Whenever Zionist outlets start praising you and giving you all kinds of accolades, then you can be sure that you were perpetuating their ideology in one way or another. It’s like Voltaire receiving awards from the Masonic Lodge. In fact, it is historically safe to say that Enlightenment writers and encyclopedists such as Voltaire, Montesquieu, Horace Walpole, D’alembert, and Diderot had a clear agenda and followed a revolutionary Weltanschauung that had its eventual root in Freemasonry,

Will Durant writes that the “Jacobite refugees from England founded in Paris the first French Freemasonry lodge. Montesquieu joined it, and several members of the high nobility. It served as a refuge for deists and as a center of political intrigue; it became a channel of English influence, and prepared the way for the philosophers.”[2]

In any way, the New York Times and the Washington Post, the very news outlets which perpetuated the Iraq War, are now praising the late John McCain for his great work.[3] The Washington Post goes so far as to say that McCain is “the irreplaceable American.”[4] Sure, McCain fought in Vietnam. But is that a carte blanche to advance perpetual wars around the globe?

Here are 11 countries that McCain wanted to destroy for his bosses. As we pointed out in the previous article, we all know who his bosses are by now.

McCain wanted to destroy Iraq. As a matter of fact, he cheered for the Iraq debacle. As the Arizona Republic told us way back in 2007,

“As the Bush administration made its case for pre-emptive war against Iraq, which was then suspected of stockpiling chemical and biological weapons of mass destruction, McCain became a top national spokesman for ‘regime change.

“Speaking Oct. 10, 2002, on the Senate floor, McCain called Iraqi leader Saddam Hussein ‘a megalomaniacal tyrant whose cruelty and offense to the norms of civilization are infamous.’ Saddam’s government, McCain warned, ‘is a clear and present danger to the United States of America.’”[5]

McCain was just getting started. He moved on to say:

“He has developed stocks of germs and toxins in sufficient quantities to kill the entire population of the earth multiple times. He has placed weapons laden with these poisons on alert to fire at his neighbors within minutes, not hours, and has devolved authority to fire them to subordinates. He develops nuclear weapons with which he would hold his neighbors and us hostage.

“No, this is not just another self-serving, oil-rich potentate. He is the worst kind of modern-day tyrant – a conscienceless murderer who aspires to omnipotence who has repeatedly committed irrational acts since seizing power. Given this reality, containment and deterrence and international inspections will work no better than the Maginot Line did 62 years ago.”[6] 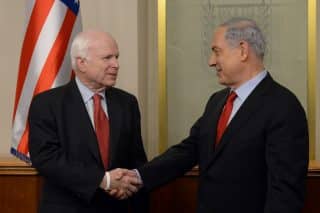 McCain again supported the American invasion of Afghanistan. During the invasion, he wrote in the Wall Street Journal: “No substitute for victory: war is hell. Let’s get on with it.”[7] This was the late John McCain at his best:

“War is a miserable business. The lives of a nation’s finest patriots are sacrificed. Innocent people suffer and die. Commerce is disrupted, economies are damaged. Strategic interests shielded by years of patient statecraft are endangered as the exigencies of war and diplomacy conflict.

“However heady the appeal of a call to arms, however just the cause, we should still shed a tear for all that will be lost when war claims its wages from us. Shed a tear, and then get on with the business of killing our enemies as quickly as we can, and as ruthlessly as we must. Complete Destruction. There is no avoiding the war we are in today, any more than we could have avoided world war after our fleet was bombed at Pearl Harbor.”[8]

McCain could not tell his readers that the war machine and ethnic cleansers like himself have always tried to find a dumb excuse to go to war. Pearl Harbor, as my dear friend Mark Dankof and I have argued in the past, was a deliberate false flag operation.

John McCain was a strong supporter of the Syrian rebels/terrorists in Syria. As the Guardian itself declared in 2015:

“A delegation of senators led by John McCain have met separately with Saudi Arabia’s Crown Prince Salman and the emir of Qatar, as part of a regional tour focused on training Syrian rebels.”[9]

McCain himself met those terrorists.[10]

McCain, we are told, “was an especially vocal supporter of the 2011 military intervention in Libya. In April of that year he visited the Anti-Gaddafi forces and National Transitional Council in Benghazi, the highest-ranking American to do so, and said that the rebel forces were ‘my heroes’” He was essentially calling terrorists his heroes.

McCain, like his buddy John Bolton, is known for singing the “bomb Iran” song. McCain declared back in 2015:

“The Israelis will need to chart their own path of resistance. On the Iranian nuclear deal, they may have to go rogue. Let’s hope their warnings have not been mere bluffs. Israel survived its first 19 years without meaningful U.S. patronage.”[11]

McCain also wanted the United States to support cover operations in Bosnia, Ukraine, Russia, North Korea, and even China. Now you can see why this man was getting all kinds of accolade from the war machine. The late Michael Collins Piper discovered the media bias on John McCain way back in 2008, when he wrote his article, “Now It’s The Post Covering Up John McCain’s Mob Connections.”[12] Back in 2015, Gordon Duff again wrote:

Here are the facts as we know them:

According to Colonel Ted Guy, John McCain’s commander as a POW, McCain collaborated with the enemy.

McCain is accused of making over 30 propaganda broadcasts against the US, broadcasts he moved to have classified when he was elected to the senate.

Vietnam was a useless war.  I served in Vietnam as a Marine combat infantryman and know the war well close up.

Nick Turse, author of Kill Anything That Moves: The Real American War in Vietnam, would absolutely agree with Duff here.

So should we sympathize for a human being who lost his life? Should we send our condolence to the family? The answer is yes. But should we put a stamp of approval on what McCain did to the Middle East and America?