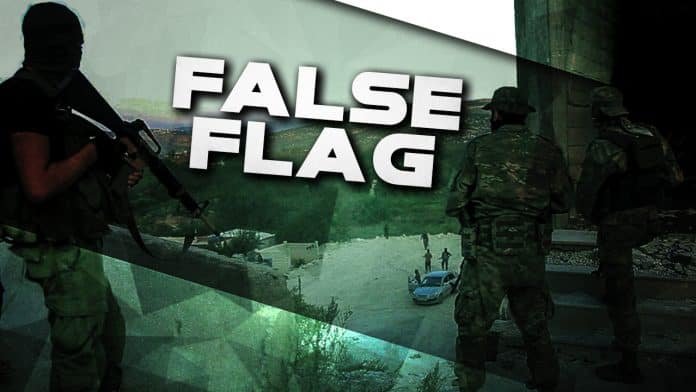 Editor’s note: Southfront is careful not to say what I am about to.  This is entirely the work of the Deep State led by Benjamin Netanyahu and his puppet, Donald Trump.  End of story.

“Foreign specialists” arrived in Syria to stage a chemical attack, which will be blamed on the Damascus government, Russian Defense Ministry’s spokesman Maj. Gen. Igor Konashenkov said on August 25 warning that the staging of the incident may happen soon. According to the military spokesman, the “English-speaking specialists” arrived in the Hbit settlement in southern Idlib.

“In the most populated area of Kafr Zita, preparations are being made for a group of residents brought from the north of the province to participate in the staging of an “attack” of allegedly chemical munitions and bombs by Syrian government forces, staged assistance by mimicked ‘rescuers’ from the “White Helmets” and the shooting of video for distribution to the Middle East and English-language media,” Maj. Gen. Konashenkov said.

He emphasized that this situation one again confirms that foreign forces are seeking to “severely destabilize the situation and disrupt the steady dynamics of the ongoing peace process.”

The Russian military pointed out that this staged attack is deigned to create a pretext for new US-led missile strikes on government facilities in the war-torn country. According to Konashenkov, Washington is already preparing for this move: the US Navy’s destroyer Sullivans with 56 cruise missiles on board arrived in the Persian Gulf several days ago while a B-1B strategic bomber of the US Air Force armed with AGM-158 JASSM air-to-surface missiles was deployed to the al-Udeid air base in Qatar.

Separately, the head of the Russian Center for Reconciliation of the Opposing Sides in Syria, Maj. Gen. Alexei Tsygankov revealed that thousands of militants with heavy weaponry and armored vehicles have gathered in the province of Idlib preparing for an offensive on government-controlled areas in Hama and Aleppo.

The militants’ preparations are ongoing amid continued tensions between them and government forces at the contact line in the Idlib de-escalation zone. On August 26, the Syrian Army carried out artillery strikes on Hayat Tahrir al-Sham positions in the villages of Khuwayn and al-Tamanah in southern Idlib and a HQ of Jaysh al-Izza near the village of al-Zakah in northern Hama. According to pro-government sources, the strikes destroyed several vehicles used by militants to build fortifications in these areas as well as eliminated several militant groups‘ fighters.

The situation in the Idlib de-escalation zone remains unstable and it will remain unstable until Hayat Tahrir al-Sham and its allies are able to operate in the area.