Monsanto has suppressed the facts about its ‘probably carcinogenic’ weed killer for years, pouring vast sums of money towards complicit ‘democratic regimes’, a lawyer suing the chemical giant in 16 cancer cases has told RT.

Monsanto has been barraged with fresh lawsuits lately, after a California jury ordered it to pay $39 million in compensation and $250 million in punitive damages to a groundskeeper in a landmark case a couple of weeks ago. DeWayne Johnson, 46, alleged that he had developed non-Hodgkin’s lymphoma after using Monsanto’s herbicides, including the infamous Roundup.

The verdict has spurred an avalanche of similar lawsuits, with their number rising from 5,200 to 8,000 in an instant, threatening Monsanto’s new owners, Bayer, with potential penalties totaling billions of dollars.

“The politics behind it is appalling. When you take a look at the politics, oddly enough, the democratic regime has done most to keep Monsanto out there with their product, they’ve protected it at every turn of the road. The Department of Justice should have been looking at it a long time ago.”

While the studies pointing to the risks from using the herbicide kept coming out, the company continued to brush off the reports. The reason it remained unscathed is rooted in its vast financial resources, Papantonio believes.

“Politics is tough to overcome when you have a multi-billion-dollar corporation that gives so much money to politics…That’s why we are just now learning a lot of this.”

Another tactic the agricultural giant used to whitewash its image is to sponsor studies that would prop up its claim that Roundup does not pose any substantial risk to human health, the lawyer added. He pointed out how the tobacco industry used a similar approach to shield itself from repercussions. 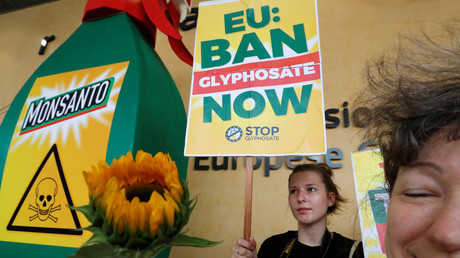 “That is phonied-up science, that’s why it’s still on the market.”

A recent study by the non-profit Environmental Working Group found that 31 kinds of breakfast cereals popular in the US contain dangerously high levels of glyphosate. The health scare prompted a day care company in Chicago to go as far as to ban Cheerios oatmeal.

Papantonio believes that if the companies feel they have been misled by Monsanto about the safety of the oats, the best way would be to sue the company.

“If I were advising the people that are actually making these cereals, they really had better protect themselves – first, by not buying the products that are contaminated with glyphosate, – but they already have a problem. The best way to protect themselves is to initiate lawsuits against Monsanto.”

Either way, Papantonio is sure that Monsanto’s ship is sinking, and Johnson’s verdict and the rising number of looming trials are “just the beginning” of “an absolute horror show for Monsanto.”