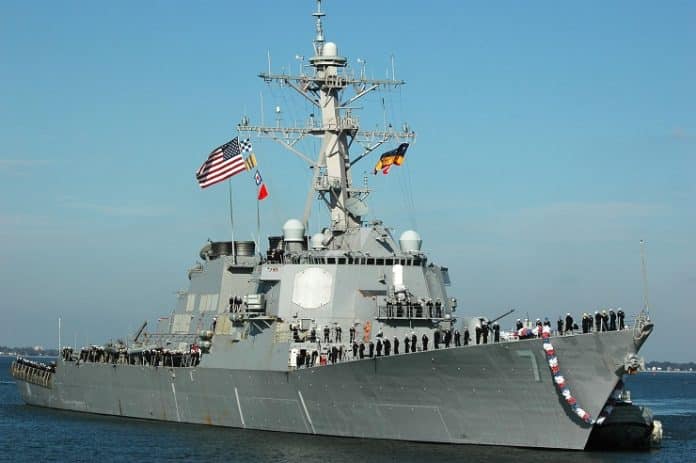 What is driving America’s anti-Russian policy, the sanctions, backing terrorists in Syria, mischief in Ukraine, plotting against Crimea, Marines in Norway and nukes and missiles everywhere? It makes no sense if the public narrative or narratives are to be believed.

Moreover, what may be most telling of all, is the absolute level of censorship in the US media over issues in Syria, issues that may well push the world to nuclear war. Not only is only one side of the story being told, but social media and the internet itself, has been cleansed of any mention of American complicity in White Helmet abuses, backing al Qaeda and ISIS, redeploying terrorists to Afghanistan or testing and deploying biological weapons against Russia, Africa and the Middle East.

August of 2018 draws to a close with reports out of Russian media that the United States is deploying guided missile destroyers to the Persian Gulf and Mediterranean in order to retaliate against Syria for poison gas attacks that have not yet happened. From Russia Today:

“In a statement published on Monday, the Russian MoD said it noted the deployment to the Mediterranean last weekend of the missile destroyer USS Ross carrying 28 Tomahawk cruise missiles on board. It came after a similar move of the USS The Sullivans to the Persian Gulf and the rebasing of a B-1B Lancer strategic bomber to an air base in Qatar. The Russian ministry said the “preparations are the latest evidence of the US intention to use the” expected provocation.

The statement reiterated that the Hay’at Tahrir al-Sham militant group, previously known as Al-Nusra Front, was preparing a staged chlorine attack in a city in Idlib. It alleged that a group of jihadists, trained in the handling of chemical weapons by the British private military contractor Olive Group, has already arrived in Jisr al-Shughur. The group will “stage decontamination of victims of a staged chemical weapons attack posing as members of the notorious White Helmets group,” the ministry claimed.

“The implementation of this provocation, which is being conducted with the assistance of the British intelligence services, is meant to serve as the latest pretext for the US, Britain and France to deliver a missile strike against state and economic facilities in Syria,” said General Igor Konashenkov, spokesman for the Russian Defense Ministry.

On August 22, US National Security Advisor John Bolton stated that ‘if the Syrian regime uses chemical weapons, we will respond very strongly and they really ought to think about this a long time.’”

Russia is left with various levels of response and has a choice to say “enough is enough” and fight back against what very well seems to be tyranny on the part of the United States on a global scale, a very difficult thing for an American, a former US Marine to write about, or try to leverage the US into an outbreak of reason and sanity.

“Russian MPs believe that the United States has crossed the red line in the policy of pressure on Russia through sanctions. They alluded to a possibility of deploying Russian nuclear weapons in the Middle East, namely in Syria.

‘I think that Russia should also draw its own red lines,’ first deputy chairman of the State Duma Committee on Economic Policy, Innovative Development and Entrepreneurship, Vladimir Gutenev, said. ‘It is about time experts should consider option of asymmetric responses to the United States that would level off their sanctions and cause them to suffer counter damage,’ the official said.

The MP believes that Russia could deploy tactical nuclear weapons in other countries, for example, in Syria. Russia could also switch to cryptocurrencies for arms deals. To crown it all, Russia may pull out from several landmark treaties with the USA, including the non-proliferation of missile technologies.”

Note that this is a Russia member of parliament, not the Ministry of Defense but also note that it is reported in Pravda, not in the Western press. The story, of course, reminds the US of its own policies as America has been forced, in recent days, to secretly remove its arsenal of over 80 B61 nuclear weapons from Incirlik Air Base in Turkey due to fears of their seizure by Turkish military loyal to President Erdogan.

Real moves by the Ministry of Defense, including deploying significant naval reinforcements to the Mediterranean, raise the stakes in what is predicted to be an upcoming confrontation with the US over a predicted attack on Damascus.

Where this instance may differ from earlier instances is that the Russian Ministry of Defense has predicted the American abuse, naming those involved, giving details and pointing out the redeployment of American forces, thus proving US complicity in WMD attacks, real or staged, on Syrian civilians.

This leaves Russia with options, chief among which is to use air defense capabilities against American planes and missiles. Russia has always been informed in advance and has, officially at least, stepped aside and left President Assad and his heroic and battered nation to fend for itself against abuses by the US, Britain and France.

That may well be at an end.

Were Russia, after the weeks of warnings has given the US, to allow an attack on Syria without a response, this might well represent a red line for President Putin.

The question we ask then is simple. Has destabilization of Russia been the goal all along, taking advantage of Russia’s weakened financial state and its smaller military along with President Putin’s history of reason and sanity?

Is the Deep State, most likely at this point led by those tied to Israeli interests, were one to note who is actually controlling social media and the Western press, using the inherent weakness built into America’s various systems, weak election oversight, a congress paid for by lobbyists, a massive criminally led military industrial complex and a generation of gutless military leaders, to force Russia into a confrontation with the US that might well destroy both?

As background, one issue has pushed itself into the forefront with the death of Senator John McCain, an outspoken critic of President Trump. The dispute between the two largely originates with McCain’s publication of the now famous “dossier” that accuses Trump of sexual deviancy and complicity with criminal elements among Russia’s elites.

Why this is relevant now is related to the continual statements by Trump and his surrogates, always turning to issues of the “dossier” and an incessant need to crush anyone who refers to it or attack the Clinton family whenever the dossier is mentioned.

Remember, it was John McCain, the head of both defense and intelligence committees in the US congress for decades, that analyzed the dossier. McCain has had the highest-level access to American and, in particular, Israeli intelligence of anyone in American government, even higher security clearance than a CIA director.

This is where we conclude, with America pushing Russia, a nation continually accused of blackmailing Donald Trump. There would, in fact, be no Mueller investigation of “Russian interference” unless the dossier were accepted by the FBI as fact.

But is it? Then again, does the dossier itself, which sources indicate is reputed by DC insiders to be “soft material” compared to the real truth about Trump and his roots with infamous “commie hater” Roy Cohn, point at Russia or simply that Trump has provided any investigator a wealth of vilifying material?

Trump’s policies on Russia and Syria, initially at least, held promise of cooperation with Russia against terrorism and an end of America’s role as aggressor around the world. In fact, however, Trump has opened trade wars, put Turkey in his sights, killed a treaty with Iran and is bankrupting America with runaway weapons spending.

America is now going bankrupt at record levels with years of trillion dollar plus deficits scheduled and runaway trade deficits as well. Only the stock markets go up, wages go down, the standard of living is crashing, prices raise every day, America’s domestic survival is obviously of little or no concern to those served by Trump.

But are they Russian?

If there is a Russian dossier, how about the one Israel holds? Trump’s longtime partner in “partying,” convicted billionaire pedophile Jeffrey Epstein, a longtime Israeli operative, has a dossier of his own.

So does Felix Sater, accused mob kingpin and Israeli/American “man of the year” in 2012 who helped finance Trump when his empire was crumbling.

We see the stakes, a military confrontation between the US and Russia over Syria. We then look at who gains when both lose.