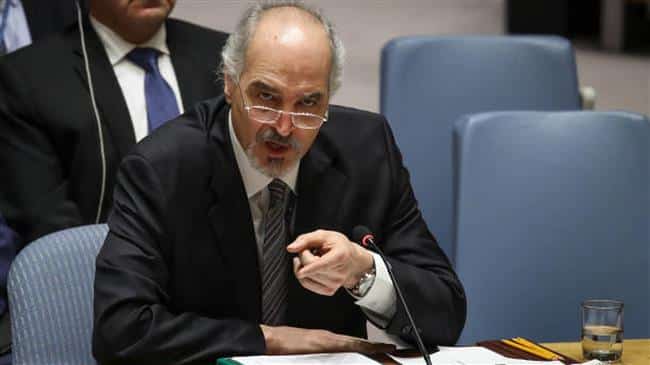 [ Editor’s Note: This desperate ploy to disrupt the coming SAA attack on Idlib is probably the most blown false flag attack in history. We have always wondered why Russia had not been more aggressive in exposing these in the past, despite its revealing some of their Intel capabilities.

VT has been publicly more on the front lines of this issue that Moscow. Taking these attacks to the UN should have been done long ago…but better late than never.

We suspect that Trump is doing this at Bibi’s request, where we can’t find Trump refusing to do anything that America’s secret co-President wants. Congress of course is in the same boat. Whatever Israel wants, it gets.

Even Obama, who had no problem with the proxy terror war on Syria, a huge stain on his legacy, did not bow down to Jewish Jihadis in the Likud party, which is more ruthless than ISIS.

So hurrah for Moscow for getting its act together, showing some preemptive moves to try to bring public pressure to stop these attacks. VT urges all our readers to call the White House and their Congressmen to demand these attacks stop and to investigate their having been going on way too long … Jim W. Dean ]

Syria provides the United Nations with evidence revealing yet another plot by Takfiri terrorists to carry out a chemical attack in militant-held Idlib Province and pin the blame on Damascus with the aim of justifying an ensuing act of aggression against the Arab country by their foreign supporters.

Speaking at a UN Security Council meeting on Tuesday, Syria’s Ambassador to the UN Bashar Ja’afari said that Jabhat al-Nusra and its affiliated terrorist groups are preparing to use chemical weapons against civilians in Idlib, the last major militant stronghold that is subject to an upcoming major counter-terrorism operation by the Syrian army.

The Western states, which support terror outfits operating in Syria, would then use the chemical attack as a pretext to launch an offensive against the country, he added.

Certain Western states, he said, are using their “black flags and White Helmets” to stage new chemical attacks in order to obstruct the political process and justify their aggression against Syria, he said.

A new report says that the White Helmets coordinate with Nusra terrorists to stage a chemical attack in Syria’s Idlib.

The Syrian envoy further called on countries capable of influencing terrorists to prevent their agents from taking any action against the Syrian people.

On April 7, an alleged chemical weapons attack hit the Damascus suburb town of Douma,  just as the Syrian army was about to win the battle against the militants there.

Western states blamed the Syrian government for the incident, but Damascus firmly rejected the accusation.

One week after the suspected gas attack, the US, Britain and France launched a coordinated missile strike against sites and research facilities near Damascus and Homs with the purported goal of paralyzing the Syrian government’s capability to produce chemicals.

Elsewhere in his remarks, Ja’afari reaffirmed that Syria considers the use of chemical weapons immoral and had already had all its chemical arsenal destroyed.

He also said that Israel’s nuclear, chemical, and biological arsenal is waiting for the “blessing” of the UN Security Council. Syria surrendered its entire chemical stockpile in 2013 to a mission led by the Prohibition of Chemical Weapons (OPCW) and the UN.

Additionally on Tuesday, Russia’s Ambassador to the UN Vasily Nebenzya told the Security Council that White Helmets “volunteers” had transferred two toxic gas containers to Idlib, where they already had eight containers, with the intent of using them against civilians in order to justify a new strike by Washington, London and Paris.

“We are deeply concerned of the warnings of our Western partners on the possible use by the Syrian Regime – as they call – it of chemical weapons.

We consider it as an invitation to the armed rebel groups to stage another chemical attacks as they did in Eastern Ghouta and Douma early in April or early in Khan Shaykhun, as a pretext of military strikes against Syria. We see these preparations, we see the military build-up and we strongly warned against it,” he said.

Nebenzya also estimated that Takfiri terrorists were holding over two million people in Idlib hostage and preventing them from leaving the province.