Sergey Lavrov reiterated the warning that a staged chemical weapons attack in Syria’s Idlib province may trigger a US-led attack on the forces loyal to Damascus.

READ MORE: US & allies can have missiles ready to strike Syria within 24 hours – Russian Foreign Ministry

“A new provocation is being prepared by the West to hamper the anti-terrorist operation in Idlib,” Lavrov said during a joint media conference with his Syrian counterpart, Walid Muallem. “We have facts on the table and have issued a strong warning to our Western partners through our Defense Ministry and our Foreign Ministry not to play with fire.” 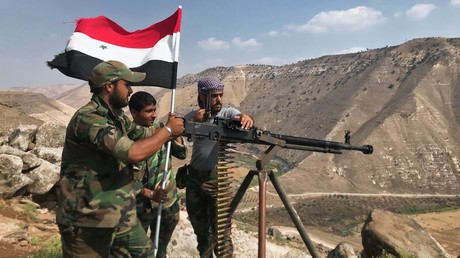 Earlier, the Russian military reported that a group of militants in Syria was preparing a provocation, in which chlorine gas would be used to frame the Syrian government forces. The incident would be used by the US and its allies to justify a new attack against the country, similar to what happened in April, according to the claim.

Amid international tensions, Russia has launched a massive naval exercise in the Mediterranean Sea, which involves 25 ships and 30 aircraft, including Tu-160 strategic bombers.

The US earlier stated that it would retaliate to a possible a chemical attack by the Syrian government, using more firepower than it did in April. The previous tripartite strike by the US, the UK and France targeted what they called sites involved in chemical weapons research. It came in response to an alleged use of an improvised chlorine bomb against a militant-held area. Russia insists that the incident had been staged with the goal of triggering the Western response.