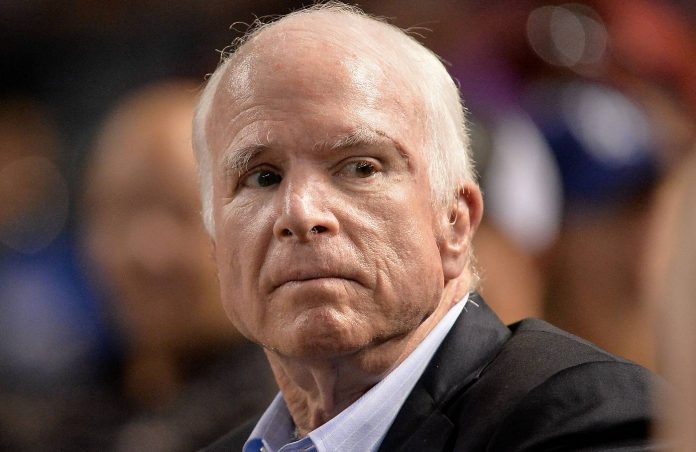 If I were a little American boy and I asked my grandfather who modestly kept his medals given for Vietnam War service in a secluded place, which heroes should I imitate, what would my grandfather tell me?

Would he have called out the name McCain, who left this mortal world the other day? Would he call his stay in captivity a heroic feat, or his daring flights above peaceful huts which he condemned to flames of napalm?

Maybe his former service buddies would tell of McCain’s heroic acts, remembering how brave and self-denying was the hero of the war? Or for others, their spit would be full of disgust, saying that even to remember his name they do not want.  Perhaps because many of their friends never returned from captivity only because McCain swore that no American soldiers were left behind in Vietnam, and no one who could do anything meaningful cared about their fate.

If a country chooses a hero like McCain, what can you say about such a country? And what future awaits this country, when thousands of boys will grow up, inspired to become a hero, but who would betray their brother-soldiers ingloriously. If that cowardly behavior wasn’t enough to cement a legacy of shame, McCain resting on false laurels of military glory, became a senator perennially calling for bombs and missiles to rain on heads of women, children and the elderly in Iraq, Libya, Syria, Donbass, Yemen, Afghanistan?

We do not know how the endless human suffering of people who never did harm to America will respond to the afterlife of McCain, but he escaped their earthly judgment.

There are allegations that he honestly served his country. Yes, he served, but he did this for America? Returning from the war, he with constant persistence threw his country into more and more new wars.

Some moralists saw in the critical epitaphs of McCain’s death unseemly gloating. But where do you see the evil that people rejoice? The death of McCain was hardly evil, but deliverance, the liberation of human society from one of the incarnations of evil.

I would like to believe that with McCain the epoch of corrupt politicians and cowardly war heroes will end. But this hope melts when I see right before our very eyes, his death and false media envelops the romantic tale linking his name to the lofty label “hero” of victorious wars, which of course McCain and Vietnam were definitely not.

Someone will say without fail that he fought in that war on the orders of the Supreme Commander-in-Chief. But he was there and saw with his own eyes, on whose heads the bombs and napalm dropped from his plane.

And he did not sob in horror or remorse when he saw the bodies of lifeless Vietnamese children. One account of his capture tells of his rescue by Russian officers who prevented local villagers from hacking McCain with axes, venting their rage for the war crime of indiscriminate use of chemical weapons on defenseless civilians.

But, were they for him people? They were only savages, who became dangerous for his country because of the belief these simple Asian peoples would embrace communism. And he was a liberator and an angel bearing justice on wings of death.

McCain grew to like this role, and embrace it with unusual vigor, when offered more extensive opportunities to kill savages wherever they are – in Iraq, in Libya, in Syria, in Yemen, in Gaza and the Donbas.

I remember another veteran of a war, he was also in captivity and saw with his own eyes what terrible suffering his army brought to the people of the country where he fought. He returned from Soviet captivity to Germany and devoted his life to the war against war. He remembered the kindness of people from whom he was in captivity and dreamed of returning to the mining town of Kopeisk, Chelyabinsk region, to see endless birch forests again. He fulfilled his dream, having already arrived at an advanced age in the South Urals. He was the anti-fascist writer Erich Fischer – a true hero.

It’s regretful to see how a sorrowful howl suddenly rose in Russia, a country that the senator hated with particular vehemence. And this is not actress Akhedzhakova with her discriminating desire to find solace in unrealistic and impossible solutions.

This is neither much nor little, cried Leonid Slutsky! “American Republican senator John McCain was not a friend of Russia, but he was a true patriot of his country.” As the chairman of the State Duma Committee for International Affairs, Slutsky expressed his condolences to the senator’s family for their loss.

Gentlemen, you must decide once, whose shoes to lick! One day you drink champagne right in the State Duma on the occasion of Trump’s election as President of the United States, another day you are weeping over a person who could not tolerate Trump and even left a special order before his death not to invite him to his funeral.

Not the yellow press, but the Russian Parliamentary Newspaper reports: “The line on the frenzied confrontation with Moscow was quite a large part of his activities in Congress and Washington’s politics. But we can’t avoid saying that this was a courageous and principled man, a patriot of his country, who endured his share of trials during his lifetime. Condolences to the family and friends of the senator and the entire American people.”

Should the American people be grateful to the patriot for the madness of Russo-phobia that unfolded over the past four years in the United States? Real patriots of America believe that in modern conditions, the confrontation with Russia will lead to an imminent and irreversible catastrophe.

Playing such games to feign nobility and forgiveness under the current circumstances is suicidal. A clumsy expression of love and devotion to the “courageous and principled patriot of America” ​​can only cause a reaction of stupor.

What else is necessary for American hawks to conjure such things as new sanctions and travel bans against Russia? When will Russian lawmakers finally discover the beginnings of patriotism in themselves?

As the media in America strives to canonize McCain as an American hero worthy of worship to inspire our children and teach them lessons of patriotism and heroism, it leaves those among us with bitter taste of hypocrisy.

Younger generations do need heroes and patriots who will lead the nation once again to traditional ideals based on morality and ethics.  I see the seeds of this revival in Russia and hope the spirit of renewal will sweep across America as well.