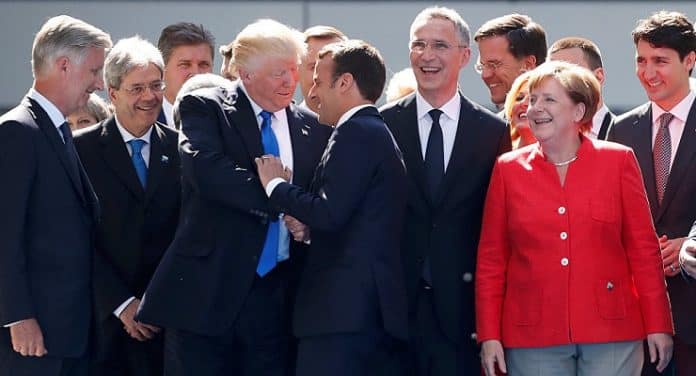 [ Editor’s Note: While the EU is talking about being independent from the US, actually doing it is another thing. The EU has had no problem ignoring its agreed-upon NATO contributions for decades, happy to see the dumb American taxpayers never even discuss it during election years.

That left Trump an opening to be “different”, and he struck a chord that others had ignored. Europe’s social welfare systems have been effectively subsidized by their not paying NATO dues, during a period where the US has been cutting back on social funding.

There are calls now to cut veteran benefits, reduce social security, increase Medicare co-pays, etc. They have not been front-burner topics, but the kind of things the politicians try to slip into a big bill at a time when the public is distracted, as with the continuous turmoil Trump has created to keep the media-focus on himself.

If the EU really is ignoring the Russia sanctions as stated below – and I have heard nothing about that being the case on a broad scale – and if the EU is holding together on trying to save the JCPOA, this is a major historical shift in EU-US relations.

The proof in the pudding is how the EU can blunt the US sanctions on its core when has them in a compromised position. Don’t forget the background chaos, and the uncertainty of the Brexit deal.

We have heard the EU’s intent, but nothing as to how it will do it, and the same goes for saving the Iran trade deals they would love to have. Meanwhile, back in Trump Land we hear Mexico has gotten a trade deal and Canada is left whistling Dixie. What a year this is turning out to be… Jim W. Dean ]

In his yearly speech to his country’s ambassadors, French President Emanuel Macron echoed recent remarks by Germany’s Angela Merkel that Europe can no longer count on the US to guarantee its safety and sovereignty, but must fend for itself.

Most significantly, he added: “We must understand the consequences of the end of the Cold War and reconsider our alliances.”

As one French commentator on France 24 pointed out, Macron doesn’t want to cut ties with the US, but he does want to modify them. Pointing out that France will chair next year’s G7, to be followed by the US the year after, meaning that the two countries must work closely, the French president’s casual remark masked a bombshell: France will emphasize dialogue with China India Russia – maybe even invite them to attend on the second day.

It will be remembered that last year, President Trump was roundly chastised for suggesting that Russia be reinstated into the G7, making it once again the G8. If Macron has his way, Europe’ will do what the American president was not permitted to do — never mind that at the time, they obediently followed America’s hawks rather than its president.

It would appear that contrary to what I wrote in 2016, Europe is finally getting its act together, at least with respect to Russia, thanks to the effect America’s anti-Russian sanctions are having on its economy. That decision, which President Trump has been unable to undo, is achieving what seventy years of soft subservience to US diktats failed to do: begin to fray the leash that has tethered Europe to the US for seventy years.

As long as US-imposed neo-liberal policies only hurt the European welfare state, they were supinely accepted. But sanctions against Russia affect agriculture and industry’s bottom lines, and since Trump is powerless to rescind them, Europe has finally got up the courage to ignore them.

The problem is that while it has made giant strides toward liberating itself from American hegemony, Europe has made less progress in defeating its older enemy: intolerance. Centuries of mutual enmity between competing rulers sandwiched together on the relatively small Eurasian peninsula appeared to have faded under multi-national rule from Brussels.

However, this had barely been achieved when old demons slipped through the cracks: anti-Semitism has largely been replaced by US-inspired loyalty to Israel, however, Europe is still unable to act as one to stem the tide of Muslim immigrants.

This failure in turn has led to the rise of fascist-leaning parties determined to make their own rules: while France’s National Front (now known more ominously as The Front), as well as the countries of Eastern Europe had a history of anti-Semitism before it rejected Muslims, Germany came straight from atoning for the Holocaust to opposing the Muslim immigration decreed by Chancellor Merkel, the East German-educated defender of the European Community’s Enlightenment values.

Most surprising perhaps to lovers of Italy’s specific Mediterranean charm, has been the meteoric rise of the far-right League (formerly the Northern League) which, while accepting as its junior partner the Five Star Movement created by a comic actor, increasingly reads from the Mussolini playbook.

The new minister of the interior, Matteo Salvini, also speaks as Deputy Prime Minister when he declares that African migrants stranded on rescue ships in the Mediterranean will only see Italy on the back of a post-card, unless other European countries step up to their responsibilities by sharing the burden.

In a striking reversal of the long-standing primacy of Western Europe, Hungary’s president Viktor Orban set the tone when he put up barbed wire fences to keep African and Middle Eastern immigrants from entering his ‘Christian country’, followed by his Eastern European neighbors, Poland and (the former) Czechoslovakia.

Having lived in Eastern Europe in the sixties, I’m certain that many of its inhabitants see their rejection of Muslims as payback for three or four hundred years of Ottoman occupation.

When Macron echoed Merkel’s earlier assertion that Europe must take responsibility for itself, he was hopefully burying the hatchet fashioned under Charlemagne; however while saving Europe from being the inevitable battleground between the US and Russia, this cannot reverse the fact that Caucasians represent only sixteen percent of the world population, no more than can the erection of frontier barriers.

Deena Stryker is an international expert, author and journalist that has been at the forefront of international politics for over thirty years, exlusively for the online journal “New Eastern Outlook”.