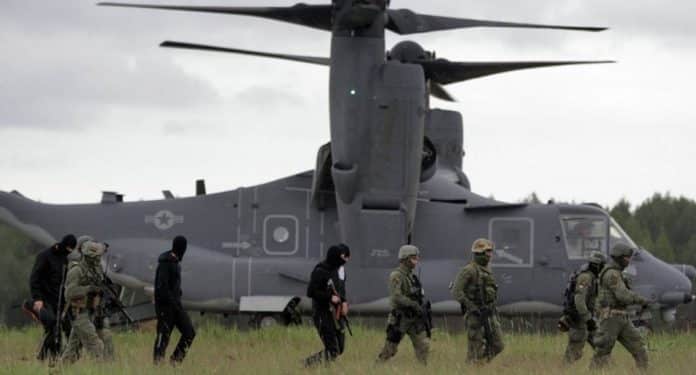 The United States and Turkey, as of the second week of August 2018, are ready to break off diplomatic relations as a result of broad US sanctions on Turkey. However, not only is Turkey a full NATO member, an organization whose charter legally prohibits President Trump’s actions under its “mutual assistance” tenets, but Turkey also hosts US forces as well.

Trump “tweeted” his opening attack on Turkey as follows, obviously unaware of the thousands of American troops in and around Turkey, dependent on that nation’s cooperation and good will:

“I have just authorized a doubling of Tariffs on Steel and Aluminum with respect to Turkey as their currency, the Turkish Lira, slides rapidly downward against our very strong Dollar! Aluminum will now be 20% and Steel 50%. Relations with Turkey and the United States are not good at this time.”

These forces may well be expelled from Turkey at any time. Among those forces is a nuclear weapons command with an estimated 84 B61 nuclear weapons and two dozen specially modified F16 aircraft capable of supporting thermonuclear warfare against targets in the Middle East from Turkish soil.

Additionally, the US keeps a Rapid Deployment Corps near Istanbul, maintains a base in Izmir, one in Kurecik and another in Diyarbakir. There are also Patriot missile batteries and supporting radar stationed in Turkey to support American military action, allegedly against ISIS.

Beyond that, the US maintains a massive CIA presence in Turkey including thousands of CIA and State Department contractors in Hatay Province who support “moderate opposition” commands in Syria’s Idlib Province but are also alleged to support both ISIS and al Qaeda forces as well, according to Russia’s Ministries of Defense and Foreign Ministry.

Beyond that, America supplies its military forces inside Syria and Iraq through Turkey. All the while, the US has supported Kurdish organizations inside Syria, the longstanding conflict between the Kurdish peoples and Turkey has created a backdrop for US “mischief making” against Turkey, part of what Turkey’s President Erdogan sees as an America/Israel move to castrate and balkanize Turkey.

On August 8, 2018, the United States, or rather President Trump, announced a doubling of tariffs on Turkey steel and aluminum. With the Turkish lira at record lows against the dollar, Turkey faces an economic melt-down clearly ordered by Trump personally.

The rationale used by the US, ostensibly, is the continued detention of an American cleric, Andrew Brunson, for his ties to outlawed Turkish banking and media magnate and cleric, Fethullah Gulen.

Sources in Turkey claim Brunson acted as a CIA asset for two dozen years in Turkey, working in conjunction with the Gulen organization and CIA infiltrated and operated aid groups and NGO’s like the White Helmets and the Union of Medical Care and Relief Organizations.

The CIA has a long history of using clerics, something learned from the British who used missionaries in Africa, India and China as intelligence sources from the 18th century onward. For America, the practice can only be traced to rough beginnings, John Birch in China with the OSS (Office of Strategic Services, forerunner of today’s CIA) or with extremists like Koran burning Terry Jones, a 12-year Gladio operative expelled from Germany.

Gladio was set up to be a stay-behind guerilla network of Freemasons and other targeted groups that morphed, in the 1970s into a number of terror organizations. Gladio operatives kidnapped and murdered Italian Prime Minister Aldo Moro and were responsible for decades of bombings across Europe.

With Turkey, the US had chosen the Gulen organization, with its powerful network reaching from Pakistan, into the Caspian Basin and Caucuses, operating schools and controlling key government posts in half a dozen nations. “Gulenites” represent an elite that includes military officers and civil servants, part of a network that covers a media and banking empire but also fosters strong interrelationships in trade and commerce as well.

As to whether Gulen himself, having fled to the US in 1999, openly sided with the US against Turkey or was unable to prevent his organization from being coopted, remains to be seen. Either way, Turkey’s President Erdogan blames not only Gulen but the CIA for the attempt on his life during the 2016 coup attempt.

One thing is clear, as we observe Trump’s history, his actions are driven out of Tel Aviv/Jerusalem rather than Washington and is responding to the rapid decline in Israel-Turkey relations rather than acting as a NATO partner.

To this end, walking away from Turkey as a strategic partner in the region is a hideous error, not Trump’s first by any means.

Trump’s gross income from his Turkish partners, since 2015, has been $1-5 million only, a paltry sum to Trump.

Additionally, when it comes to conflicts of interest, Trump has many. Accusation are piling up that Trump’s trade wars have been “custom designed” to benefit large contributors by pushing American industries into sourcing steel, aluminum and other materials from sources close to Trump himself, sources that are price gouging a customer base now limited to fewer potential suppliers.

This given, with Trump’s personal relationships greatly enhanced by an administration deeply infected with Wall Street cronyism and blind adherence to Israel’s extremist policies, policies toward Turkey are more likely ploys intent on market manipulation more than real changes in regional foreign policy.

In fact, most American moves since Trump has taken office in no way resemble anything that could be remotely accused of as being a policy at all, coherent or not.

Perhaps its time for Erdogan to take a stand, expel the CIA and US Department of Defense from Turkey and push for NATO to expel the United States. Chances are a majority of NATO nations would support such a move.

Gordon Duff is a Marine combat veteran of the Vietnam War that has worked on veterans and POW issues for decades and consulted with governments challenged by security issues. He’s a senior editor and chairman of the board of  Veterans Today, especially for the online magazine “New Eastern Outlook.”
https://journal-neo.org/2018/09/01/why-trump-is-trying-to-crush-turkey/