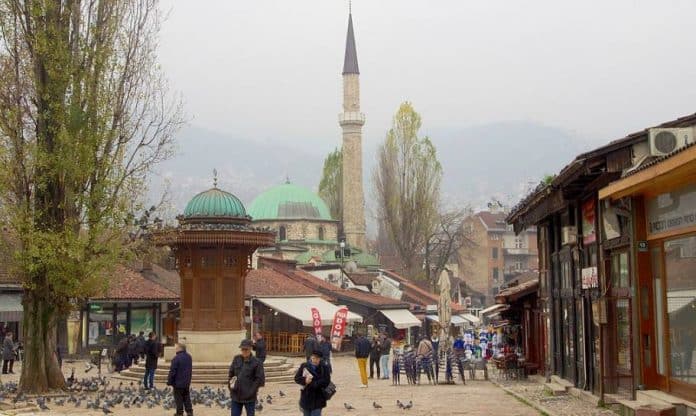 On August 23, 2018, best-selling Russian writer Zakhar Prilepin was denied entry into Bosnia-Herzegovina (B-H) on the grounds that he “represents a threat for the security and international relations” of the country, as adjudged by Bosnia’s Intelligence and Security Agency. Approving Western media reports emphasized Prilepin’s past involvement in the conflict in the Donbass region in eastern Ukraine on the side of the forces fighting against the central government in Kiev and its Russophobic policies instituted in the aftermath of the Maidan Coup in February 2014.

But Prilepin himself has never hidden this fact, and reiterated it in his interview for the Serbian-language Sputnik news agency, adding however that he had visited B-H “20-30 times” before without any problems, having met the president of the Serbian entity, Republika Srpska (B-H is made up of two political units or “entities,” the other being the Federation of B-H, with a Croat-Muslim majority), as well as globally famous film director Emir Kusturica, who runs a cultural, administrative and educational complex there. In fact, Prilepin pointed out that this was the first time that a European country had denied him entrance, as he has traveled extensively throughout Western Europe, including Italy, Germany, Switzerland and France, without any problems.

The prime minister of Republika Srpska, Zeljka Cvijanovic, marveled at the fact that, while hundreds of EU-bound migrants from the Middle East, Africa and Asia were being allowed to enter B-H each day without passports, a Russian writer with a valid passport was stopped at the border. In her opinion, this was an “orchestrated action of various B-H agencies and certain Western embassies,” and that some sort of “political list” of undesirable persons had been made up as part of a campaign of “anti-Russian hysteria.” Prilepin himself offered confirmation of the prime minister’s suspicions, saying that some of the border agents that stopped him “honestly admitted” that he wasn’t the only one on the “black list,” which also includes a number of Russian businessmen who are barred from entering the country.

Prominent security expert Dzevad Galijasevic – himself a Bosnian Muslim – also thinks that this incident is part of a deliberate anti-Russian policy and accused top B-H government figures, including the Muslim member of the B-H presidency, of declaring “silent sanctions against Russia,” while, at the same time, “only Wahhabis, mujahedeen and terrorists of the Islamic State, who are coming while impersonating migrants, are welcome to BiH,” along with people such as Tariq Mahmoud Ahmed al Sawah, whom Fox News has described as a “legendary Al Qaeda explosives expert, whose invention of the ‘shoe-bomb’ endeared him to Usama bin Laden and who may have known about 9/11 in advance.” Al Sawah was freed from Guantanamo Bay in 2016 and sent to B-H, whose top officials had no qualms about accepting him.

The outspoken president of Republika Srpska, Milorad Dodik, also pointed to the absurdity of a Russian writer being deemed a threat to B-H, while “thousands of migrants and returnees from the war in Syria” were deemed safe, declaring the ban on Prilepin’s entry into B-H as “part of the involvement of security institutions in Bosnia in the anti-Russian hysteria that is being run by some Western countries” in the run-up to general elections in B-H slated for October 7, 2018.

Indeed, especially during the past months, media throughout the Balkans have carried almost daily lamentations on the part of various Western officials, diplomats and media regarding Russia’s “malign influence” in the region, without actually offering any hard evidence. On the other hand, credible, fact-based charges regarding US meddling in the election process has been offered on more than one occasion.

For example, just a day before Prilepin was barred from entering B-H, Mr. Dodik accused the US of “meddling” in the upcoming elections, specifying, according to Reuters, that the US Agency for International Development (USAID) was “implementing its aid program through non-government organizations to conceal… its real agenda of countering Russian influence in the region,” granting funds to various non-governmental organizations “under cover of the alleged fight against crime and corruption,” and the “strengthening of independent media and NGOs,” with the funds “always” coming by way of programs run by George Soros.

That wasn’t the first time that the US was accused of meddling in Bosnia’s election. Back in May, the government of Republika Srpska submitted a report to the UN Secretary-General containing evidence pointing to serious, US-led election meddling as part of a systematic effort, by way of media financing, to influence B-H political life for the last 23 years, since the country became a de facto Western political protectorate. All told, the US has spent over $100,000,000 in media funding in B-H since the end of the civil war in 1995, most of it channeled through USAID and the US State Department through the US embassy in Sarajevo, mainly targeted against “nationalist” parties. As for the upcoming elections, the report charges, the US Congress has allocated $18 million for the so-called Economic Support and Development Fund to B-H for 2018, purportedly to “reduce vulnerabilities to Russian pressure, particularly in the energy and media sectors,” as well as “support independent media, elections, and democratic political processes.”

It is, thus, relatively easy to deduce that the banning of the Russian writer’s entry into Bosnia and Herzegovina was no local caprice, but part of a broad, systematic US effort to, under the guise of combatting alleged “Russian malign influence,” meddle in the elections of another country, specifically B-H. In that context, Zakhar Prilepin is, to use a favorite term of so-called liberal interventionists, mere “collateral damage.” Unfortunately, as the entire region is viewed on the part of Western political-military structures as a piece of “unfinished business,” at the end of which process the Balkans are to be wholly absorbed into “Euro-Atlantic” structures – which is a euphemism for NATO and the EU – Prilepin’s banning is just a foretaste of (much) worse things to come – such as a possible “color revolution” in the making against the governing nationalists in Republika Srpska – courtesy of the usual “democracy-promoting” suspects, using the “Russian meddling” excuse as a convenient pretext.