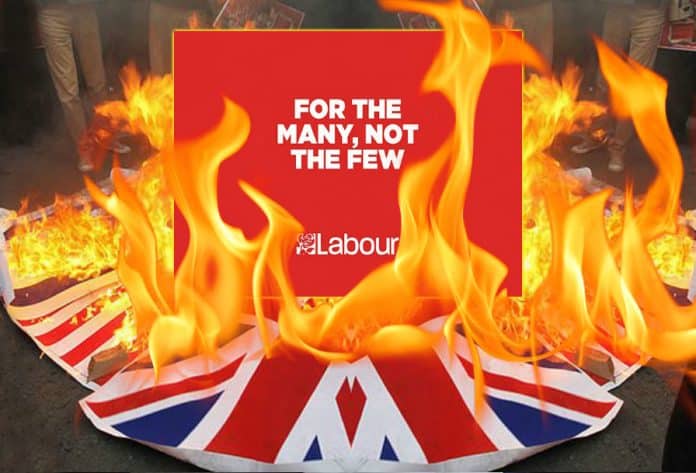 The National Executive Committee of the Labour Party will vote tomorrow (Tuesday) on whether to bow to the bullies and adopt the IHRA definition of anti-Semitism even though it has been roundly criticised by legal experts as unworkable. If they do, it will be hailed as a mighty victory for the dark forces behind the pro-Israel lobby in their bid to shut down criticism of that racist state.

More than two years ago Gilad Atzmon was viewing the Labour Party’s crazed witch hunt for “anti-Semites” with misgiving. He declared, in his usual robust way, that Labour under Jeremy Corbyn was not so much a party as a piece of Zionist-occupied territory.

Writing in his blog about Corbyn and McDonnell’s servile commitment to expel anyone whose remarks might be interpreted by the Zionist Tendency as hateful or simply upsetting to Jews, he concluded: “Corbyn’s Labour is now unequivocally a spineless club of Sabbos Goyim [which I take to mean non-Jewish dogsbodies]. The Labour party’s policies are now compatible with Jewish culture: intolerant to the core and concerned primarily with the imaginary suffering of one people only. These people are not the working class, they are probably the most privileged ethnic group in Britain…. I did not anticipate that Corbyn would become a Zionist lapdog. Corbyn was a great hope to many of us. I guess that the time has come to accept that The Left is a dead concept, it has nothing to offer.”

Amen to that last bit.

And more recently Miko Peled, former Israeli soldier and the son of a Israeli general, warned that Israel was going to “pull all the stops, they are going to smear, they are going to try anything they can to stop Corbyn” and the reason anti-Semitism is used is because they have no other argument.

Sinced then we’ve had a queue of high profile Labourites and others sticking the knife into Corbyn. Last week it was the former Chief Rabbi and Zionist extremist Lord Sacks. Then the much-respected MP Frank Field, a maverick who finally quit Labour in noisy fashion giving anti-Semitism as a reason but having grumbled for a long time about a culture of intolerance, nastiness and intimidation within the party. Yesterday we had to suffer ex-prime minister Gordon Brown mouthing off about how the IHRA definition “is something we should support unanimously, unequivocally and immediately.” He urged Corbyn to remove the “stain” of prejudice from Labour by writing the definition and all of its examples into the party’s new code of conduct.

That’s a particularly dumb thing to say considering the Home Office Select Committee urged two caveats be included and eminent legal minds Hugh Tomlinson QC and Sir Stephen Sedley pointed out how it is trumped by our right to free expression, which is part of UK domestic law by virtue of the Human Rights Act (something every Labour member ought to know and uphold), and by other conventions. Geoffrey Robertson QC also warns that it is “not fit for any purpose that seeks to use it as an adjudicative standard. It is imprecise, confusing and open to misinterpretation and even manipulation”.

Robertson adds: “The Governments ‘adoption’ of the definition has no legal effect and does not oblige public bodies to take notice of it. The definition should not be adopted, and certainly should not be applied, by public bodies unless they are clear about Article 10 of the EHCR (European Convention on Human Rights) which is binding upon them, namely that they cannot ban speech or writing about Israel unless there is a real likelihood it will lead to violence or disorder or race hatred.”

But Brown won’t be listening. He’s a dedicated pimp for Israel and a dyed-in-the-wool Zionist. In 2008, in the first speech by a British prime minister to the Israeli parliament, the Knesset, he told Israeli MPs: “Britain is your true friend. A friend in difficult times as well as in good times, a friend who will stand beside you whenever your peace, your stability and your existence are under threat.”

Unlike Corbyn, Gordon Brown wouldn’t talk to Hamas because warmongers in the White House had branded them ‘terrorists’. But that’s their opinion. The state of Israel was founded by terror groups like the one that murdered 91 in an attack on the British mandate government in the King David Hotel and carried out the Deir Yassin massacre. Israel is the expert in terror. As Norman Finkelstein has remarked, “It is more than a rogue state. It is a lunatic state… The whole world is yearning for peace, and Israel is constantly yearning for war.”

The Israeli government itself was described by one of Brown’s own (Jewish) MPs, Sir Gerald Kaufman, as a ‘gang of amoral thugs’.

Brown, the son of a Church of Scotland minister, would have done well (as would all the other critics of Jeremy Corbyn and his ‘funny’ friends) to mull over the words of Gaza’s Catholic priest, Father Manuel Musallam, who told a journalist friend Mohammed Omer: “Palestinian Christians are not a religious community set apart in some corner. We are part of the Palestinian people. Our relationship with Hamas is as people of one nation. Hamas doesn’t fight religious groups. Its fight is against the Israeli occupation.”

When asked about Western media reports that Islamic oppression was forcing Gaza’s Christians to consider emigrating, Father Manuel said that if Christians emigrate it’s because of the Israeli siege, not the Muslims. “We seek a life of freedom — a life different from the life of dogs we are currently forced to live.”

Corbyn isn’t the problem. Zionists are. They are the enemy within. Corbyn’s election to party leader was a surprise brought about by a sudden influx of new supporters weary of sterile and corrupt politics. They had no time to groom him, not that he’s capable of being tamed like previous leaders. Corbyn has a long record of support for the Palestinians and other justice causes and that doesn’t sit well with the ’emininence grise’ pulling the strings. As a loose cannon in a carefully controlled political battlefield he had to be disabled. One way to do that was to pick off his allies one by one and, with the help of a compliant media, derail his party’s election prospects. That is what they’ve been doing with considerable success by weaponising so-called anti-Semitism against Labour’s naive and easily scared troops.

But why take allegations of anti-Semitism seriously from bully-boys who themselves practise or support racism? There’s a simple two-word response to such hypocrites. Admittedly there are within Labour’s ranks too many who say idiotic things about Jews to the detriment of the campaign for justice in the Holy Land. I’ve heard remarks that are so stupidly provocative that one suspects the people responsible are Zionist plants. What is the point of bringing up Hitler and the Holocaust when there are more Israeli war crimes and crimes against humanity than you can shake a stick at?

Corbyn should have acted swiftly on genuine complaints and rejected the trumped up ones. He didn’t. Outside interference should never have been tolerated. It has been and still is. The best way to deal with professional moaners like the Board of Deputies of British Jews is to politely give them the BDS treatment – ignore and refuse to engage until they change their intimidating tone. And tell them this is the British Labour Party not a flagpole of the Knesset.

Furthermore it is long past time to question Labour’s Friends of Israel about their shameless support for the criminal state and its racist leaders and the land-grabbing Zionist Project. There is no place in a socialist organisation, or in British public life at all, for people who cannot bring themselves to condemn a regime that behaves so viciously towards its neighbours, defies international law, thinks it’s exempt from the norms of decent behaviour and shows no remorse. What does aligning with apartheid Israel really say about them? And, by the way, who gave permission to use the party as a platform to promote the interests of a foreign military power?

If people holding public office put themselves in a position where they are influenced by a foreign power, they flagrantly breach the Principles of Public Life. There are far too many Labour and Conservative MPs and MEPs who fall into that category.

Strange how the upsurge in carefully orchestrated allegations of anti-Semitism coincided with the arrival of Mark Regev, former chief of Israel’s propaganda machine, spokesman for Israel’s extremist prime minister and a shameless liar, as Israel’s new ambassador in London.

Corbyn’s other option is to leave Labour, take his supporters with him and let the party stew in its own juice. Let’s face it, the party as it stood then and stands today is dysfunctional, a thing of the past and quite unsuited to the 21st century. There may still be time to build a new, clean, fit-for-purpose political party and get it established before the next general election. In it, though probably not leading it, Corbyn could at least be true to himself.

The Labour Party has repeatedly promised to review its rules to send a clear message of zero-tolerance on anti-Semitism, assuming it knows what that means and who the genuine Semites are. For balance, of course, it should match this with zero-tolerance of those who use the party as a platform for promoting the criminal Israeli regime and its obscene territorial ambitions.

And remember, in 1949 the UN took Israel to its bosom on condition that it accepted the Right of Return of the Palestinian refugees and complied with General Assembly Resolution 194. Noting the declaration by the new State of Israel that it “unreservedly accepts the obligations of the United Nations Charter and undertakes to honour them from the day when it becomes a Member”, the General Assembly admitted Israel as “a peace-loving State which accepts the obligations contained in the Charter and is able and willing to carry out those obligations”.

Has Israel ever honoured its membership obligations or acted as a peace-loving State?