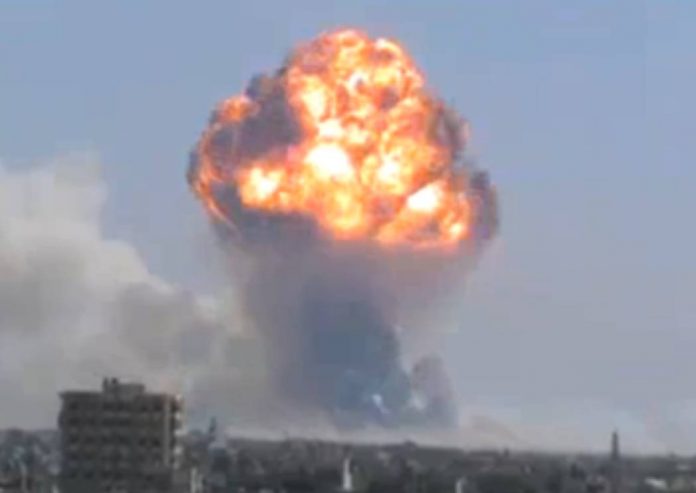 Editor’s note: Our sources have the real quote, “nuke em,’ I want to turn Damascus into a parking lot,” Trump to Secretary of Defense Mattis during April 2017 phone call.  Trump had just read Facebook posts, made by al Qaeda,  that claimed Syria had used chlorine gas in Idlib province.  Trump NEVER checks where his online information comes from, he thinks it’s all true.  “Unhinged” is an understatement.

A new book by Washington Post journalist Bob Woodward claiming to offer insight into a tumultuous Trump White House revealed the tense atmosphere during the lead-up to the US missile strikes against Syria in April 2017.

According to Woodward, following the alleged chemical attack at Khan Shaykhun on April 4, 2017, which Syrian and Russian officials slammed as a false flag attack aimed at discrediting the Syrian government, President Trump was so furious that he wanted to assassinate Syrian President Bashar Assad.

In a telephone call with Secretary of Defense James Mattis, Trump allegedly said the following, according to Woodward: “Let’s f***ing kill him! Let’s go in. Let’s kill the f***ing lot of them.”

Telling the president that he would deal with it, Mattis hung up the phone and instead allegedly told an aide: “We’re not going to do any of that. We’re going to be much more measured.”

Three days later, following internal consultations, but before the alleged chemical attack could be properly investigated, the United States launched 59 Tomahawk cruise missiles from destroyers in the Mediterranean Sea at the Shayrat air base, in what Washington claimed was a direct response to the Khan Shaykhun “attack.” Russian Foreign Minister Sergei Lavrov called the US aggression a violation of international law, with Iranian Supreme Leader Ayatollah Ali Khamenei describing it as a strategic mistake.

US and UK Need Some Pretext to Attack Syria – Investigative Journo

The US strike, which killed several Syrian troops and civilians, and destroyed several planes, failed to reach its objectives of crippling the Syrian Air Force, with aircraft taking off from the base’s runways just hours after the attack to strike terrorist targets.However, the attack did prompt Moscow to announce that it would take measures to help strengthen Syria’s air defenses.

On April 14, 2018, the United States and its British and French allies carried out new strikes, again over claims that the Syrian government had used chemical weapons, this time in Douma, using over 100 cruise missiles. Immediately following that attack, the Russian military reported that Syrian air defenses had shot down 71 of the 103 cruise missiles fired. Syrian media reported that half a dozen troops, and three civilians, had been injured in the attack.

In a fit of public rage on Twitter ahead of the strikes, Trump called President Assad an “animal,” and threatened a “big price to pay” for the “chemical attack,” which has since been conclusively proven to have been a false flag operation committed by the White Helmets organization.

The White House has yet to comment on the contents of Woodward’s book, or the authenticity of the quotes the journalist has ascribed to the president or General Mattis.