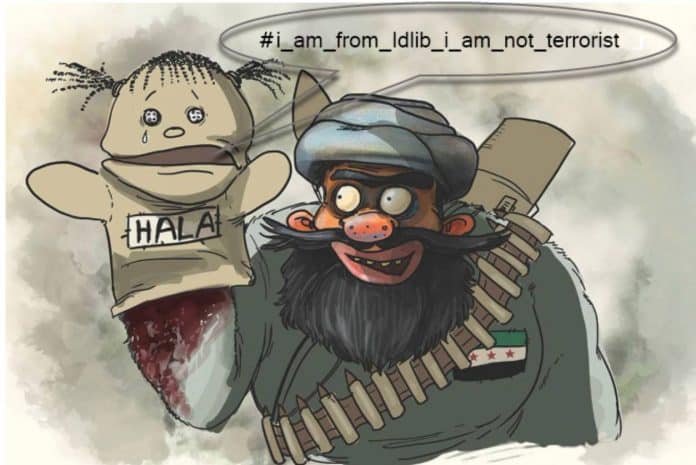 Do you remember Aleppo? A girl appeared once the Government forces started its liberation. A strange fake account in Twitter became available under the name of Bana al-Abed. Given all this, you know that… there’s this girl was a figment of somebody’s imagination. Later Bana proved she had been a reality. But, she left an indelible imprint on the memory of many people in the world.

And then there were Nur and Alaa. Do you know why the world again raised a storm of indignation? All this because of terrorists decided to use children in the information war again. The radicals strived to weaken the siege of Assad’s troops and to run away, to slip as soon as possible if their plan to de-blockade East Ghouta does come true. Well, luckily didn’t do them much good in the end.

What can we see now? Hala? Just imagine the situation when a six years old girl living in Idlib make a re-post of US State Dept Arabic account. Is it possible? Ask your beautiful son or a pretty little daughter if he/she knows what the US State Dept is. I don’t think we could ever describe Hala as ‘neutral’ after that.

Benjamin Norton’s Twitter account claims such Global media giant News Corporations were really among Hala’s followers. He managed to take a screenshot before Russian Zaharova denounces and oppose them.

Benjamin Norton also stated the “Hala in Idlib” propaganda account follows an Israeli journalist who tweets exclusively in Hebrew. So wait, we’re supposed to believe a 6-year-old girl in al-Qaeda-controlled Idlib, Syria also speaks Hebrew (in addition to the broken English her handlers force her to read)?

But as for today we really see the girl is followed by Hugo Goodridge from Al-Monitor, Ubeida Abu al-Bara from Edlib Media Center, Dr. Maiamin Qudah from the University of Jordan, Mu’tasim Billah Al-Shahoud from the Free Syrian Army. Ibrahim al-Saleh, supporter for Ahrar al-Sham and a political advisor for AK party (what is the Justice and Development Party, a national conservative political party in Turkey), Muhannad al-Khatib (@Syria0000) worked with BBC, Sky News Arabic, Voice of America, as well as Al-Jazeera and Dubai, Nabd News Agency, and many others have also been the supporters.  Have your 6-year son’s/daughter’s twitter account so many interesting people from media elites?

We have also observed that there are a lot of twitter-bots following Hala’s account and strange people reposting her tweets whose accounts were created in August and September 2018.

How is this possible? How is it possible to keep buying this terrible propaganda story from month to month, from year to year? Now Hala is taking over Bana’s cause. She does not have a lot of posts yet, but I’m sure there will be more. For some reason, they look like carbon copies of what Bana wrote. Some of her tweets use almost identical expressions and very similar topics. Do not be surprised if this account becomes a central platform if the scenario of provocation, staged attacks, and further strikes are implemented. Apparently, it is being prepared precisely for this. We cannot rule out that Hala’s blog will be the one to share with the world the evidence of a “chemical attack” against civilians by the Syrian government. We see the same victims, the same terrorists and the same methods of propaganda.
Of course, making children suffer is unacceptable. This is the worst thing that can happen. But exploiting children to achieve selfish ends, using them in dirty political maneuvering is even more unacceptable. Instead, the terrorists continue to use children as an effective method to achieve their goals. First, the jihadists used defenseless boys and girls as suicide bombers, then as human shields hiding behind them from air strikes, and now the terrorists use children in the information war to prevent offensive and to run away as soon as possible if their plan will end in failure. Haven’t you wondered who really runs these blogs? Do you not care that you are being used when you quote these accounts?

This propaganda is so disgusting and shameless. The Syrian opposition is again exploiting a little girl for war propaganda. The account literally retweets the US State Department. It was created in July — *just before* the Syrian army battle to retake al-Qaeda-controlled Idlib. Parallel to the war in Syria, have been present constantly a DISHONEST war of mainstream media misinformation and facts misrepresentations.

Unfortunately, the clouds are gathering once again over Syria. The United States with its several thousand-strong military presence in Syria, together with its closest Western allies, threaten Syria with armed aggression. They are not at all embarrassed to follow models they had already used before. The same schemes are used. Inside Syria Media Center stands for #LifeWithoutFakes. We will continue to monitor the case of Hala, Nur and Alaa, Youssef, Bana, and others similar to them closely.
Follow the latest developments by reading ISMC.