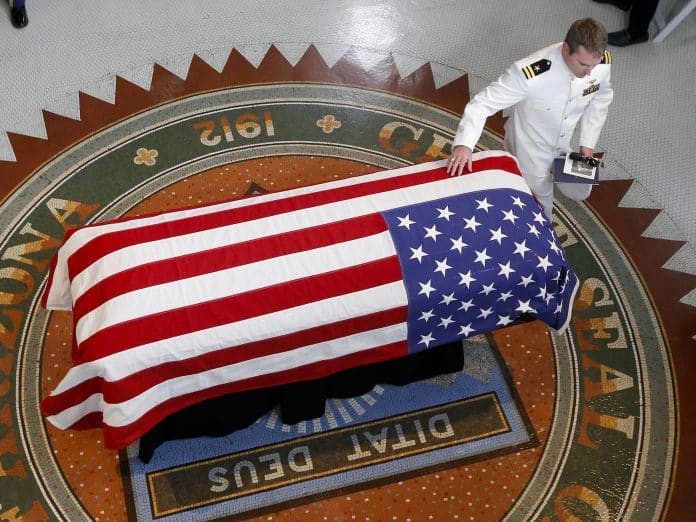 McCain’s funeral was a disgusting exercise in historical revisionism

[ Editor’s Note: The dust has somewhat settled on McCain’s exit. He will now be busy explaining to those in the hereafter why he betrayed them all, including the post-Vietnam MIAs.

But a curve ball in the ceremony was the personal and political issues that were presented solely due to the presenters wanting to take advantage of the huge audience – one which they would most likely never have again.

I do not think my use of the word hijacking is hype. They quacked like a duck, and the Irish journalist rebel Danielle Ryan has a great article on it below.

Megan McCain made her pitiful effort to whitewash the US genocidal war in Vietnam, which is now tattooed on her forehead as the main thing anyone will ever remember about her. Maybe she took a note from the African American preacher who used the Aretha Franklin funeral service to expose a American black community red line issue.

BBC, or Black on Black crime – the epidemic of it, and the continuing destruction it causes in many black communities – has long been a “no go” area for the alleged black civil rights leaders… for many decades now. One could assume this means they are OK with it.

I won’t get into the epidemic of black on white violent crime, and then the biggest red line issue of them all, the historical black on white rape rate – another epidemic swept under the rug. Despite the endless retelling of the bygone lynchings, a dark part of America’s history, mentioning a word about who the contemporary rape kings are is banned.

But the bottom line is a political one. Despite all the civil rights progress in America, with real Africans lined up trying to get in here despite the endless claims of black racism, black civil rights leaders want to keep whitey in the crosshairs for blaming all the maladies in their communities, as that takes them off the hook. American media, of course, has played right along with the con.

Will we see high profile funerals used this way in the future? I believe we will, unless a contract is designed by the families’ lawyers to approve all statements intended to be made before the service. This is what we have become, or maybe what we always were, and will be. We will have to wait and see… Jim W. Dean ] 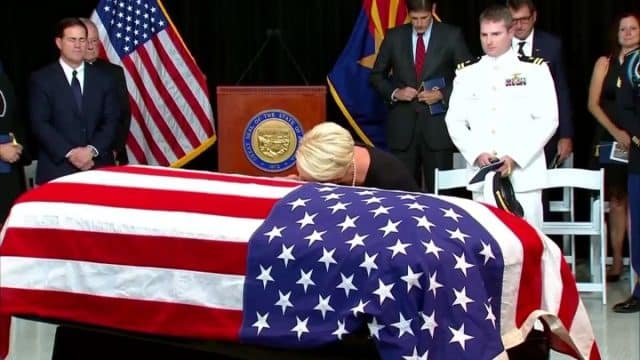 John McCain’s death has inspired a slew of whitewashed obituaries, cringeworthy plaudits and declarations of love from both sides of the political divide — but as historical revisionism goes, his funeral was a step too far.

If there is anyone who owns the right to whitewash John McCain’s legacy, it is his daughter, Meghan McCain. In her hour of grief, we can permit her to rewrite her father’s personal history, to cast him as a hero among men. That much is to be expected — and few would take much issue with it. 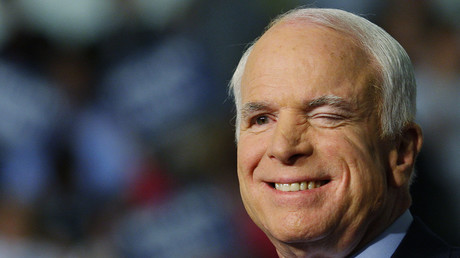 MSM one step away from McCain myth-making – well, you can learn from Lenin classic!

But we cannot permit her to stand in front of the world, on the huge platform that she has been given, to rewrite and whitewash the Vietnam War — and that is exactly what she attempted to do at her father’s funeral.

It gives me no pleasure to be writing something like this about a person who has just died, or to take aim at a grieving daughter — but this is bigger than the McCain family and their hurt feelings. This is about a historical revisionism at its most disgusting and unacceptable.

As Meghan McCain spoke, even the most willing sycophants must have been discreetly raising their eyebrows and shifting uncomfortably in their pews. Standing before a cathedral packed to the rafters with politicians and high ranking military figures, she recast Vietnam, America’s most brutal and barbaric war, as a noble fight “for the life and liberty of other people’s in other lands”.

In her tribute to her father’s service, McCain reminded her audience, with a noticeable hint of venom in her voice that Vietnam was a “most distant and hostile corner of the world” in which to fight. Perhaps, she too shares her father’s well-known distaste for the Vietnamese, about whom he once wrote: “I hate the gooks. I will hate them as long as I live.”

McCain insisted his use of the term was only ever in reference to his captors during his time as a prisoner of war, but the jury is out on that one.

When McCain’s plane was shot down over Vietnam, securing his legacy as an American “war hero,” he was on his way to bomb a civilian light bulb factory — one of 23 bombing missions he flew as part of Operation Rolling Thunder, during which the US dropped 643,000 tons of bombs on the country. 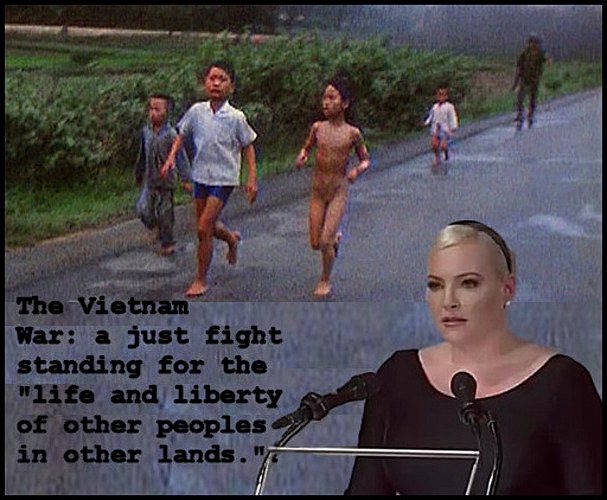 The most horrendous details of the Vietnam War are widely known and don’t need rehashing, but there is a paragraph in a recent New York Magazine piece which captures the war succinctly:

“There are Vietnamese children walking the Earth today who will die by stumbling on the landmines we planted, or unexploded ordnance we left behind. There are as-yet unborn Vietnamese babies who will enter the world with misshapen heads and giant tumors as a result of the defoliants we showered on their country 50 years ago.”

But it is not just those close to the late senator who are attempting to rewrite history. The media, too, is working overtime to convince Americans and the wider world that John McCain leaves behind an untarnished legacy of greatness. 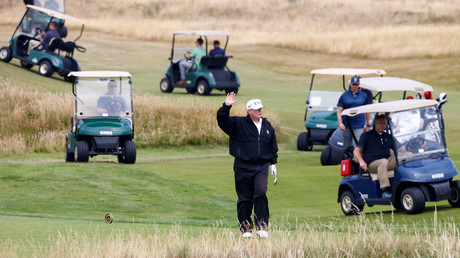 ‘But why would he go?’ Twitter storm over Trump’s golfing during McCain funeral

Particularly disturbing, were the efforts by some to frame McCain’s funeral as some kind of mass rebuke of President Donald Trump. Writing in the New Yorker, journalist (and I use that term loosely) Susan B. Glasser, referred to McCain’s funeral as an anti-Trump “resistance meeting.”

In a meandering dispatch from Washington’s National Cathedral, Glasser wrote that the funeral of “wise man” McCain was “a meeting of the Resistance, under vaulted ceilings and stained-glass windows.” She applauded Meghan McCain’s “remarkable” speech and left the reader with the distinct impression that the Trump era was simply a blip in American history; that things would all be back to normal soon and sanity restored in the White House.

The problem is, to these political groupies that call themselves journalists, Trump is an anomaly, an upsetting aberration — but a room filled to the brim with unconvicted war criminals like Henry Kissinger, George W. Bush and Barack Obama is the ultimate representation of American goodness, because they shake hands across the aisle and speak in nicer tones when they send Americans to fight and die in unjust wars to line the pockets of weapons manufacturers. Suddenly, the likes of Kissinger and Bush have entered the ranks of the anti-Trump “resistance” because they showed up to politely pay their respects to a fellow warmonger. 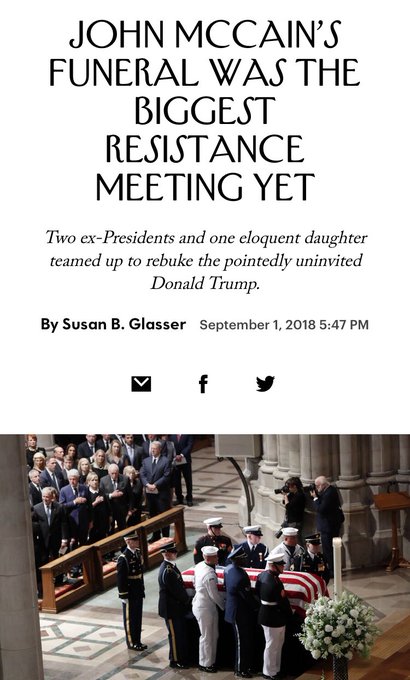 There is something truly disturbing about that mentality, but it is the mentality that prevails in the media class — and as such, it is the mentality that appears to prevail among anti-Trump America.
A tweet about the now fully-rehabilitated George W. Bush passing Michelle Obama a piece of candy during McCain’s funeral was retweeted 93,000 times and covered by CNN, the Huffington Post, USA Today, the Daily Mail and CBS as some kind of heartwarming moment.

The media is apoplectic with rage over what Trump has exposed of America. They plead with us to believe that he is some kind of deviation from the norm, but he is not. He is the United States with the mask removed. Glasser and her ilk are embarrassed; they feel exposed by Trump and are desperate to find someone who will put the mask back on as quickly as possible so normalcy can be restored in DC. Their extreme and creepy levels of sadness over McCain’s death can be understood as some kind of twisted cry for help.

Indeed, journalists have led the charge in arbitrarily imposing an unspecified period of public mourning for McCain, berating as ‘insensitive’ or ‘heartless’ anyone who has had the audacity to bring up the many unpalatable aspects of his life and legacy.

One wonders will they insist upon a similar period of respectful social media mourning when Trump dies. They will not — and nor should they. Public figures whose decisions affect the lives of millions of people — often in the most unimaginably awful ways — are not entitled to have us tip-toe around their legacy, even (and especially) in the immediate aftermath of their death.

Still, instead of doing their jobs, so-called journalists mourned alongside McCain’s family, insisting that this was not the ‘right time’ to make criticisms. But there is no ‘wrong’ time to stand against the war mongering and barbarism of which John McCain was a chief proponent.