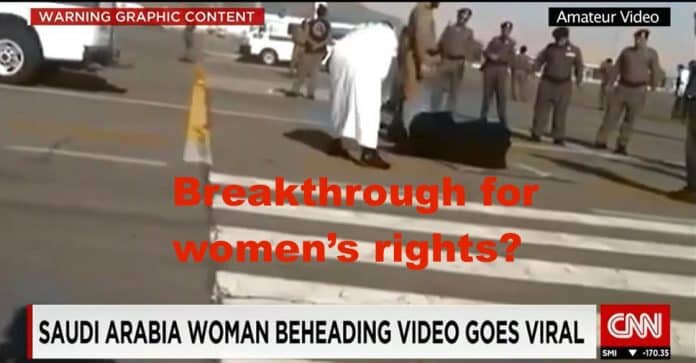 In a major breakthrough for women’s rights in the desert kingdom, Clown Prince Bin Salman (BS) has issued an edict proclaiming that henceforth women will have full and equal rights to be beheaded.

“There is no place in a modern, air-conditioned country like ours for archaic relics of the medieval past,” BS announced at a press conference beside the gallows in Chop-Chop Square in downtown Riyadh. “For too long we have discriminated against peaceful female dissidents. Are not their heads worth every bit as much as those of their male counterparts? Beginning today, a woman who speaks out against me will have exactly the same right as a man to have her head severed from her body by a tremendous blow to the neck with a gigantic, lovingly sharpened sword.”

Bin Salman emphasized that in the interests of full and complete equality, he was ordering that female heads be displayed for three days after execution just like male ones, and that henceforth the severed heads of women will not be covered by a niqab: “Forcing women to cover their heads after they have been severed at the neck is an affront to women’s freedom. We don’t ask beheaded male dissidents to hide their faces when we display their bloody severed heads for three days after execution, so why should we force women to undergo this inconvenience?”

In a related move toward gender equality, Bin Salman ordered the Saudi military to ensure that at least 50% of the cluster bomb munitions being dropped on Yemeni civilians land on women. “Though we have been making every effort to blow the heads off Yemeni women and children as well as men, some reports claim that there is still a ‘gender gap’ with respect to our bomb beheadings,” BS explained. “Today’s orders ensure that we are moving toward full gender equality, as befits a modern and forward-looking nation governed by a bunch of Bedouin Beverly Hillbillies.”

BS’s decision to extend beheading and crucifixion rights to women was applauded by international feminist groups, who have long pressured the Saudi regime to move toward full gender equality. But some expressed reservations, saying that the Clown Prince’s decision did not go far enough because it did not extend full beheading and crucifixion rights to the LGBTQ community.