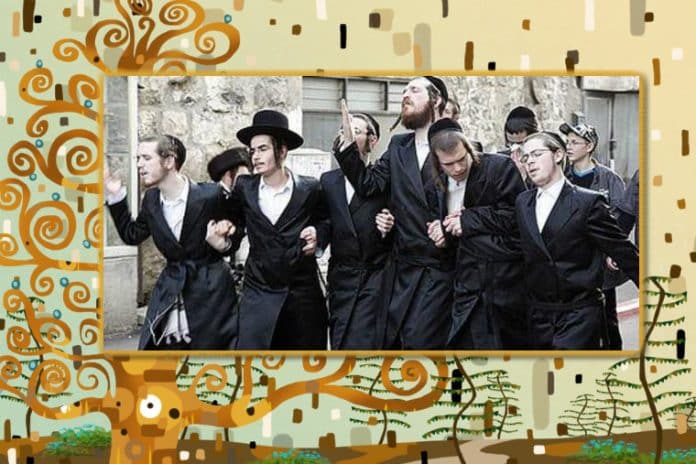 [ Editor’s note: VT has known Israeli geneticist Eran Elhaik since 2013, when we spotted the Jewish genome work he was doing at Johns Hopkins. We noted right away that he was another of the many Jewish academics who does not let ideology and politics influence his scientific research, which is always a breath of fresh air in the geopolitical sewer that VT has to swim in every day.

The work was controversial but solid, and he was able to defend it from the shills that attempted to discredit it.

In short, his work showed that Ashkenazi Jews have about as much “people of the land” DNA as Europeans have Neanderthal DNA. But Europeans have never referred to themselves as ancient Neanderthals or laid claim to Africa as the “ancient homeland” before conditions drove them into exile.

Here is my first article I wrote on his work, New Genome Study Destroys Zionist Claims to Palestine, published in the Press TV Viewpoints commentary section in the heydays when VT writers were constantly in the top five read articles each week, sometimes three out of five.

Eventually Viewpoints was shut down overnight without a word of explanation after a management change, despite the readership that VT had helped promote into the millions.

It was a great partnership for both of us, but we suspected that the usual suspects had infiltrated Press TV to kill Viewpoints. The newsroom manager responsible was fired soon after in a public sex scandal with a staff member, and we have not seen hide or hair of him since.

Eran Elhaik continues his research work in England now, and continues to publish his Jewish genome work at The Khazar DNA project. We highly recommend it, of course. In a day when everything seems fake, this is plain old-fashioned scientific research, where you follow the evidence to wherever it takes you, without the political or ideological filtering … Jim W. Dean ]

The quest to trace the Jewish Patriarchs has been going on for millennia. According to mythology, the Judaeans descended from three Patriarchs—Abraham, Isaac, and Jacob—who are buried in the Cave of the Patriarchs (Cave of Machpelah) in Hebron along with Adam and Eve and the four Matriarchs—Sara, Rebecca, Leah, and Rachel.

The cave was never excavated, but on top of it is a relatively modern building, which Herod the Great built, likely to honor his Edomite ancestors. From the more scientific efforts in this quest, recent DNA analyses of Ashkenazic Jews revealed that their maternal line is European and that their autosomal DNA has only 3% ancient Levantines ancestry, similar to what Europeans share with Neanderthals. So if the remains in the cave are neither that of the Israelites’ nor modern-day Jews’ Patriarchs, where can we find the Jewish Patriarchs?

During the 6th century, the Gok-Turkic tribe of Ashina were forced to migrate westwards toward the Caucasus. Thanks to their organizational and military skills, the Ashina united the Caucasus tribes and formed the Khazar Khaganate. Offering freedom of worship and taxing trade, the Khaganate quickly rose to power, threatening the Byzantine Empire and Umayyad Caliphate.

As it turned out, uniting dozens of Eurasian tribes was a relatively small matter compared with matters beyond their borders. The Pagan Ashina realized very quickly that being situated on the Silk Roads means potentially high income but also tension with their monotheistic neighbors.

At that time, most of the world’s Jews were in Iran. They were descendants of the refugee elite of the Assyrian and Babylonian exiles, the Jews of Habayeb, but mainly converts. The DNA of Iranian and Iraqi Jews look like the DNA of the local populations.

The tolerance of the Persians encouraged the Jews to adopt Persian names, words, traditions, and religious practices, and climb up the social ladder gaining a monopoly on trade. To maintain their monopoly, they invented secret languages and converted populations along the Black Sea to expand their global network.

Among these converts were the Alans, Greeks, and Slavs who resided along the south shores of the Black Sea. Upon conversion, they translated the Bible into Greek, built synagogues, and continued expanding the Jewish trade network. Their Judaism, however, was an anomaly in the Old World. These Jews enjoyed good relationships with the Romans, had female community leaders, and rejected circumcision.

In these respects, the Jews of Asia Minor were pre-Reform. Living in the mythological land of Noah’s great-grandson and knowing the Biblical legends of their mighty Scythians neighbors, these Jews adopted the name Ashkenaz. The DNA of Ashkenazic Jews can be traced to “Ancient Ashkenaz,” an intersection of trade routes in Eastern Turkey, adjacent to four primordial villages whose name derived from the word “Ashkenaz.”

The Ashkenazic Jews began migrating to central Europe and the Caucasus, where they were disappointed to learn that the political wisdom of the Ashina outshone their financial wisdom. Like their religion, the pre-capitalistic Jewish trade was strange to the Ashina, but they were convinced that Judaism was the solution to their problems.

Indeed, following their Judaization, the Ashina (or Ansa) became legendarily rich and lived in relative peace with their neighbors. The Khazar Jews adopted Slavic practices and began developing Yiddish as a new secret language suitable to Slavic lands.

At that time, Jews acquired the Y chromosomal haplogroups Q1b-L275 (Q-Y2200) and R1a-Z94 that likely originated from the Ashina elite and other core Khazar Clans. The R1a-Z94 haplogroup is found in Jew with the priestly surname “Levi,” perhaps indicating their Shaman origin.

When the Jewish Empire began to collapse, by the 10th century, the Jews migrated to Ukraine and Italy. The global Jewish trade network collapsed, East separated from the West, and the Jews of Iran and Ashkenaz reunited only after a millennium.

Yiddish became the lingua franca of Ashkenazic Jews and absorbed German words while maintaining the Slavic grammar. The global trade moved to the hands of the Italians, Dutch, and English, and the Jews were pushed aside.

When asked to adopt surnames during the 17th and 18th centuries, many chose the surname Kohen, Khahan, Kogan, and their derivatives, which echoed their Khazarian origin and their Khagan ruler.

The Ashina and core Khazar Clans were absorbed by the Ashkenazic Jews. Browsing through the Y haplogroup of prominent Jewish figures like the Gaon of Vilna and the Banker family Oppenheim reveals that these Clans continue to hold positions of spiritual and financial leadership. Interestingly, the Israeli Prime minister noted that he is a descendant of the Gaon of Vilna.

This story could not be told without the use of genetic technology (like STRs, GPS Origins, Ancient GPS, and TPS) that track the past of modern-day people. Though they may not be able to pinpoint a burial site, these tools allow a new appreciation of the Ashina and Khazar Clans from which some of the real Jewish Patriarchs came from.

SOURCEKhazar DNA Project
ATTENTION READERS
Due to the nature of independent content, VT cannot guarantee content validity.
We ask you to Read Our Content Policy so a clear comprehension of VT's independent non-censored media is understood and given its proper place in the world of news, opinion and media.