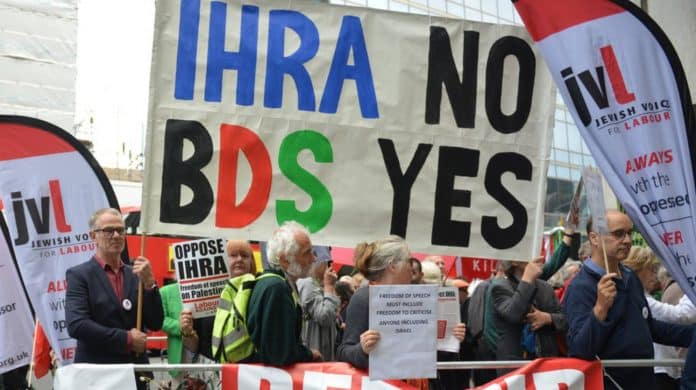 Police are investigating London bus stop posters reading ‘Israel is a racist endeavour,’ believed to be a response to Labour’s decision to adopt the full International Holocaust Remembrance Alliance definition of anti-Semitism.

The large signs have been stuck on at least four bus stops, including Westminster, Waterloo and Bloomsbury. The Metropolitan police posted a tweet saying the posters had been spotted in Lambeth and that officials were investigating reports of fly-posting. They said the “offensive material will be removed.”

It comes after the much-fraught decision by the Labour party to adopt the full International IHRA definition of anti-Semitism. The posters are likely a mockery of one of the definition’s 11 examples, whereby “claiming the existence of a State of Israel is a racist endeavour” equates to anti-Semitism.

A Transport for London (TfL) spokesperson said it “absolutely didn’t authorize” the posters, and that the protest amounts to “fly posting and therefore an act of vandalism.” The posters will be “immediately” removed, TfL added. The posters also appeared on social media after they were shared by the London Palestine Action (LPA) group, although it remains unclear who is directly responsible for the protest.

LPA tweeted the pictures of the bold black and white posters with captions saying Palestinians’ rights have been“denied entirely on ethnicity”.

Labour has been split over whether to adopt the IHRA’s full definition, as those opposing it said it conflated anti-Semitism with anti-Zionism and stifled criticism of Israel’s policies targeting Palestinians.

But following long-running claims of anti-Semitism within its ranks, Labour voted overwhelmingly in favor of adopting the full definition. However it included a “freedom of expression” clause on Israel and the rights of Palestinians.

Before Tuesday’s decision, the party had adopted the IHRA definition minus four examples, including comparing Israeli policies to those of the Nazis.