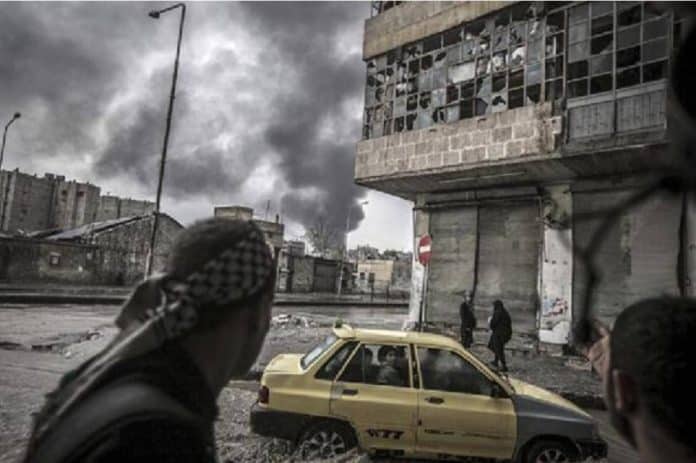 US President tells Syria, Russia and Iran not to “recklessly” attack terrorist forces holed up in Idlib after Assad routs western-backed filth

The Libya chapter in our Book of International Terrorism showed us clearly whose side the West is on, after the FUKUS Axis (France-UK-US) cavorted with terrorist filth on its own list of proscribed groups. The support by the West in Syria for different factions of this scum, linked with al-Qaeda or worse, cements the notion that in their inability to find any other way forward, Washington and its chihuahuas shamelessly back any gang to pursue their policies with a total disregard for ethics or morals. They sold these to the Devil decades ago in the Balkans, in Kosovo, in Iraq.

It is understandable that the only contact Trump, May and Macron have with the reality in places like Libya and Syria is from reports drawn up by civil servants. One only has to watch the excellent British series “Yes, Minister” to see the shenanigans these people get up to, and Whitehall, Washington and the Elysée Palace are crammed full of dusty fuddy-duddies whose dads held synecures in the good old days and drafted little Billy or Willy into diddly-squat jobs inventing schemes and lies and scenarios. Just like their great-grandfathers did in Berlin, drawing lines on maps through territories where they had never set foot, and about which the West was totally ignorant. Once again with a total disregard for the peoples and nations and civilizations and cultures they were destroying at the stroke of a pen.

So let us draw up three chairs, a screen and three buckets for Trump and his sidekicks to puke into as we show them the movie of what is actually happening in Syria, caused by the very forces they back. OK roll the film, three two one, zero… Scene One: a look of utter horror on the face of Sister Margaret, fleeing across the courtyard of one of the Christian convents welcome in Syria, pursued by four demented and bearded demons yelling Allahu Akhbar! Allaaaaaaahu Akhbar! (God is Great). Sister Margaret has no idea of what is about to befall her, she screams for divine intervention from the Virgin Mary, Jesus, God itself and a host of saints. She trips and falls headlong on the little stone wall at the edge of the well-kept garden in the cloister.

As she hits the ground, her habit is torn off her rudely by the leader of the group of demons. The 57-year-old nun who has spent her entire life teaching and helping others was savagely raped, front and back, four times, her vagina torn, her anus bleeding. As she sobbed for mercy her breasts were sliced off and she was slit open from her pubic area to her throat. As her guts spilled out over her hips she was still breathing and praying for the Lord Jesus to forgive them, praying to the Virgin Mary to take care of the children in the school. All the time her assailants stood over her jeering and giggling. Close-up of their faces as something evil lunges behind their eyes. Nice use of taxpayers’ funds there, Theresa!

Scene Two: Seven-year old Ablah (meaning “perfectly formed”) was playing with her favorite toy, a fluffy gray bunny when nine thugs burst into the home, smashing down the front door, running her parents into the bedroom, terrified, and grabbing Ablah by the hair, telling her to sit down, shut up and watch as they tortured her parents to death, because her mother was seen wearing a red jacket. As the parents were disemboweled, Ablah held on tightly to her bunny, rocking back and forth with her eyes shut tight, knowing that something horrific was about to happen. It did. She was raped repeatedly before and after she was decapitated, her head tossed outside. When the nine demented cut-throats had finished with Ablah’s body, they went outside to play football with her head, howling in delight as the eyes popped out of the sockets or when a goal was scored. Nice one, Macron, or were these particular beings supported by London or Washington? Seriously…imagine that was one of yours, Mr. Trump. How do you feel? Comfy sitting in Washington isn’t it, thousands of miles away, oblivious as to exactly what your agencies are doing?

No, no Mrs. May I am sorry but we haven’t finished yet. Yes, I know it is distressing. Can’t take the heat, get out of the kitchen, you started it now understand what you have done. Now let us see what some of the UK-supported filth has been doing.

Scene Three: Aashif, meaning “courageous” was the pride of his parents’ eyes, a lively, happy boy, dutiful and obedient to his parents, always willing to help at home and in his community, a good student, brilliant at sports and with a lovely singing voice. There is something haunting about the defeated look in a child’s eyes when he realizes he is powerless, beaten and about to be killed. No tears, no anger, just a sullen look of helplessness and understanding that a terrifying ordeal is about to take place. Aashif was about to be impaled on a white-hot poker because he was the “wrong religion”. They caught him in the street outside his home, took him to their stronghold, stripped him naked, sodomized him three times, cut off his penis and testicles then rammed the poker up his backside, tearing everything inside him as the stench of excrement and burning flesh permeated the room until he gave up thrashing and screaming as the poker entered his throat.

As the Generals chortle “I say, bad form eh whatty what what? All is fair in love and war, can’t win them all, eh? Sniff! Ah well never mind it will never happen here in Old Blighty, what?” this is the sort of filth that the heroic Syrian Arab Army is confronting and exterminating. We all know that Western assets are involved, Western interests are involved and that Western special forces are holed up in Idlib alongside the darlings they have been financing, training, aiding and abetting.

Scene Four: Excited, a group of leaders of three al-Qaeda-affiliated Jihadist factions receive a message. “It’s come from Baku? Excellent” says one. “Yes three canisters, we have to be quick, Assad is closing in, we have forty-four children we kidnapped two days ago. The plan is we put them in a closed courtyard and wait until the wind is right, then we move in and place the kids in a sports hall as the bastards start vomiting”. A third says, “Yes but we have to get the international agencies involved. Has anyone contacted the White Helmets?” “That British scum!” says a fourth. “Shut up!” says the first, “We’re all in this together. Get the United Nations inspectors and do this shit when they are ready to move in”!

They are surrounded by the Russian, Iranian and Syrian forces and Iranian-backed militia. These are soldiers and although there are acts of cruelty, as a rule soldiers behave like human beings and not the demented banshees I have described above. They do their best to reduce civilian casualties to a minimum. They do not murder children, they exterminate terrorists. As for the Western-backed terrorists and their trainers, the idea is that you get human rights when you behave like a human being.

What is Trump trying to protect? On his behalf, I understand that he and the other leaders whose agencies have been protecting and indeed, supporting these lunatics, have not been fully aware of what they have been doing. But to ask the Syrian Arab Army to go easy on them is utterly ridiculous and only an idiot would say such a thing.

And if there are casualties, regrettably, then let the West not come and incriminate Russia and Iran and Assad. After all, who started this by supporting terrorists overseas to topple democratically backed governments in sovereign states? Hopefully Syria is the last chapter in the horrific book called International Terrorism. Maybe after Assad has won, we can all try a different tack.