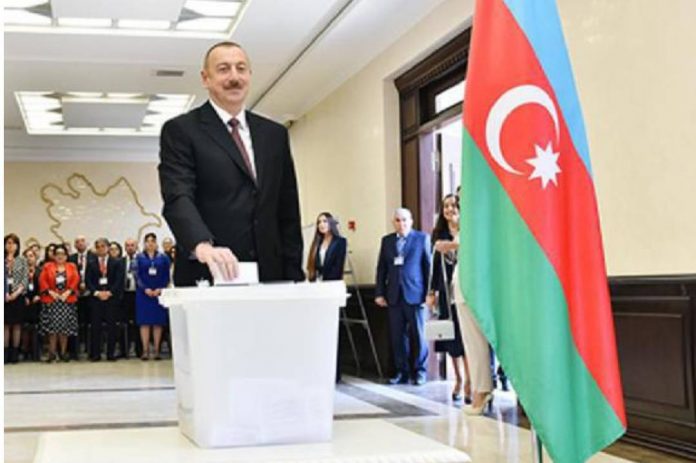 Azerbaijani mass media are discussing the sensation leaked from diplomatic sources: official Baku is going to join the CSTO. It is also alleged that at the summit in Sochi Putin and Aliyev allegedly concluded a secret deal on this subject.

Pravda: The essence of the “secret deal” between the leaders of Russia and Azerbaijan is allegedly the following: Baku joins the Collective Security Treaty Organization (CSTO) as an observer, and in response Moscow uses its influence on Yerevan to return to control of Azerbaijan five out of seven adjacent to Nagorno-Karabakh regions occupied by Armenian troops.

A very important detail: the Ministry of Foreign Affairs of Azerbaijan did not refute media reports on the possibility of Baku joining the CSTO. The spokesman for the foreign ministry, Hikmet Hajiyev, merely refused to comment on this information. As is known, in the diplomatic language “no comment” most often means that these media messages may be true, but “we will not comment on them.”

“At the moment, we have no additional comments on this issue,” Hajiyev said significantly at a briefing in Baku. Further, he openly hinted at the possibility of joining the CSTO, saying that Armenia can not veto Azerbaijan’s membership in this organization. “Armenia is not the only country in the CSTO, there are other members of this organization,” the Azerbaijani diplomat said unequivocally.

Meanwhile, Yerevan does not hide concerns over the possible entry of Baku into the CSTO. The acting spokesman for the Armenian Foreign Ministry, Anna Naghdalyan, said: “The possibility of Azerbaijan joining the CSTO is being discussed at the level of the expert community, but the official position of the Foreign Ministry is this: in this case, Armenia will use the right to veto.”

Even more intrigue in this discussion was the meeting between Vladimir Putin and Azerbaijani leader Ilham Aliyev, held last Saturday, September 1, in Sochi in the Bocharov Ruchei residence. The talks were held face-to-face, and it is not known exactly what the two presidents were saying behind the tightly closed doors.

However, it became known from the statement for the media made by Ilham Aliyev right after the meeting that one of the main topics of discussion was the problem of the Karabakh settlement. The Azerbaijani leader repeated the insistent demand of Baku: Armenia should release seven areas adjacent to Nagorno-Karabakh occupied by Armenian troops.

It is not yet clear whether Vladimir Putin agreed to assist Azerbaijan in returning these areas to Baku’s control. At the same time, it can not be ruled out that during this meeting, Putin and Aliev made a secret oral transaction in a face-to-face fashion: “CSTO in exchange for territories.”

So, soon the publicity can become a sensation: Azerbaijan joins the CSTO as an observer. In response, Armenia, under the pressure of Moscow, does not prevent the return of five of the seven occupied areas under the control of Azerbaijani troops.

So, Azerbaijan is offered observer status at the first stage. The problem, however, is that there is as yet no institution in the Collective Security Treaty Organization such as the “observer country in the organization”. However, it is not difficult to create such a mechanism.

A certain collision is created in another question. The fact is that Azerbaijan, being a member of the international Non-Aligned Movement, like Turkmenistan and Uzbekistan, has declared itself a country with a neutral status. This means refusing entry into military blocs, including NATO, as well as a ban on the deployment on its territory of foreign military bases, including Russian ones.

It is clear that the CSTO is a purely military organization and its entry into it, even as an observer, will to some extent contradict the policy of neutrality in foreign policy announced earlier by Azerbaijan.

On the other hand, a precedent has already been created: Azerbaijan has applied to join another regional structure – the Shanghai Cooperation Organization (SCO), having received the status of “partner country for dialogue” at this stage. And although the SCO, unlike the CSTO, is not a military organization, nevertheless membership in it in some sense contradicts the concept of a neutral foreign policy of the country. In the light of the current aggravation of relations between Moscow and Beijing and Washington, the SCO is becoming a counterweight to the offensive foreign policy of the United States.

In Baku, the views of leading political scientists on the issue of Azerbaijan’s accession to the CSTO were divided. Professor of Western-Caspian University Fikret Sadikhov does not rule out such an opportunity, but on condition that Azerbaijan returns to the occupied territories.

However, another well-known political scientist, MP of the Azerbaijani parliament Rasim Musabekov, completely rejects this possibility, saying that there can be no question of Azerbaijan joining the CSTO.

At the same time, many experts in Baku believe that Moscow, dissatisfied with the policy of the current leader of Armenia Nikolo Pashinyan , deliberately created an intrigue about Azerbaijan’s accession to the CSTO.

Thus, Moscow’s signal to Pashinyan is simple: if Yerevan continues to pursue a policy of rapprochement with NATO and the repression of the old guard inside the country, the Kremlin will toughen its position towards Armenia and, possibly, raise the issue of returning part of the territories adjacent to Azerbaijan to Nagorno-Karabakh.