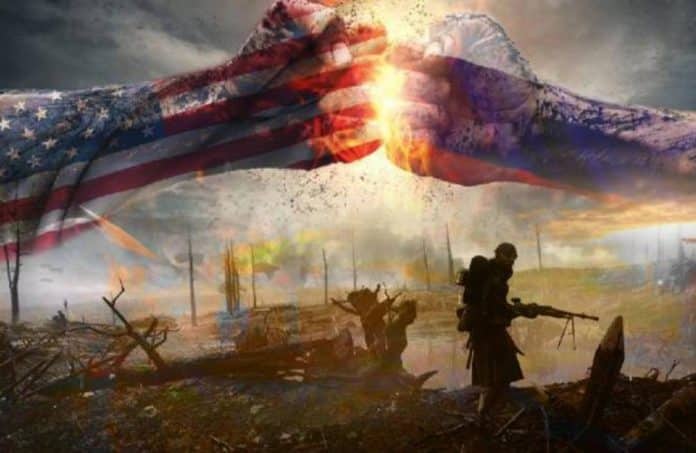 The topic of the war between the US and Russia has become very popular for some profile media, both in our country and in the States. Forecasts about what this war will be, and what will be the consequences, for example, nuclear war – occupy pages of various Russian and American publications.

At the same time, both sides of the alleged conflict demonstrate readiness for the most negative variants of the development of events. For example, NATO recently conducted the “Shot of the Saber” exercise on the Baltic territory, these are the largest exercises of the Alliance in the last few years.

In response, Russia in mid-September is conducting international exercises, “Vostok-2018”, which directly hint at the Soviet still exercises “West-81”, which for a long time were the largest in the USSR, and shocked the military analysts of NATO. Then in the exercises took part about one hundred thousand soldiers and several thousand units of military equipment. By the way, about 300,000 soldiers will take part in the exercise “Vostok-2018”.

As for the notorious “nuclear Armageddon,” it seems that our and American analysts agree on one thing: there will not be any winners in this war at all. That is, the script will be one: “the whole world is in chicken”. Only the terms of the time vary, after how many hours or days after the strikes, the rest of humanity will die out.

Nevertheless, the “virtual battle” and the simulation of the confrontation are continuing. And, we add, it would be better if they were only virtual and stayed. So, for example, a few days ago, the publication National Interest published a scenario of confrontation of the battleship class “Iowa” with the Russian heavy missile cruiser class “Kirov”. Our experts note that the question here was most likely about the cruiser Peter the Great.

Our experts responded promptly to such a simulation. In particular, military expert Alexei Leonkov from the pages of Zvezda magazine said that in case of local collisions, Russia will not use traditional tactics and head-on collisions at all, but will respond asymmetrically.

According to the expert, “in the event of a military conflict, Russia will not act by” traditional “methods, but uses modern anti-ship systems at distant approaches.”

In his material, Leonkov points out that “Russian Caliber missile systems have already shown high efficiency during the Syrian campaign. In addition, anti-submarine modifications of the “Caliber” of sea and air basing are also available. Aviation of the Navy and the Air Force of the Russian Federation is equipped with new cruise missiles X-35E and X-32.

And the adoption of the latest hypersonic air missile complex “Dagger” to improve the effectiveness of joint work of aviation and navy in the fight against shipborne strike groups of a possible enemy. “

In general, the new weapons, which Russian President Vladimir Putin spoke about in his last address to the Federal Assembly, are now a real factor in the country’s national security and defense capability.

By the way, the command of the US Army also considers these new military technologies. At a recent conference on the concept of the national defense strategy, the representatives of the command of US troops in the resolution part of the final report noted that “the navy should be ready to compete in all arenas of global threats against rivals such as Russia and China , which have growing technological capabilities. (excited hypersound, robots and lasers to dazzle the grouping of anti-missile tracking satellites). “

In general, it is clear that simulating sea battle in the media is one point, but the concern of American generals is a story of a somewhat different scale. And it is important here that our developments are troubling the American command and stimulating it to develop and build up its defense potential. This means that we have several years of relative stability in stock.

On the other hand, as the experts note, with the current defense capabilities of our countries, “the best of the worst options” is the one that is happening in Ukraine. When the NATO instructors prepare Ukrainian soldiers for war not only with the ЛНР and the DNR, but also in some abstract perspective with the Russian army. What, again, we hope will not happen. However, one way or another, military analysts for the most part say that in the next few years a “big war” is not to be expected. That at least somehow reassuring.