Initiative
The successive steps of Syrian Arab Army both in Quneitra and As-Suwayda provinces as well as the return of the UN peacekeeper forces to the frontier between Syria and Israeli-occupied Golan Heights gave an impetus to numerous official’s statements on the back of 6,5 mil refugees.

To carry out the idea, some states have already launched their initiatives. The representatives of Russia put forward a plan of the post-war Syrian settlement, urging the whole world, in particular, the U.S. and EU to take part in the process.
Moreover, the specialized centers to register Syrians wishing to return home began opening in Lebanon. Simultaneously the center for the reception, allocation, and accommodation was created in Syria.

The rounds of attacks on refuges
In response, the Western media launched a large-scale information campaign for creating a negative background to hinder the return of Syrians back home. Gradually a series of publications appear where people cautiously declare in favor of repatriation initiative. Also, the horrible stories of returned citizens who face various difficulties can be nominated for Oscar.

It worth noting that this kind of publications started to appear after the mass return of the refuges. Such sort of well-planned attack on refuges in the media made us analyze the latest developments and find out the goals of the planned attack.

The information aggression of the Western media was promoted in three stages. The first one kicked off just after Syria, Jordan, Lebanon, and Russia had started to develop the ideas of repatriation. The agitators highlighted the destroyed houses and buildings, the lack of electricity and water supplies, mass starvation, and repressions among the returned people. At the same time, the statements of the United Nations High Commissioner for Refugees were replicated, where the displaced persons were worried about their premature decision to return home.
In this regard, major online outlets like the Wall Street Journal, al-Jazeera and DW prepared and carried out the first information strike. The materials of the resources were repeatedly quoted the small one, intensifying a wave of negativity directed against the Syrians’ striving for peace.

The second information strike was focused on the suppression of the long-awaited news about the return of UN peacekeepers to the frontier between Syria and Israel. This campaign was run by the New York Times, the Economist, BBC, and the Middle East Eye. Most likely, the Western states believed that this turn of events could accelerate the return of refugees as the peace is gradually being established even in the historical areas of Syria.
The Western outlets tried to influence this situation with the second wave of disinformation. The issue of the refugees’ insecure situation was instantly caught by smaller opposition media like Syria Accountability, News Deeply, Los Angeles Times, and Syria Direct. The main theses were: control by the Syrian special services, mass recruitment of young people to the army, lack of political guarantees of persecution, housing problems and food shortages.

The organizers of the information attack didn’t stop at that. The third wave of threat appeared, when the Syrian government started to prepare the large-scale Idlib offensive. Apparently, after the full liberation of the province, thousands of people will return home.
Voice of America, the Hill, and Gulf News has become the initiators of the third stage, who deliberately suppressed the ardent aspirations of Syrians to return home. No wonder that the unsubstantiated position of the media giants on the premature return, repressions, and insecurity were duplicated around the world by inexperienced journalists.

It is worth noting that Inside Syria Media Center would not blame the Western media for inconsistency if it had not analyzed the critical reasons based on the refugees’ fears. We also found out the fate of civilians who have already returned.
Let’s highlight several pretexts for harassment of Syrians, striving to return.
The first pretext is the settlement of Syrian citizen status, and repressions related to persons supporting the opposition. The Syrian government intends to resolve this matter by seeking an individual solution. The Syrian Foreign Ministry claims that even persons, who have fought in the ranks of terrorists, would be amnestied if they had not committed murders or took part in terrorist attacks. Bashar Assad meeting with the locals

To confirm these statements, the Syrian leader and ministers hold meetings on the ground, work with the people, and dealing with their problems. The last meeting took place in As-Suwayda. During his visit, Bashar Assad promised to prolong the amnesty. So, the Syrians who left the country due to the fear of retaliation for supporting opposition should not worry at all.

Below is the comment of a 42-year-old doctor from Aleppo Anwar Al-Boudonie, who commented on the situation to our Media Center. “I fled Aleppo with my family when its fate was sealed. I was afraid of repressions. Nour al-Din al-Zinki clouded my judgment. They told me that Assad is a terrorist, killing his own nation.”
“At first I sympathized with the opposition. I even provided them with medical assistance. I fought on their side. They lied to me, and I realized it when I got rid of their influence and crossed the border. I left them voluntarily, realizing my mistake. But I was afraid to return home and feared persecution.”

Anwar told us that the problematic situation in the refugee camp forced him to risk coming back. He was quite shocked to find his house nearly untouched and then was employed in a nearby hospital. He thanks Allah that the Syrian government doesn’t persecute him, and provided his family with the shelter, work, and food. “The Syrian authorities give a second chance for those who want to promote its people’s well-being and participate in the restoration of the homeland. Without forgiveness we will not become united,” Anwar added.
The poor organization of the return process is yet another overstatement replicated by the media. By the way, a plan for the coordinated return of refugees to Syria was drawn up to minimize the pressure on them. The Syrian government set up a committee to coordinate repatriating millions of its nationals, as well as Center for Reception, Allocation, and Accommodation of Refugees. Furthermore, the Lebanese side established centers for the registration of Syrians, located not far from the refugee camps.

Besides, a handbook on repatriation and an online database to facilitate the return of the refugees were drawn up. The recommendations for the Syrian President Assad have been worked out on the creation of a particular refugee Ministry in Damascus. Then the Syrian Foreign Ministry formulated a check-list that was spread among all the Syrian embassies around the world.

Also, the Syrian authorities facilitated the procedure for entering the country. The citizens of Syria need to provide any document to confirm their identity. There will be no fees.
The alleged Syrian government lack of funds for refugees’ accommodation is one more fictional pretext raised by the Western media. Meanwhile, more than 40 settlements have been set up and equipped with everything that is necessary as at 1 September 2018, reports Center for Reception, Allocation and Accommodation of Refugees. 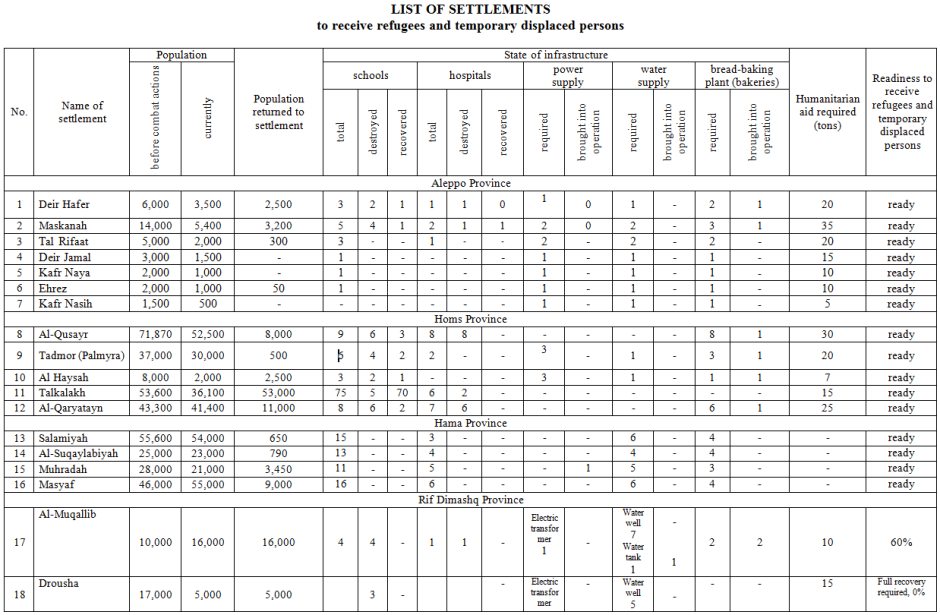 A lot of news outlets report the returned refugees to suffer from lack of water and food supply and have no place to live. The Government, as well as province authorities, are blamed for paying little attention to restoring infrastructure. Also one of the issues that are arousing grave concern in the international community is the question of the reconstruction of damaged and destroyed houses.

The Western media had no advantage in speaking of subsidies and guarantees provided by the Government that aims at restoring peace (social assistance measures, helping refugees to find employment, building their own home, etc.).

The Syrian authorities create rehabilitation centers to provide psychological assistance for the citizens. Psychologists help their fellow countrymen who find themselves in difficult situations or have been subjected to violence. Such centers are opened throughout the country under the patronage of Asma al-Assad, the wife of the President. They strive, in particular, to provide various types of social, legal, psychological, medical, educational and professional care for women and children. Children and women, more than any other social group, are in need of these assistances. The main task is to develop and form the personalities, restore the health and ensure the social rehabilitation.

Real situation in Syria through the eyes of returned

To demonstrate the current situation in Syria through the eyes of the returned persons, Inside Syria Media Center won’t tell you about the efforts of the Syrian Government on restoring infrastructure in Syrian provinces. We will just publish the actual information about the hard work of Syrians. We hope that these photos, in fact, will prove the lie of the Western media.

The restoration of schools in Aleppo, Daraa, and Quneitra

The rebuilding electricity infrastructure in Douma and Nabaa al-Sakhar 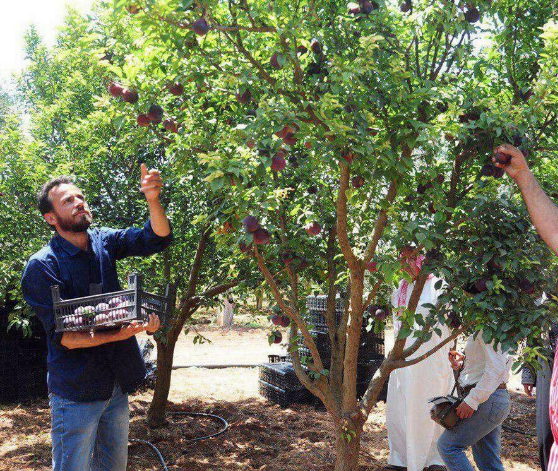 New stores opening and the Sale of national goods

Return of Syrians to their homes 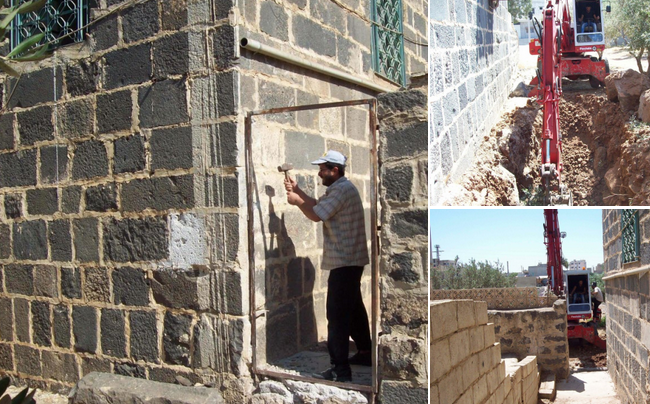 The rebuilding of the destroyed Mosque

Asphalting the road in Yabroud Once again we have seen the lying Western media campaign that is far from the truth. Information that is cited as evidence does not withstand any criticism. The Syrians are happy to return, and the state is making every effort to support its citizens.

Many thanks to @SyrianLionesss for the photos highlighting the reconstruction/rehabilitation efforts and return of citizens all around Syria.