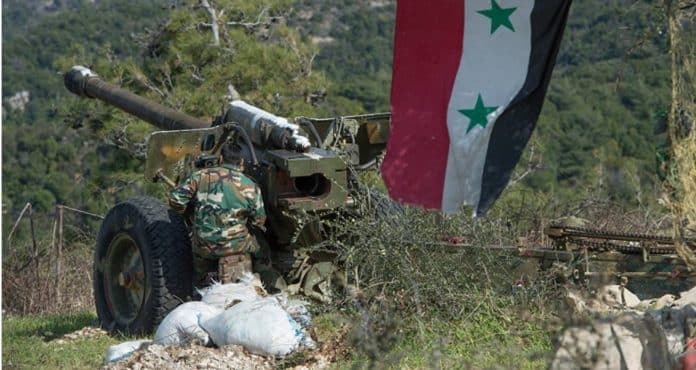 On September 3, 2018, in a “Tweet,” Donald Trump warned Russia, Syria and Iran that any attempt to kill the monster of Idlib would be resisted in some manner by the US. The monster, you see, is Donald Trump’s pet and Idlib, a region in Northwest Syria, is where he keeps it. It feeds on local children and roams the countryside at will.

Its friends are corporate news media, we know that for certain. You see, there has never been a photo of the monster published anywhere. Nearly 3 million people live, or at least used to, where the monster roams. Some ran away, others may have been eaten, but anyone who tries to find out gets caught, sometimes beheaded, sometimes put in prison or they simply disappear.

From here on, the reader is faced with a strange and sinister tale of a people living in fear. They have no rights, no dreams, no life at all, no purpose but one, to feed the monster.

Of course, the reader might well wonder why geopolitics are being “sorted out” with parable and allegory. Why use the term monster?

If the corporate media is to be believed, please don’t laugh, the people living in Idlib are under the watchful eye of “freedom fighters.” No one is kidnapping their children, no one is taking their homes, their food, their lives, no one is using them for human shield or slave labor.

We know this because the corporate media, the “fake news” as Trump calls it, tells us so. So, does Trump, in a way, as he wants the “monster,” as we have chosen to call it, to continue unchecked, unwatched, trusting the lives of 3 million people to its predations.

I consider that at best “unwise,” perhaps a bit more than that.

Let’s look at who rules Idlib. Idlib and adjacent occupied regions within the Aleppo Governorate are and have been part of Syria for 3000 years. Much of the bible is played out here. In fact, the oldest Hebrew Bible, the Aleppo Codex, dating from 930 C.E., originated there. Partially destroyed in 1947, the Codex was smuggled to Palestine in 1957 and is now housed at the Shrine of the Book in the Israel Museum.

Idlib ties to Aleppo and Aleppo and Damascus are Syria and have been since the beginnings of recorded history. That said, then we take a closer look at the issue at conflict.

Alamo or Fall of Hitler’s Berlin?

Idlib, with the exception of US head areas where terrorists seem free to operate, is the last holdout in the “Syrian Civil War.”

Here is what recent history has taught us, there are no real civil wars, only “color revolutions” and “regime change.” Nothing new here, replacing unprofitable governments, those who fail to buckle under, is commonplace. Think of Iran in 1953 for instance, where the CIA organized riots, bombings and assassinations to put a vicious tyrant, Iran’s Shah, on a throne.

Salon lists 35 nations where the US has pushed forward puppet fascist regimes, alphabetically:

I have my own list, I would add to this:

Consider both lists as “partial.”

What I am saying is this, and it can’t be said enough, “there are no civil wars.” The US went into Syria as a move against Russia, the same reason the US goes after Iran, reliving the sickness of the Cold War, a century old fake struggle between factions of the deep state, conflict that exists for the sake of fake conflict.

In Syria, the methodology was simple, the CIA went in with millions in cash and bought every traitor they could find, playing on sectarian divides and human weakness. They used the lessons from 1991 and Iraq when the CIA bought a dozen or more of Saddam’s generals, then “rebought” them for the infamous Bush “mission accomplished.”

There is never a consideration for the end result, think of Ukraine and its fascist regime or Libya? Need we mention Afghanistan or Iraq?

Syria, however, is another one for the “loss” column, with Vietnam. At least a generation of America’s best were killed off. Instead, a generation of Syrians has died, killed at the hands of US, Saudi, Israeli backed mercenaries.

What happened with those mercenaries, those colonels and generals the CIA bought to overthrow Assad? Today most are headless, decapitated by ISIS along with the Sunni ruling families in Iraq that joined with ISIS in January 2014, handing Mosul and Anbar Province over to ISIS.

Do remember, both nations were supposed to fall, bringing about the plan that Wolfowitz, Kagan, Pearle, Kristol and their partners in Israel, penned decades ago.

Today, Donald Trump sits in the White House, staving off impeachment and arrest while his henchmen, Dunford, Bolton, Pompeo and Mattis wage a war of military and economic blackmail against two dozen nations.

All the while, America’s mounting national debt is accelerating at an unimagined pace, wages and standard of living in America plunges and the nation itself moves closer and closer to what may be a very real civil war.

The Monster of Idlib

The battle lines are drawn. Russia, Iran, Syria and Hezbollah, along with thousands of former Jihadists, entire units of the former “Free Syrian Army,” align to retake Idlib and restore civil government.

Aligned against them is the United States and its missiles. Waiting in the wings, Turkey and its occupation force, which includes up to 2000 reservists “out of uniform” now pretending to be the long since evaporated “Free Syrian Army.”

In real control is al Qaeda. From IRIN News:

“While Turkey controls the rebels in nearby Afrin and al-Bab, the landscape in Idlib is more complex. Two major factions dominate – the National Liberation Front and Tahrir al-Sham – and they differ on their positioning towards Ankara.

Turkey’s favourite is the NLF, which is led by Fadlallah al-Hajji, a Muslim Brotherhood ally. The NLF includes Turkey-friendly Islamists like Ahrar al-Sham, the Noureddine al-Zengi Brigades, Failaq al-Sham, Jaish al-Ahrar, and groups that fought under the Free Syrian Army banner, like the Victory Army and the 2nd Coastal Division.

Big but brittle, the NLF is held together by Turkish sponsorship and shared enemies: al-Assad’s government, Syrian Kurdish groups, and hardline jihadists.

The NLF’s main rival in Idlib is Tahrir al-Sham, a jihadist group that controls the provincial capital, the Bab al-Hawa border crossing with Turkey, and other key areas in Idlib.

Led by Abu Mohammed al-Golani, Tahrir al-Sham grew out of what used to be the Nusra Front, Syria’s official al-Qaeda franchise. It is classified as a terrorist group by the UN as well as by the United States, Turkey, and many other nations. Moscow and Damascus typically point to the group’s presence when launching new military offensives.

Tahrir al-Sham has a murky relationship with Turkey. Al-Golani appears to engage pragmatically with Turkish intelligence but refuses to fully submit to Ankara’s diktat.

To his dismay, Turkey keeps pushing for control over the entire Idlib insurgency. Turkish officers tell rebels the only way to appease Russia and keep al-Assad out of Idlib is for Tahrir al-Sham to dissolve and let its members join the NLF.

Some Tahrir al-Sham members seem to agree. Syrian analysts, including Ahmed Aba-Zeid, a well-connected Syrian researcher who supports the non-jihadist opposition, told IRIN that Turkey now dominates one wing of the group.

Al-Golani is also under pressure from jihadist hardliners who portray him as a Turkish tool and a sellout.

“Al-Qaeda leaders in Syria tend to see Tahrir al-Sham, and Abu Mohammed al-Golani in particular, as unprincipled and treacherous,” Cole Bunzel, a research fellow in Islamic Law and Civilisation at Yale University, told IRIN. Bunzel said hardliners view Tahrir al-Sham as “having disobeyed the al-Qaeda emir [leader] in breaking off from the organisation, and since then persecuting al-Qaeda members in Syria.”

Some of al-Golani’s jihadist critics, many of whom are Jordanians and Palestinians, have gathered in a pro-al-Qaeda splinter faction known as Hurras al-Deen. The group is small, but its religious criticism stings and adds to al-Golani’s challenges. He must now simultaneously fend off further defections to Hurras al-Deen and prevent his other flank from being peeled off by Turkey, whose “good cop” attitude is backed up by the threat of a regime offensive.

A Tahrir al-Sham official again rejected calls for the group’s dissolution on 28 August, but added that it seeks “a salutary solution in the liberated north that spares our people the expected aggression.” Behind the scenes, the group appears to be negotiating with Turkey, while Turkey negotiates with Russia.

In Aba-Zeid’s view, how Tahrir al-Sham evolves in the future will depend on Ankara and Moscow.”

What we aren’t seeing here is accountability. Who speaks for the 3 million in Idlib? Their elected government is in Damascus, but no one in Idlib was allowed to vote. In fact, there is no freedom to speak or assemble there whatsoever, only staged White Helmet gas attacks and mob rule by a series of factions receiving vast military support from the United States despite the fact that the US considers them terrorists.

In fact, the organization receiving the most American support is the primary target of America’s counter-terrorism efforts, al Qaeda.

Where did al Qaeda learn to govern? Why do Trump and his henchmen recognize them as a ruling body? Isn’t there something in American lore about “consent of the governed?” Isn’t this one of the Jeffersonian concepts on which America is based?

Then again, is it fair to consider rule by mercenaries and terrorists a monstrosity? We think so.

Gordon Duff is a Marine combat veteran of the Vietnam War that has worked on veterans and POW issues for decades and consulted with governments challenged by security issues. He’s a senior editor and chairman of the board of  Veterans Today, especially for the online magazine “New Eastern Outlook.”
https://journal-neo.org/2018/09/09/the-monster-of-idlib/