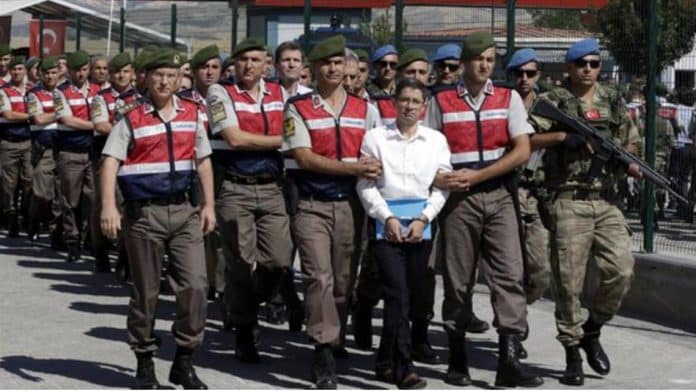 A court in Turkey has handed down jail terms to more than 100 people, including former air force officers, on suspicion of affiliation to a movement led by US-based opposition cleric Fethullah Gulen, whom the Ankara government accuses of having masterminded the July 2016 coup attempt against President Recep Tayyip Erdogan.

A judicial source, speaking on condition of anonymity, said on Monday that Ankara Heavy Penal Court sentenced 35 suspects to eight years and 9 months in jail, while the remaining 80 suspects received jail terms up to seven years and 6 months.

Meanwhile, the Chief Public Prosecutor’s Office in Istanbul has issued arrest warrants for 102 active serving and former soldiers over their alleged links to Gulen movement.

Security forces have so far managed to arrest 56 of the suspects during separate operations across Istanbul. A total of 89 suspects are accused of communicating with Gulenists.

During the 2016 botched putsch, a faction of the Turkish military declared that it had seized control of the country and the government of Erdogan was no more in charge. The attempt was, however, suppressed a few hours later.

Ankara has since accused Gulen of having orchestrated the coup. The opposition figure is also accused of being behind a long-running campaign to topple the government via infiltrating the country’s institutions, particularly the army, police and the judiciary.

Gulen has denounced the “despicable putsch” and reiterated that he had no role in it.

“Accusations against me related to the coup attempt are baseless and politically-motivated slanders,” he said in a statement.

The 77-year-old cleric has also called on Ankara to end its “witch hunt” of his followers, a move he says is aimed at “weeding out anyone it deems disloyal to President Erdogan and his regime.”

Turkish officials have frequently called on their US counterparts to extradite Gulen, but their demands have not been taken heed of.

Turkey, which remains in a state of emergency since the coup, has been engaged in suppressing the media and opposition groups suspected to have played a role in the failed coup.

Tens of thousands of people have been arrested in Turkey on suspicion of having links to Gulen and the failed coup. More than 110,000 others, including military staff, civil servants and journalists, have been sacked or suspended from work over the same accusations.

The international community and rights groups have been highly critical of the Turkish president over the massive dismissals and the crackdown.