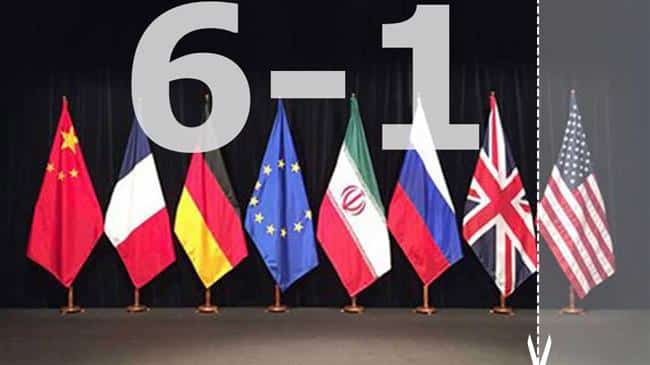 [ Editor’s Note: We are closing in on the November showdown date for the US’ 100% oil sanctions against Iran to go into effect, something not seen since Roosevelt and Churchill agreed to force Japan into war by cutting off its oil and scrap steel imports, the life blood of its industry.

In 1941, they wrongly assumed that Manila would be the first strike target, and were caught flatfooted on the front end of the war after Japan’s much more aggressive first move. But it was off to the races for the US war economy.

We have a different situation with Iran, which has not invaded Manchuria as the Japanese did. In fact they haven’t invaded anywhere, nor is Iran in anyone’s country without permission, which the US has shown it has no problem doing at all.

It simply says “we are pursuing our interests”, a phrase that used to say “national security interests”, but now is just naked economic extortion and domination in an attempt to balance out our huge debt bubble.

Americans are being forced to borrow huge sums so that there is more for the mega-hoodlums to steal. Even the fiscal conservatives have accepted it, seduced by the cost of running for office going higher and higher.

The potential devastation will be a worldwide recession being triggered. Those who have made a killing on the way up will short the financial and commodity markets before the bottom drops out – the classic “nail the patsies coming and going”.

And of course they will blame it on a well-groomed suspect or two. We are going to see some historical brinkmanship going on during the run-up to the election. I am worried about what shape the US will find itself in during 2019 … Jim W. Dean ]

Russia, Iran, Europe and China will intensify work in coming days to counter unilateral US sanctions and Washington’s efforts to undermine a 2015 nuclear deal with Tehran, Sergei Ryabkov says.

The Russian deputy foreign minister also chided European companies, saying they are wrong in refusing to cooperate with Iran in the face of US pressure. Most European firms have ignored a “blocking statute” re-enacted by the EU to protect them against punitive American measures for trading with Iran.

Their withdrawal has undermined Europe’s wish to portray the nuclear deal with Iran as a flagship achievement of their foreign policy and a symbol of their growing strength.

PressTV-Bolton: EU has to choose between Iran and US

US National Security Adviser John Bolton says Europeans have to make the choice between doing business with Iran and the United States.

Last month, President Donald Trump installed a wave of sanctions targeting Iran’s financial, automotive, aviation and metals sectors and threatened that a second wave would “ratchet up to yet another level” in November.

In an interview with the Rossiiskaya Gazeta, Ryabkov said Russia and the European Union have outlined an action plan to resist US sanctions against Iran.

“We have outlined a set of measures to be discussed with the Europeans,” he said. “Plus, our internal efforts are needed to get prepared to the moment when the Americans proceed to the second phase of re-imposing their extra-territorial sanctions against Iran.”

Ryabkov said the working sides must find formulas, means and mechanisms to react to the expected second wave in order to minimize losses from the US sanctions.

They, he said, need to find “elaborate measures to continue economic cooperation in a guaranteed and reliable way so that economic operators could see alternatives to yielding to the American dictation.”

Ryabkov said the plan is to make international companies “see that there are possibilities to continue lawful and unrestricted business in Iran and with Iranian partners.”

“Our collective will and ability to create conditions for unimpeded exports of Iranian oil to external markets would be of major importance,” he said.

The second wave of US sanctions is due to kick in on Nov. 4 and hit Iran’s exports of oil and its derivatives as well as the country’s banking sector.

Trump has pledged to bring Iran’s oil exports to zero, to which Iranian officials have responded that they will try to sell as much oil as they can and protect banking cooperation with foreign countries.

“That the US says it will zero down Iran’s oil sale is baseless, although reduction in the oil sales is possible,” First Vice President Es’haq Jahangiri said in Tehran on Monday.

China’s imports of Iranian oil spike to record 874,000 barrels per day, ahead of US plans to sanction Iran’s energy sector.

Oil prices near $80 amid uncertainty

Oil prices have been on a roller-coaster ride since Trump’s announcement in May to squeeze Iran’s exports. On Wednesday, prices rose as looming sanctions against Iran raised expectations of tightening supply and top producer Russia warned of a fragile global crude market.

Russian Energy Minister Alexander Novak said global oil markets are “fragile” due to geopolitical risk and supply disruptions and warned of the impact of US sanctions against Iran.

“This is huge uncertainty on the market – how the countries, which buy almost 2 million barrels per day of Iranian oil will act. The situation should be closely watched, the right decisions should be taken,” he said.

Novak touched on outages and falling production in Mexico and Venezuela, saying the fragile situation is related to the fact that not all the countries have managed to restore their market and production.

Prominent hedge funds have warned that upcoming US sanctions on Iran’s energy sector could push oil prices above $150 a barrel from around $75 now.

“The higher price will only be blamed on the Trump administration. There’s not much anybody can do if the sanctions come in and are enforced properly,” he told CNBC.

According to the Energy Information Administration, Iran produced 4.7 million barrels per day in 2017 and is the world’s 6th largest oil producer.

Rallying prices have improved Iran’s oil revenues before the sanctions. Official figures released by the Central Bank of Iran (CBI) on Tuesday showed the earnings rose to $9.9 billion between March and July, up 60 percent year-on-year.