VT sources say Kavanaugh has a long history of gambling addiction and has used his position as a judge to sell judicial decisions on behalf of “interested parties” that bought Kavanaugh’s gambling debts, including lobbyists and known crime figures.

Trump, as part of his ongoing war with the FBI, never referred Kavanaugh to a proper vetting process and now faces being blindsided.

Tens of thousands of documents on Kavanaugh have been withheld, some released only hours, even minutes, before the hearings, in hopes that evidence showing Kavanagh sold decisions and took bribes, won’t be discovered until he is already confirmed.

Welcome to how the world really works.

Washington (CNN)  – Senate Democrats have referred information concerning the nomination of Brett Kavanaugh to the FBI, they said Thursday, and called for the Judiciary Committee to delay a vote.

“I have received information from an individual concerning the nomination of Brett Kavanaugh to the Supreme Court,” Sen. Dianne Feinstein, D-California, said in a statement.
–
“That individual strongly requested confidentiality, declined to come forward or press the matter further, and I have honored that decision,” she said.
“I have, however, referred the matter to federal investigative authorities,” she added. 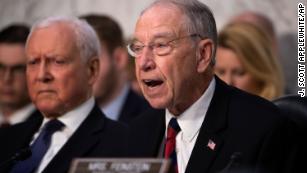 Committee vote delayed for Supreme Court nominee Brett Kavanaugh to next week
Illinois Sen. Dick Durbin said the referral went to the FBI but also did not say what the information contained.
–
“No idea what they are going to find,” Durbin told CNN. “I think the FBI is the appropriate agency and that’s where it was referred.”
–
Durbin also said he does not believe the committee should vote on Kavanaugh “until all the information is before the committee.“
–
A Democratic source says California Rep. Anna Eshoo referred a concern about Kavanaugh from one of her constituents to Feinstein. Feinstein and other Democratic senators discussed the issue Wednesday evening, according to two sources familiar with the meeting. No Democratic senator other than Feinstein has seen the letter.
–
In a statement, White House spokesperson Kerri Kupec said Kavanaugh has been “thoroughly and repeatedly vetted” by the FBI for government positions over the past 25 years and accused Democrats of trying to delay the nomination.
–
“Throughout his confirmation process, Judge Kavanaugh has had 65 meetings with senators — including with Sen. Feinstein — sat through over 30 hours of testimony, addressed over 2,000 questions in a public setting and additional questions in a confidential session. Not until the eve of his confirmation has Sen. Feinstein or anyone raised the specter of new ‘information’ about him,” Kupec said.
–
https://www.cnn.com/2018/09/13/politics/kavanaugh-feinstein-letter-fbi/index.html
ATTENTION READERS
Due to the nature of independent content, VT cannot guarantee content validity.
We ask you to Read Our Content Policy so a clear comprehension of VT's independent non-censored media is understood and given its proper place in the world of news, opinion and media.