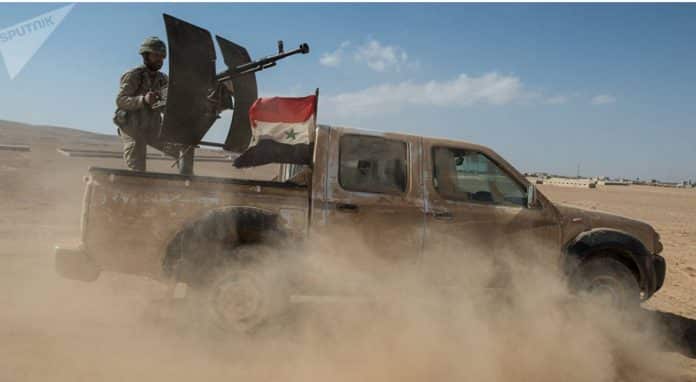 The development comes nearly two weeks after a spokesperson for the US-led coalition’s Operation Inherent Resolve against Daesh told Sputnik that there was no terrorist camp near its military base in Syria’s al-Tanf.

The Syrian army has launched a surprise offensive against Daesh* terrorists north of al-Tanf in Homs province. Government forces struck militant positions in the settlements of Kobajjep and al-Rashwaniyah, control of which opens the way to the strategically important area of Humeimah, which lies on the border with Deir ez-Zor province.

A military source told Sputnik that “the Syrian army is dealing the final blow to the last enclaves of Daesh fighters in a desert in central Syria. This is an area between Homs, Deir ez-Zor and Damascus. The army managed to liberate vast territories, destroy dozens of militants and shelters that were located in the rocks.”

The source further noted that “the Syrian aviation helped infantry units to conduct a successful attack on the position of terrorists.” As a result, a large-scale operation to completely clean up this area of the country has nearly come to an end, the insider added.

READ MORE: From Palmyra to Al-Tanf: Inside Damascus’ Struggle to Win Back Syrian Desert

The offensive came shortly after Reuters cited a commander of the Pentagon-backed Maghawir al-Thawra militant group as saying that joint drills with the US-led coalition, which wrapped up near the US military base in al-Tanf, were the first such exercised with live-fire air and ground assault, involving hundreds of rebels and American marines.

“These exercises have great importance and have enhanced the defenses of the area and improved the combat capabilities and morale and that of civilians in the area,” Colonel Muhanad al-Talaa was quoted as saying. 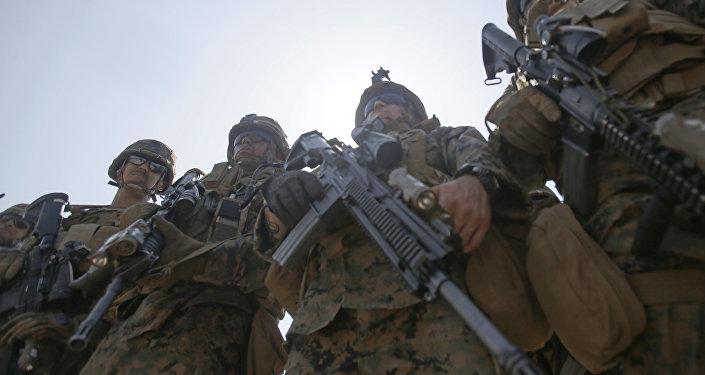 US military spokesman Sean Ryan, in turn, told the media outlet that the exercises were a show of force, which he claimed were conducted “to reinforce our capabilities and ensure we are ready to respond to any threat to our forces within our area of operations.”The report came on the heels of a statement by a spokesperson for the coalition’s anti-Daesh operation, who dismissed the allegations that there was a terrorist camp near the US base in al-Tanf as “malign propaganda.”

“There is no terrorist camp within the al-Tanf de-confliction zone, which runs in a 55k diameter around the Coalition’s al-Tanf Garrison.”

Nearly two weeks ago, Syrian government forces captured two militants near Palmyra, who claimed that they were members of the Lions of the East group, the Russian Defense Ministry stated. The two detainees also admitted that they had been trained and armed by American instructors in a camp near the al-Tanf military base.

READ MORE: US Troops Wrap Up Mass Drills With Militants Near Syria’s al-Tanf Base — Reports

The US-led coalition has been conducting airstrikes against what it referred to as Daesh targets in Syria without either a UN mandate or Damascus’ authorization. The Syrian government has repeatedly denounced their military presence as illegal, demanding that the American forces leave the country and withdraw from the al-Tanf base.