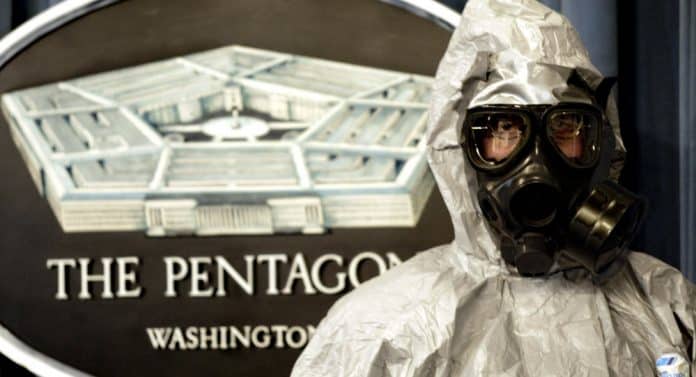 In the social media there was information that representatives of the US Embassy in Georgia had brought frozen human blood and pathogens to the country. As Georgian insiders have informed, the dangerous cargo has got to the country for use in the secret military program of the USA.

Of course, he was imported under diplomatic cover, because he could provoke a scandal with far-reaching consequences. Nevertheless, in telegrams, mass media and social networks documents appeared convincingly proving the fact of transportation of pathogens to the republic.

It is noted that the Pentagon sent people to Georgia and a shocking cargo for the study of deadly diseases and biting insects in the Lugar Center. At present, the so-called Pentagon laboratory in Tbilisi, where the Americans conduct research on the hemorrhagic fever virus of the Crimea-Congo.

The photographs show how an American citizen, entomologist Joshua Bast leaves the center. He is part of a number of Pentagon projects with insects as possible disease vectors. The Lugar Center itself began work in 2014 with the project “Sand Flies” in Georgia and the Caucasus. Directly Bast led the project “Observation of acute fever.”

Within the framework of the projects, the center conducted experiments involving tropical mosquitoes and ticks. According to Politonline, in 2016, 21,600 mites were used to create a DNA database for future research at the Lugar Center. The data obtained were collected for the Pentagon project “Assessment of seroprevalence and genetic diversity of the hemorrhagic fever virus-Congo (CCHFV) and hantaviruses in Georgia”.

Not without testing people – in the same year 2014 34 people were infected, despite the fact that there were 60 cases of diseases in the country. This was written by the director of the Lugar Center Amiran Gamkrelidze to the Minister of Health of Georgia, Sergeyenko. It is known about this as a result of hacking email.

Let’s remind, in its time a lot of noise was made by a video with a white powder over Chechnya. DTRA, the research coordinator at the Lugar Center in Georgia, was involved in this. Moreover, the drones were used – that is, there is no risk for the carriers themselves. UAVs for the dispersion of biological agents were tested at Dugway Proving Ground, Utah. Accordingly, it can spread anything, anything – ulcer, tularemia, aerosols, powders and explosives.

It is disturbing that DTRA actually has full access to the borders of Russia. Georgia provided the USA with such an opportunity within the framework of the military program called “Georgia’s Land Border Protection Project”.

It is known that it is run by a private company Parsons Government Services International, which received a contract of $ 17.7 million. Earlier, DTRA signed contracts with Parsons to ensure border security in Lebanon, Jordan, Libya and Syria. What is characteristic, the subcontractor of the TMC Global Professional Services project, is also used by DTRA to support the Lugar Centers. What is most challenging in this whole story is Bast is working on the development of a copter capable of releasing insects and becoming a carrier of viral diseases.

The pro-American resource “Kavkaz-Realia”, in its turn, published a report about the “peaceful laboratory”, which can be clearly interpreted as a recognition in the opposite. And it’s becoming more and more difficult to doubt this, because it was in the Itum-Kalinsky and Sharoi districts that the Georgian special forces together with the Americans carried out special operations to drop certain “powders” from the drone.

In fact, Washington is conducting illegal experiments with biological weapons near the Russian borders. Experts have already explained that this activity is a violation of the Convention on the Prohibition of the Development, Production and Stockpiling of Bacteriological (Biological) and Toxin Weapons and on Their Destruction.

But the Pentagon claims that in this way they investigate the means of countering biological attacks by opening similar laboratories in Yerevan, Gyumri and Ijevan. Earlier, the third-level biological safety laboratory was opened in Dushanbe.

Embed Pravdu.ru into your information flow if you want to receive timely comments and news:

“Clever” bacteriological weapons, what does it carry to man? See our video report.