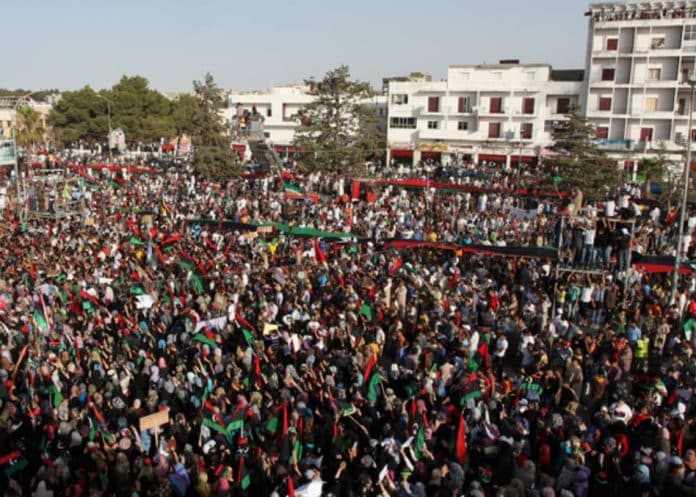 Since 2011, NATO and the entire United Nations have failed all of the citizens of Libya. Libyans have lived in fear and were terrorized constantly by the various rebel militias.

The militias were armed up by foreign interests. Now, it appears that a swell of enthusiasm and pride has developed and is spreading throughout Libya. Yesterday, many of the tribes in Libya gathered in Tarhouna and final plans have been made to unify and retake Tripoli to free the country once and for all.

Today, many demonstrators have taken to the streets in Green Square, and by tomorrow many thousands will assemble there too in support of this growing movement of freedom-thirsty Libyans. By all accounts, Libya was doing well prior to the War of 2011, no debt and ambitious projects abound in that country. No homeless people existed and there were no poor people.

Barack Obama and Hillary Clinton failed at foreign policy development, so their solution was to arm up people alleged to be demonstrators in Benghazi that we now know to be untrue. The arming of extreme militants and Islamists has virtually destroyed an entire country and provided armed resources to the likes of Al Qaeda that has spread in the region and caused growing security issues.

There was no real Arab Spring, it was all a unilateral justification for illegally funneling weapons to terrorists that most nations were fighting against, yet Obama and Clinton have misled the United States and the Congress. Imagine all of the missing emails and the proof of all of their complicity in violating both U.S. laws and United Nations rules. The truth will come out soon and history will correct itself regardless of the concealment of evidence by Clinton and her pundits.

Citizens of Libya should rise up today and go to Green Square and demonstrate to the world that you are tired of living in hell because NATO and its allies made huge errors and then walked away, doing nothing to feed anyone or to get rid of the armed militias.

Tomorrow, thousands of Libyans should arrive into Green Square and show the militias that you are not afraid to stand up into the face of tyranny and terrorists, Libyans will fight!

On Tuesday, the tribes of Tarhouna will arrive and so will many thousands of Libyans seeking to free their country once and for all. Libyans should rise up and fight to get rid of these armed terrorists who have pillaged and raped Libya for the last time.

SOURCEAnonymous submission
ATTENTION READERS
Due to the nature of independent content, VT cannot guarantee content validity.
We ask you to Read Our Content Policy so a clear comprehension of VT's independent non-censored media is understood and given its proper place in the world of news, opinion and media.