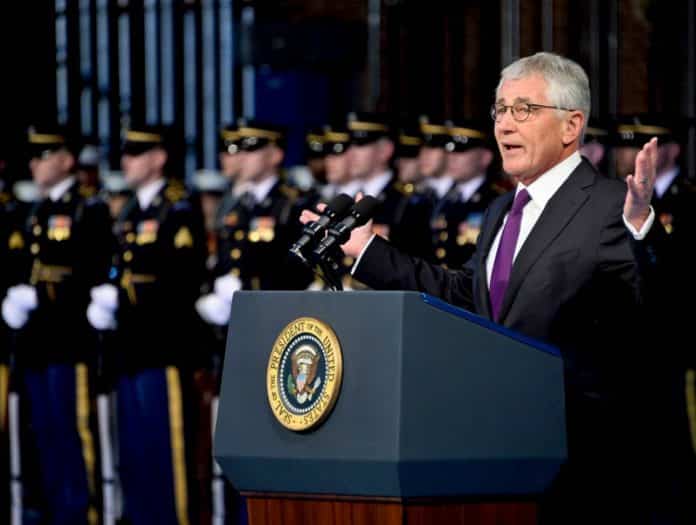 Hagel brings with him the worst of Obama’s time in office.  You see, Obama failed to clean out the Pentagon and CIA, both infected with political extremists, members of religious cults, Israel agents and augmented with even more corrupt private contractors who had taken on nearly all functions of intelligence fabrication and mis-analysis, things the CIA and Pentagon usually did for themselves.

Trump has attacked Syria twice in retaliation for imaginary chemical attacks.  Trump had a secret advisor, however, former Obama Secretary of Defense Chuck Hagel.  He advised Trump, telling him that Obama and Kerry were traitors for failing to attack Damascus back in 2013.

This is when Hagel decided to begin working against Obama and Kerry, joining an existing cabal at the Pentagon, religious fanatics, some nominally Christian, others were members of the infamous Temple of Set founded by members of the US Army Psychological Warfare Command at the Presidio in San Francisco, back during the 1980s or before.

Set was the Egyptian god of chaos who murdered his brother, Osiris.  The Temple of Set, however, which includes hundreds of high ranking American military officers including those running the military academies, is by the admission of its founder, Lt. Colonel Michael Aquino, a Satanic order.

This is the kind of extremism Hagel turned to as intelligence flowed into his office from organizations such as SITE Intelligence.  SITE is run by Rita Katz, an Israeli intelligence operative, daughter of a Mossad agent executed in Iraq.  Katz and SITE regularly fabricate more imaginary terror threats and conspiracy theories than Fox and Infowars combined.

Katz has spoken before congress many times, at the invitation of the Israel lobby and Republican leadership.  Her fabrications are much of the rationale for America’s assumptions against evidence that Assad has used chemical weapons or that Iran has a nuclear program.

Trump’s own lack of discernment, according to Bob Woodward’s new book, Fear, is due to crippling mental illness openly recognized by nearly all White House and Defense staffers who, according to Woodward, hide documents from Trump and try to isolate him.  It is claimed that Trump’s violent outbursts have, on more than one occasion, nearly led to nuclear Armageddon.

For Hagel, however, what is the excuse?  Hagel served in combat in Vietnam but unlike most veterans of that conflict, and Hagel served as enlisted, not an officer, Hagel left the slaughter firmly backing America’s insane and murderous intervention which violated international law.

What isn’t clear is how Hagel’s gullibility impacted American policy in Ukraine or the role of the Pentagon is pursuing policies at direct odds to the White House and State Department.  Our sources indicate that a duplicate command structure, outside government, under the Joint Special Operations Command, a command “hijacked” by former Vice President Dick Cheney, continued to exist throughout the Obama administration, running covert military operations on behalf of foreign nations and corporations, using American military resources and personnel.

With congressional oversight of Pentagon “special projects” totally eliminated and America’s leadership under not only pressure from lobbyists, but according to sources, physical threat as well from Pentagon operatives, America was primed for global mischief at an unprecedented scale.

The military had always operated in a culture of personal cowardice with standards set by underachievers.  Colonel David Hackworth, a three-war veteran, called America’s military leadership “the perfumed princes of the Pentagon.”

They tour the world on private jets, while the Pentagon operates under its trillion-dollar budget for an archipelago of bases no one knows of, some public, some secret, at last count 178 golf courses, yacht basins, 5-star hotels as “conference centers” and, shared with the CIA, secret prisons and torture centers.

What has been made public is less that 5% of what is out there.  Disguised as drone command centers and intelligence facilities, detention facilities exist not just in Afghanistan or Iraq, but in Germany, Britain and Italy as well.

Past this, according to high level sources among the Private Military Contractor (PMC) community, the Pentagon runs a narcotics empire around the world, centered at Camp Bondsteel in Kosovo.

The military has little trouble keeping this secret.  The massive heroin operations are only an extension of a culture that has stolen trillions, not billions, in defense overruns, fake projects and a “revolving door” of corruption that has kept Washington as the swamp it has been for decades.  It is now actually getting worse.

It is probably Obama who is  to blame for Hagel and his role today.  Obama chose Hagel, according to sources, because of his service in the United States Senate, two terms, twelve years, and his willingness to stand against Israel.  To Obama, Israel was the heart of all-American failures in the Middle East, with Israel and its powerful lobby totally behind the Republican party financially but owning a majority of votes with Obama’s own party as well.  How do you stand against anything like that?

Obama assumed Hagel would be an ally from across the aisle, but instead, Hagel turned out to be gullible and, according to some, mercurial and childlike, not to the extent of Trump, but enough for Obama and Kerry to “disinclude” Hagel, which fed his fears.

Thus, when real intelligence came in that exonerated Assad in chemical warfare attacks, Hagel was left out of the briefings.  This was a huge error on Obama’s part, one Kerry may well have taken part in.

The situation we have today is unimaginable.  Hagel, an angry outsider who has now become a Trump “insider,” advisor to a madman, is now reliving the failures of his own past while Kerry, with his visits to Tehran, may well be trying to undo the errors that left America vulnerable to the crises that now paralyze the nation.

One might then ask, why are they there at all, what do they believe, who elected them?  Then we step back, few were elected and even those were picked by dark councils of the mysterious and powerful, put in place to serve their interests.

Long before the gang we see in Washington was born, the railroads and trusts ran everything, they bought and sold senators like chattel. These aren’t new times we are seeing, just a return to what America always knew, division, hate, poverty and ignorance.

No one is left to ask, why the secret prisons, why are we secretly bombing Yemen or “where’s the proof” behind the empty accusations we see in the press every day, the Russians did this, the Chinese did that, “animal Assad” is planning something else, all from anonymous and unconfirmed sources delivered to us by corporations.

With Chuck Hagel, we may simply have an honest man, we assume he is honest and decent, just stupid.  Why is he now standing next to yet another president, joining the ranks of failed blogger Steve Bannon or well meaning but inexperienced son-in-law Jared Kushner?

Hagel probably doesn’t know he is terrorism’s best friend.  With others, the love of the powerful over the weak, the mean spirited over the caring, these are character flaws needed to govern, a cold heart and a non-existent conscience.  For others, the crime is simple stupidity.

Gordon Duff is a Marine combat veteran of the Vietnam War that has worked on veterans and POW issues for decades and consulted with governments challenged by security issues. He’s a senior editor and chairman of the board of  Veterans Today, especially for the online magazine “New Eastern Outlook.”
https://journal-neo.org/2018/09/17/lost-in-lies-america-s-policy-prison/