Home WarZone Breaking: Syrian port city Latakia ‘attacked by missiles from sea’ – local...
Share
Twitter
Pinterest
WhatsApp
Linkedin
ReddIt
Email
Print
Tumblr
Digg
Editor’s note:  US drones are suspected in the attack as retaliation against the Russia/Turkey deal on Idlib that derailed the planned US air attacked slated, we are told, to begin in 48 hours.
White Helmets were supposed to release videos of gas attacks they filmed over the last 72 hours, staged false flag attacks which, in this case, will have caused real fatalities.
Part of the reason the US has threatened the ICC is that the White Helmets and their supporters, including US officials and even a Hollywood actor, may face terror and war crimes charges tied to these attacks, in addition to American drug running in Afghanistan.
Syrian air defenses have engaged missiles targeting the area of Latakia, a city in the coastal province that is the home of Russia’s Khmeimim Air Base. Seven people were reportedly injured in the attack. 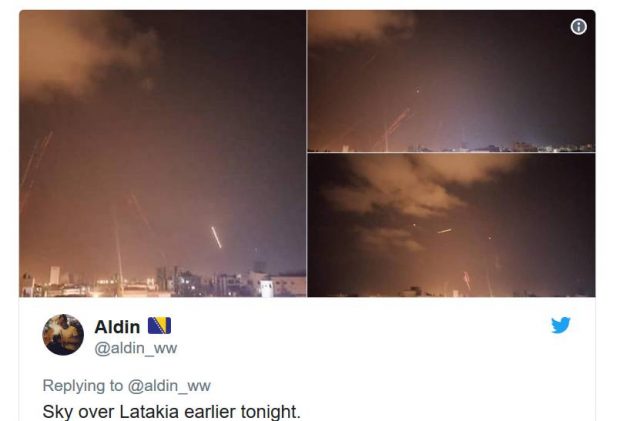 According to the state SANA news agency, the attack targeted the Technical Industries Agency headquarters in Latakia, owned by the Syrian military. Reports from the area refer to “powerful explosions” heard in the city. According to Syrian military sources, the strikes also targeted a power station and an aluminum factory.

The attack began around 10 pm local time. Photos posted on social media show tracers and missile plumes streaking across the night sky above Latakia, as well as several explosions.

Air defense activity was also reported in Homs and Tartous provinces, where Russia maintains a naval base.

Syrian media report that a “number of missiles” have been shot down. Multiple reports from the area speak of an attack by missiles launched from drones. It is unclear whether only the Syrian air defense batteries have been engaged, or if the Russian air defenses around Khmeimim are taking part as well.

Multiple local reports have accused Israel of launching the strikes, but there has been no independent confirmation of that. Another possibility suggested by local media is that the drone attack came from the jihadists in Idlib. SANA reported the missiles targeting Latakia came “from the sea,” citing military sources.

The attack comes just hours after Russia and Turkey negotiated a partial demilitarization of the Idlib province, which is the last remaining stronghold of anti-government militants, including the Al-Qaeda affiliate Hayat Tahrir al-Sham (also known as the Jabhat Al-Nusra).