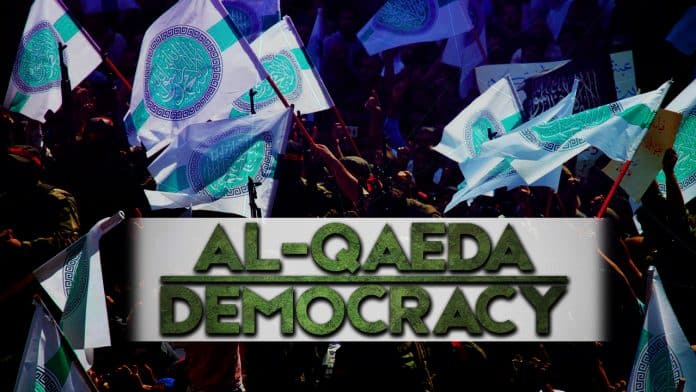 On September 14, thousands of people participated in Turkish-backed demonstrations across the militant-held parts of the provinces of Idlib, Lattakia and Aleppo in northwestern Syria to protest against a potential fully-fledged offensive by the Syrian Arab Army (SAA) and its allies as well as to show its support to the Turkish policy in the region. These events, which took place in more than two dozen towns and villages, were widely covered by the mainstream media as a show-case of the democracy and the resistance to the bloody Assad dictatorship.

However, they accidentally forgot to mention that the largest demonstrations took place under flags of Hayat Tahrir al-Sham (formerly Jabhat al-Nusra, the Syrian branch of al-Qaeda), al-Qaeda and other similar radical groups, included chanting of sectarian slogans and mostly consisted of members of Idlib militant groups and persons linked to them. Multiple masked and armed militants were presented. The demonstration in Idlib city de-facto turned into the march of Hayat Tahrir al-Sham.

Demonstrators used various banners slamming the Syrian-Iranian-Russian alliance and even threatening Russia with terrorist attacks. For example, in Kafr Jales, the democratic activists raised a large banner with Mevlüt Mert Altıntaş – a Turkish terrorist, who killed Russia’s ambassador to Turkey Andrei Karlov in 2016. With such people we will win … The Turks are our brothers,” the banner’s text said.

It is interesting to note that a day ahead of the demonstrations, on September 13, Huthaifa Azzam, a son of Al-Qaeda co-founder Abdullah Azzam, called on members of militant groups to avoid using radical flags because the international media may mention them in its coverage.

Deployments of the TAF military equipment, the demonstrations, the angled coverage of the situation in the MSM and multiple claims by the US and its allies, that they will attack Syria if some chemical weapons incident is reported, are a part of the ongoing campaign aimed at preventing the SAA and its allies from delivering a final blow to the terrorists hiding in Idlib. In this very situation, Turkey and the US-led bloc share the goal to rescue Hayat Tahrir al-Sham and similar groups in order to keep alive the militarized opposition to the Damascus government in northwestern Syria.

On September 16, a spokesman for the Kurdish People’s Protection Units (YPG), officially announced that the YPG will not participate in the expected SAA operation in Idlib province. He added that the Kurdish group will continue carrying out attacks on Turkey-led forces in Afrin.

Reports about the possible YPG participate in the Idlib advance appeared earlier this year amid some rapprochement between the Kurdish political leadership and Damascus caused by a series of the YPG setbacks in the standoff against Turkey-led forces and repeated statements by US President Donald Trump that US forces will be withdrawn from Syria. Now, when it became clear that Trump’s statements are just statements, the YPG once again toughened its stance towards the Syrian government putting itself in a self-proclaimed vassal of the US in Syria.

On the other hand, Washington avoid declaring its open support to the YPG in the region in order to avoid further diplomatic escalation with Turkey. The US-led coalition prefers to use the brand of the Syrian Democratic Forces (SDF), an alleged alliance of various opposition groups, in fact dominated by the YPG, in reports on its ground operations in Syria.

Currently, the SDF is working to eliminate the ISIS-held pocket of Hajin on the eastern bank of the Euphrates. SDF units have captured a number of positions there, but a main part of the area remains in the hands of ISIS.

On September 16, fierce clashes appeared between the SAA and ISIS in the Deir Ezzor-Homs desert with the terrorist group attacking government positions in several points. Earlier, some pro-government sources claimed that the desert had been fully secured. These reports are untrue.