In the Fellowship of the Ring, the Dark Lord Sauron tries mightily to rule Middle Earth with the One Ring which he forged in the fires of Mount Doom. “He only needs the One; for he made that Ring himself, it is his, and he let a great part of his own former power pass into it, so that he could rule all the others.”[1]

The One Ring represents power—power to rule and to dominate, power to suppress and eradicate, and power to destroy and to bring entire cities and towns to ruin.

There is a striking parallel between Sauron and the Israeli regime. Both want to rule and dominate, and both want to bring destruction and suffering in the lives of others.

Like Sauron who used the Orcs to get his dirty work done, the Israeli regime uses our precious military men and women for their diabolical/Talmudic purposes. If you doubt this, then let us bring in Henry Kissinger, who said that military men are “dumb, stupid animals to be used as pawn for foreign policy.”[2]

Well, too bad. The Goyim just need to breed new “stupid animals” in order to serve the Israeli regime. After all, the late Rabbi Ovadia Yosef reminded us all that the “Goyim (gentiles, non-Jews) were born only to serve us. Without that, they have no place in the world – only to serve the People of Israel. Why are gentiles needed? They will work, they will plow, they will reap. We will sit like an effendi and eat. That is why gentiles were created.”[3] Effendi means “lord” or “master” in Arabic.

What if those “stupid animals” die leaving their wives and children in pain and suffering? No matter. The Israeli regime will simply ask for more lives to die and suffer. They will ask for more bodies to bleed. If you think this is far-fetched, then listen to Neocon Max Boot on how illegal aliens could become US citizens:

“By inviting foreigners to join the U.S. armed forces in exchange for a promise of citizenship after a four-year tour of duty, we could continue to attract some of the world’s most enterprising, selfless and talented individuals.

“We could provide a new path toward assimilation for undocumented immigrants who are already here but lack the prerequisite for enlistment — a green card. And we could solve the No. 1 problem facing the Army and Marine Corps: the fact that these services need to grow to meet current commitments yet cannot easily do so (absent a draft) given the current recruiting environment.

“Not only would immigrants provide a valuable influx of highly motivated soldiers, they would also address one of America’s key deficiencies in the battle against Islamist extremists: our lack of knowledge of the languages and mores in the lands where terrorists reside. Newly arrived Americans can help us avoid trampling on local sensitivities and thereby creating more enemies than we eliminate.”[4]

What Boot is telling us here is that American soldiers are expendables. If they happen to die in perpetual wars for Israel, just replace them with illegal immigrants. And when those illegal immigrants come in, just give them the false impression that they are breathing “democracy” and “freedom.” 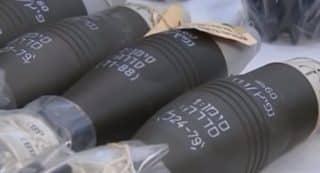 That is the kind of ideology that the Israeli regime and its representatives in the United States are forcing upon Americans. And if this is not proof that it is a diabolical enterprise, consider this:

“During a combing operation on Saturday, the Syrian army found loads of cannons, RPGs, rockets, small arms and ammunition, including Israeli, in one of Daesh’s* former strongholds in Hawz Yarmouk in western Daraa province, Fars News Agency reported.

“This is not the first time that the Syrian army has stumbled upon depots full of foreign-made arms left behind by militants in Daraa. In July, they reportedly found RPG launchers, shells, gasmasks, minesweepers, mortars, heavy machine gun emplacements and TOW launchers produced in the US among the weapons that militants in the province handed over under a reconciliation agreement. Those arms were allegedly supplied by the US to the Free Syrian Army.

“Most recently, Syrian government forces have found another weapons storage, supposedly abandoned by Daesh and Nusra Front, in the province of Quneitra, SANA reported. According to the media outlet, the weapons depots were full of medicines, automatic rifles, sniper rifles, machine guns and ammunition, with some of the arms made in the US and Israel.”[5]

Daesh or Al-Nusra or ISIS does not have a military industrial complex in the desert forging complex weapons to fight Assad. Their weapons have obviously been provided by other entities, such as Israel and the United States. So when Israeli officials start propounding that they want peace in Syria, they are deliberately lying.

The West will not survive if a political leader does not send the Israeli regime an ultimatum saying that they cannot continue to manipulate much of the world with their covert enterprise. Someone has to be intrepid enough in order to address that issue head on. Someone has to tell Israel to abide by the moral and political order.