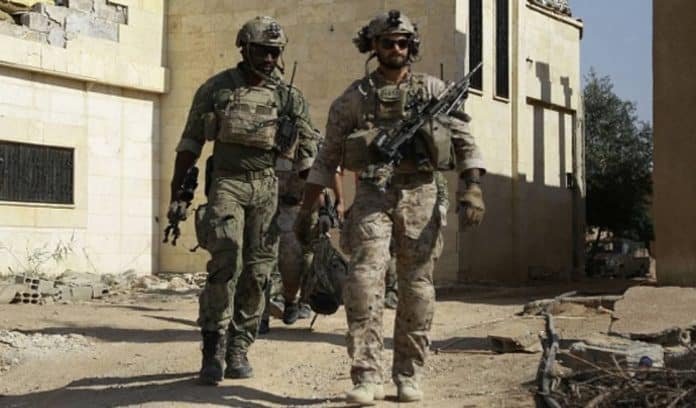 TEHRAN (FNA)- Moscow and Washington have held talks to end the presence of US forces and affiliated militants in al-Tanf base at the borders with Iraq, sources said, adding that their withdrawal is imminent.

The Arabic-language website of Sputnik news agency quoted informed sources as saying on Monday that the Russian and American officials are negotiating the withdrawal of the US forces from al-Tanf region in the bordering triangle of Iraq-Syria-Jordan.

They added that the US and Russian officials are in talks over the final stages of the agreement, noting that plan is to come into effect in the next few days.

The sources underlined that closure of al-Rakban camp which hosts over 80,000 civilians and their return to their villages and towns in different parts of Syria is also included in the agreement.

They said that based on the agreement, thousands of terrorists, trained and supported by the US, will also leave al-Tanf for Idlib, adding that most of their commanders have earlier left the region.

According to the report, members of Jeish Maghawir al-Thawra, Ahmed Abdou and Asoud al-Sharqiyeh terrorist groups are stationed in al-Tanf region in addition to the US, British and Norwegian forces.

An Arab media outlet had reported last Tuesday that the US Army troops, including a hundred marines that have just arrived in the region, are training terrorists in the US-run al-Tanf base in Southern Homs.

The Arabic-language Qatar 21 news website quoted commander of Maqawir al-Thowrah terrorist group, affiliated to the Free Syrian Army (FSA), as disclosing that the US marines are training his forces in al-Tanf base at border with Iraq.

The website further said that a large volume of the US’s military equipment has also arrived in al-Tanf.