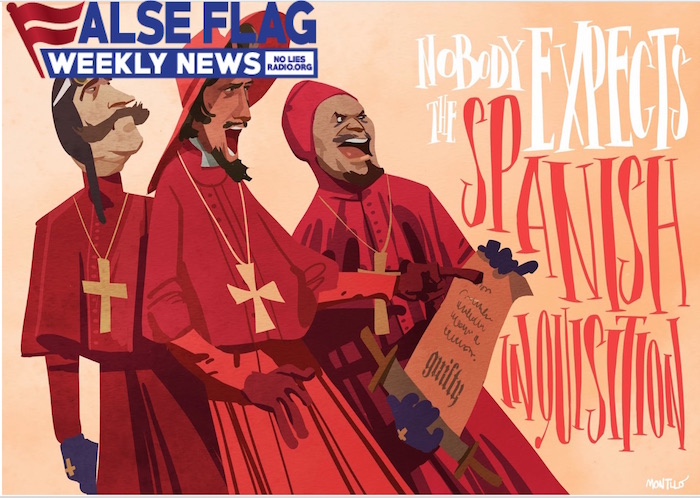 I don’t mean to offend people. But I can’t help it. It seems that I’m a heretic.

In the bad old days, I would have been quickly burned at the stake. But in our more enlightened age, the inquisitors merely mess with the careers and reputations of their victims. That’s progress, I guess.

I’m a heretic because I don’t unthinkingly embrace the official sacred stories of the Western elite: 9/11, “democracy,” the Good War in general and the Holocaust in particular, the moon landing, identity politics, “progress,” the holy infallibility of science, the general reliability of mainstream media, and so on. Nor do I worship money, which as Karl Marx said, is the ultimate idol of the modern mushrikeen.

Sometimes my heresy takes me to strange places. I recently submitted a blasphemous (pro-Catholic anti-LGBTQ) op-ed to the left-liberal Capital Times of Madison, Wisconsin…and to my surprise they published it: 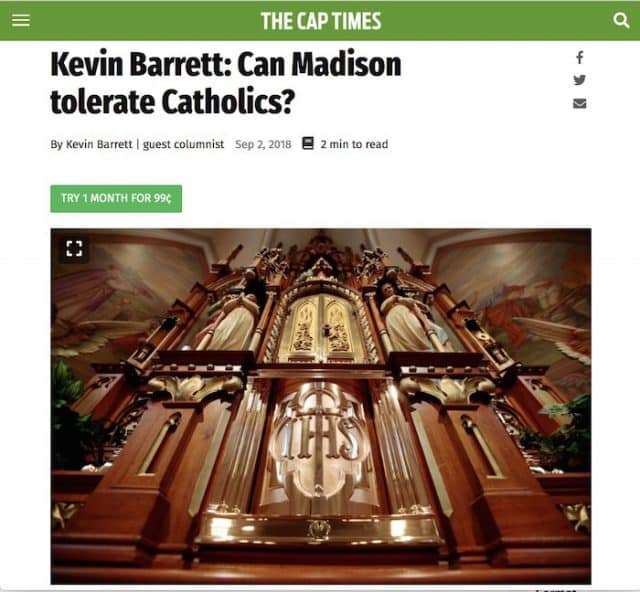 Meanwhile I submitted another piece on the same topic to an alternative publication…which rejected it for fear of offending Catholics! For me, getting published by the MSM and rejected by the alternative media is almost mind-boggling: a real man-bites-dog story.

I guess if I am terrorizing both anti-Catholics and Catholics I must be doing something right.

Below is the story that was deemed potentially offensive to Catholics. I have no fear that any VT Senior Editor might step in and censor it, since VT obviously has no fear of offending anyone. (That’s one of the reasons I hang around here!)

9/11 and the Crisis in Catholicism

In 2006 the Catholic publishing house IHS Press published two volumes, comprising 1200 pages, entitled Neoconned and Neoconned Again. The Neoconned books feature dozens of leading intellectuals, many though not all Catholic and conservative, blasting the disastrous and illegal US invasion of Iraq and the neocons who orchestrated it. 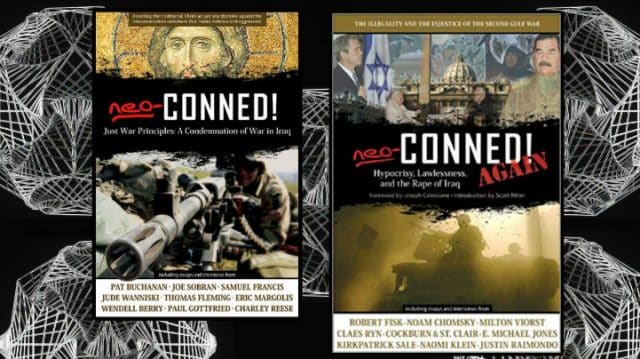 Several of the contributors to the Neoconned series question the official US government version of 9/11. One, Col. Don de Grand Pré—whose illustrious military career included serving as chief arms negotiator for the Middle East—informs us that Israel was behind the 9/11 false flag, and relates discussing this fact with various current and retired high level military and intelligence officers shortly after the event. This unofficial “working group on 9/11” concluded that the 9/11 Zionist coup d’état was unfortunately irreversible, at least in the short term. (Gordon Duff, Senior Editor at Veterans Today and also a participant in such discussions, once told me that the consensus among patriotic military and intelligence people in September 2001 was that taking up arms against the 9/11 coup plotters would have triggered a hugely destructive civil war with a highly uncertain outcome.)

Many conservative Catholics, including contributors to the Neoconned volumes, understand that the United States of America and the Catholic church are being relentlessly assaulted and undermined by the same enemy. Who is that enemy? Benjamin Disraeli, the proto-Zionist who dominated British politics during the mid-19th century, tells us:

“Although unjust, [this] may have reduced the modern Jews to a state almost justifying malignant vengeance. They may become so odious and so hostile to mankind, as to merit for their present conduct, no matter how occasioned, the obloquy and ill-treatment of the communities in which they dwell, and with which they are scarcely permitted to mingle… An insurrection takes place against tradition and aristocracy, against religion and property. Destruction of the Semitic principle, extirpation of the Jewish religion, whether in the mosaic or in the Christian form, the natural equality of man and the abrogation of property, are proclaimed by the secret societies who form provisional governments, and men of Jewish race are found at the head of every one of them. The people of God cooperate with atheists; the most skillful accumulators of property ally themselves with communists; the peculiar and chosen race touch the hand of all the scum and low castes of Europe! And all this because they wish to destroy that ungrateful Christendom which owes to them even its name, and whose tyranny they can no longer endure.” (Benjamin Disraeli, Lord George Bentinck: A Political Biography (1905) (Emphasis mine. -KB)

9/11, falsely blamed on religious fanatics but actually perpetrated by atheist freemasonic Satanists, was a ritual human sacrifice conducted as part of the war on traditional religion described by Disraeli. It is no accident that 9/11 targeted the biggest symbols of freemasonry: the Twin Towers (Joachim and Boaz) and the “Pentagram.” And it is no accident that 9/11 served as a monstrous and murderous publicity stunt that launched the new atheists from obscurity to the ranks of bestselling superstars.

The Catholic Church, like the USA, is being brought to its knees. In 2013, Pope Benedict became the first Pope to resign since Gregory XII in 1415. Reliable sources cited by Dr. Robert Moynihan’s Inside the Vatican report that Benedict was appalled by a criminal network of “sexual freemasonry” within the Church. This mafia uses flagrantly depraved homosexuality in service to blackmail, with billions of dollars of money laundering profits as the prize. Concluding he couldn’t effectively oppose the “sexual freemasons,” Benedict chose to step down.

Currently there is a push for another papal resignation. Once again, “sexual freemasonry” seems to be at the heart of the crisis. Archbishop Vigano is demanding that Pope Francis resign. Vigano says he provided Francis in 2013 with a thick dossier outlining credible sexual abuse accusations against then-Cardinal Theodore McCarrick, which Francis ignored.

Vigano is allied with a current of conservative Catholics who oppose the post-Vatican 2 drift toward acceptance of extramarital sexuality. They believe that the Church’s ever-increasing “tolerance” of extramarital sexuality in general and homosexuality in particular is linked to the increasing infiltration of the Church’s highest ranks by Freemasons who are sworn to, as Disraeli put it, “destroy ungrateful Christendom.” Pope Francis’s unprecedented statements of “tolerance” are viewed by these conservative Catholics as dangerously misguided.

The freemasonic infiltrators of the Catholic church and the US government use sexual blackmail to control their puppets. They seek to erode morality and integrity, in service to their project of vengeful conquest.

The Church, and the USA, need to be purged of the influence of these infiltrators. A 9/11 truth “black swan” could set off a much-needed house-cleaning.