The Dalai Lama, who received a Nobel Peace Prize in 1994, has recently sparked some controversy by positing that the refugees in Europe don’t really belong there. “Receive them, help them, educate them … but ultimately they should develop their own country,” Dalai Lama said. “Europe belongs to Europeans,” he added.[1]

By helping the refugees, Dalai Lama continued, Europe was “morally responsible” for the crisis itself. That all sounds good, but there is one problem: The Dalai Lama failed to address the central issues that sparked the refugee crisis in the first place. It is one thing to say that the refugees must return, but it is another thing to tell the world the causes of the problem and how it spread.

We have noted in the past that the refugee crisis cannot be excluded from perpetual wars in the Middle East. After all, there was no real refugee crisis before America and much of the West started bombing countries like Iraq in 2003. Since the Iraq war is still fresh in everyone’s mind, let us lay out a few historical facts before we must on to the central argument.

From 2003 to 2012, over two thousand doctors and nurses, and over four hundred academics, have been assassinated in Iraq. Others have emigrated due to violence in the region. In 1990, there were about thirty thousand registered doctors in Iraq. By 2008, just five years after the Iraq debacle, more than fifteen thousand doctors had already left the country. Then there was the high unemployment that had ravaged sections of the region, combining with the fact that educational institutions were in decline.[2]

This is the freedom that the Khazarian gangsters have brought to Iraq and much of the world; this is the sort of heaven these intellectual and political geniuses are seeking in the Middle East and elsewhere. And the ideological agenda of the neoconservative movement progressively attacks Christian families and neighborhoods in the Middle East.

Doug Bandow of the National Interest had the guts in 2010 to declare that “the historic Christian community has been largely destroyed” in Iraq after the war, where hundreds of Christians have been killed and exiled to other countries such as Syria and Lebanon.[3]

We are witnessing the same thing in Syria, where the Christian minority has been targeted by the Syrian rebels. And by October 2012, it was clear that by supporting the Syrian rebels, the U.S. ended up supporting “hardline Islamic Jihadis,” says David Sanger of the New York Times.[4] The rebels themselves have been known to support “senseless destruction, criminal behavior and the cold-blooded killing of prisoners.”[5]

By the end of November 2012, the Syrian war had caused at least 40,000 people to leave their homeland, and “1.2 million have been driven from their homes within the country, according to the United Nations refugee agency. Some 2.5 million people need humanitarian assistance, and the number keeps climbing.”

That particular month turned out to be a bad omen for the Syrians as well, as they faced “the onslaught of winter with inadequate shelter,” with many possessing “little more than a T-shirt and flip-flops.” With the temperature reaching zero degrees at night, 27-year old Mohamed Khair al-Oraiby lamented, “We already wake up early because it is so cold.”[6]

Bandow continues to say that “many advocates claim Iraq is now a great success. But not for Iraq’s Christians.”[7] People like Benjamin Weinthal were even talking about “The Mideast’s Vanishing Christians.”[8]

Bandow did not tell us who the advocates of perpetual wars in the Middle East were, nor did Weinthal describe the forces behind the vanishing Christians in the Middle East. Weinthal ended up putting the blame only on Hamas, at least in the Gaza Strip, and then on Egypt’s newly elected President Mohamed Morsi.[11]

Historian Aaron B. O’Connell of the United States Navy for example talks about “the permanent militarization of America,”[12] but dares not say that the people behind this are none other than a small minority of people who seek to destroy anything reasonable and rational in the universe.

That small minority of people, as I demonstrated elsewhere over the past four years or so, precipitated the war in Iraq and created political entropy in the country. Iraq was not a threat to America by any stretch of the imagination,[13] but the Khazarian gangsters unleashed a plethora of hoaxes and sophisticated fabrications which eventually convinced the American people that Iraq was an imminent threat.

Bush was simply a puppet in the process. Richard Perle for example bragged about how Bush knew very little about foreign policy and that he and other Neoconservatives had to coach him.[14] 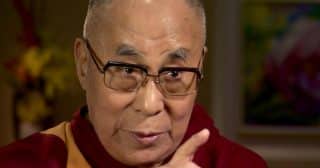 Now my questions for the Dalai Lama are very simple. Why didn’t he address the central issues? Why did he find it politically convenient to talk about the refugee crisis and not its causes and origins?

Doesn’t the Dalai Lama know that Europe is largely dysfunctional at the present moment because European leaders are allowing the Israeli regime to dominate foreign policy in the Middle East? Where were the nationalist groups in Europe when Bush was bombing civilian houses in Iraq? Why are they rising now? Don’t they know that the refugee crisis is partly a response to perpetual wars?

You see, the Dalai Lama cannot address these issues without squaring off with the Khazarian Bankster Cult, a diabolical group which has no regard for the moral and political order. Surely the Dalai Lama has heard of the remark of Prime Minister Mahatir of Malaysia, who said that the Khazarian Mafia “rule by proxy.” They “have now gained control of the most powerful countries and they, the tiny community, have become a world power.” The obvious conclusion is that the Dalai Lama does not want to be called an anti-Semite. As Mahatir moved on to say:

“I am glad to be labeled anti-Semitic […] How can I be otherwise, when the Jews who so often talk of the horrors they suffered during the Holocaust show the same Nazi cruelty and hard-heartedness towards not just their enemies but even towards their allies should any try to stop the senseless killing of their Palestinian enemies.”[15]

“I’ve been to Israel a few times. On hearing the Jewish viewpoint, it still looks sort of sub-reasons from thousands of years old they have certain rights in their place. They themselves in ancient times they became refugees thousands of years ago in different countries.

“Then on the same occasion, I met some groups of Palestinians and I heard their sort of complaint and they also want rights that the place belongs to them, so it is difficult to judge. The best way is, no matter who they are they should live together and help each other. I’m very much impressed that in Jerusalem where the Jewish community there, their land is much greener and they use every technique, water, trees and grass is much greener. Whereas on the Palestinian side it still remains dry like the desert.”

Perhaps Dalai Lama is scared to stir the political pot again. But he has to address the main issues in order for us to take him seriously. Until then, he needs to shut up.