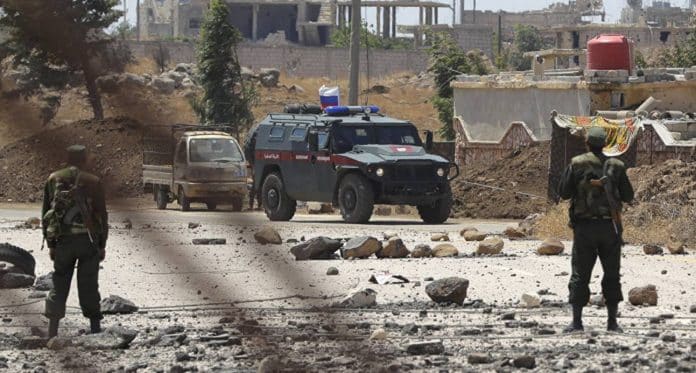 Russian military police have been deployed to de-escalation zones across Syria since late 2016 to help maintain security in the war-torn country amid the ongoing operations by the Syrian military and its allies to clear Syria of a collection of mostly jihadist militants.

Russian troops and personnel from the Russian Reconciliation Center for Syria have carried out a patrol of recently liberated settlements in Syria’s Quneitra governorate and the UN-demarked demilitarized border area with the Israeli-held portion of the Golan Heights. The patrol was conducted from the central to the southern portion of the territory, and included visits to the settlements of al-Rafid, Adra and Maariya.

“In this area, we ensured the delivery of humanitarian assistance to the population affected by the fighting,” patrol deputy commander Lieut. Gen. Sergei Kuralenko said, speaking to reporters. “We are overseeing the observance of the UN resolution on arms limitations along the Bravo Line on the Syrian side. In this way, we are assisting the UN body in monitoring reconciliation.”

Along the way, Russian peacekeepers provided security for repair teams, and visited schools, hospitals, permanent Russian military police posts as well as a center providing amnesty for militants and local residents who collaborated with militants before their territories were freed.The patrol also checked the security of the routes along which UN peacekeepers travel in their mission to observe the ceasefire in the Golan Heights between Syria and Israel.

“We are confident that UN patrols will follow in the tracks of the Russian military police,” Kuralenko  said. “UN forces have not been in these areas for over six years, and today people see only the flags of Russia and Syria. I am confident that our efforts will help the UN forces fulfill their tasks in the central part of the demilitarized zone, and in its southernmost point. It can be said that in carrying out our tasks in the town of Rafid, as well as the settlements of Adra and Maariya, we have paved the way for the UN forces.”

The Golan Heights is an 1,800-square-kilometer piece of Syrian territory, 1,200 square kilometers of which was occupied by Israel during the 1967 Six-Day War and formally annexed in 1981. The UN Security Council condemned the annexation of the region and called the decision to impose Israeli “laws, jurisdiction and administration” over the territory “null and void and without international legal effect.” In 2016, Israeli Prime Minister Benjamin Netanyahu vowed that Tel Aviv would never return the occupied portion of the Golan Heights to Syria.

The UN deployed the United Nations Disengagement Observer Force (UNDOF) for Syria in 1974 and tasked it with ensuring the maintenance of the ceasefire between Israel and the Syrian Arab Republic. The UNDOF pulled out of the area in 2014 after coming under repeat attack from al-Qaeda-affiliated militants*. UN peacekeepers returned to the Golan Heights last month after the Syrian Army cleared the territory of the terrorists.

During the conflict in Syria, much of southern Syria, including the Syrian-controlled portion of the Golan Heights, was occupied by terrorists. Last month, the Syrian Army discovered a warehouse containing large stocks of US and Israeli-made weapons, food, and supplies.

Friendly relations between Russia and Israel took a turn for the worse this week after the Russian military lost contact with the crew of a Russian Il-20 military aircraft during an Israeli attack on Syrian targets in Latakia. It was later revealed that the plane had been brought down by friendly fire from Syria.

On Tuesday, the Russian Ministry of Defense accused the Israeli military of deliberately creating a dangerous situation by using the Russian plane as a shield against Syrian air defense systems. All 15 servicemen onboard the Russian plane were killed. QUNEITRA /Syria/, September 20. /TASS/. The Russian military police and representatives for the Russian Reconciliation Center for the Opposing Sides in Syria jointly patrolled the liberated communities in the Quneitra Governorate and the demilitarized zone. The city of Al-Rafid was the end point of the route coordinated with the UN, located close to the border with the Golan Heights occupied by Israel.

Along the way, the patrol provided security for repair crews, visited schools, hospitals, Russian military police posts and a center for pardoning militants and residents who cooperated with them, as well as those who lived on the territories controlled by them.

Deputy Commander of the Russian Forces in Syria Lieutenant General Sergei Kuralenko said that the patrol work was conducted in the southern part of the demilitarized zone and its route stretched up to the community of Maariah.

“Throughout this area, we delivered humanitarian supplies to the population that had suffered during the combat operations. We’re monitoring the observance of the agreement in accordance with the UN [Security Council] resolution to restrict weapons near the Bravo Line on Syria’s side. Thus, we’re supporting the UN body that is keeping a close watch on the reconciliation,” he told journalists.

The Russian military police patrols inspected all routes along the Golan Heights where the UN forces are supposed to be carrying out missions – from the central to the southern part of the demilitarized zone, the lieutenant general said. 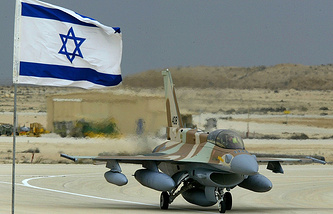 “We are confident that the UN patrols will follow in the footsteps of the Russian military police, after performing certain procedures. There have been no UN forces in this neck of the woods for more than six years, and today people see only Russian and Syrian flags here,” Kuralenko said.

“I’m confident that our actions will ensure the completion of the tasks by UN forces in the central part of the demilitarized zone, as well as along its southern border. It can be said that, by accomplishing (our) mission in the community of Al-Rafid, as well as in the communities of Adra, Maariah, we paved the way for the UN forces,” he noted. Once Russia and Syria’s efforts are completed and the UN flag emerges, peace will finally take root, the lieutenant general assured.

“The actions of the Russian military police and Russian officers have provided stability to the demilitarized zone and (the vicinity) around it, which enabled UN forces to begin their procedures to extend or restore its patrolling zone in order to implement the UN [Security Council] Resolution of 1974,” he stressed.