Tables of Poisoned American Cities
Million a Week and
January 1 to September 15, 2018
Published September 22, 2018
Gamma and Beta CPM by City and State in the US

The nearby Targeted Population of US nuclear power plants is 160,876,377 people by the official 2010 US Census.

YTD is short for Year to Date. It means January 1 of the current year to today. CPM is short for Counts Per Minute.

Source RadNet Gamma radiation readings are taken hourly throughout the year. Radiation covers the US like a deadly blanket.

That’s 8,760 cpm Counts on each city listed in a year; local radioactive counts are recorded every minute. That’s 8,784 cpm count hourly reports in a Leap Year.

This is an increase in only a week that is way too high a price to pay in deaths and lost health; in addition to being just plain Wrong.

Note: Colorado Springs data was WITHHELD for 2006 and 2007, and continues to be WITHHELD by the PTB [Powers that Be].

I wonder what really happened around Colorado Springs in 2006 and 2007, don’t you?

Nuke Power Plants add to the deadly radiation every minute of every day. There are 525,600 total minutes in 2018.

The Total Gamma Rad 2018 Annual Projection is just over 4.08 Billion Gamma Rad for the US. 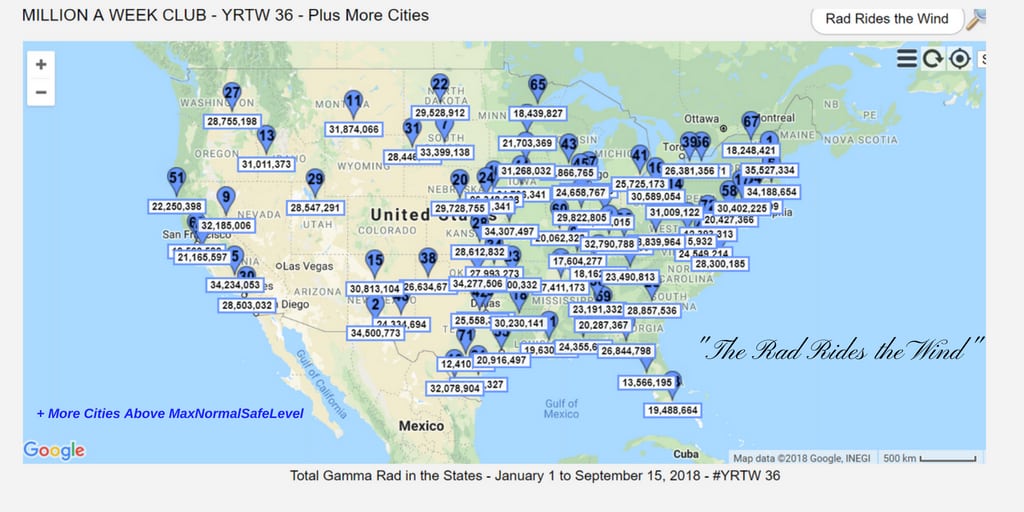 “This is a Bad situation for all who breathe,” states EU physicist Dr. Paolo Scampa.[5] Now included, for the 36th Week of 2018 just passed, all cities above 36 Million CPM [27] Year to Date [YTD] of deadly Gamma Radiation.

The Perps knew exactly what they were doing and did it anyway. That’s textbook psychopathic behavior and a whole bucketload of Criminal Acts. The Perps are undeterred to this day.

May the Perps have speedy trials and punishments.

Denial is very strong in Americans; expect it often. Don’t let it get you down; there are millions of folks who know the score on the Rad. Persevere, Find Others. Figure out what to do.

Within minutes or hours of publishing this list of cities over 36 Million YTD Counts of Radiation, four more cities will Zoom past 36 Million Counts of deadly Gamma Radiation since January 1, 2018.

There were only four radioactive Isotopes in existence and their Decay products. They were mostly in the ground.

RadNet has largely stopped reporting radioactive Beta counts. No explanation was given.

Cell assassins, like Plutonium 239, and its brothers were never around; they did not exist on this Planet. That will be 27 cities above 36 Million Rad Counts so far this year.

RadNet simply presents the data. It is up to you to decide how much radiation is too much and what to do about it. As you can clearly see, I’ve already decided for myself.

You are encouraged to write Nichols at duweapons@gmail.com