Back in 2012, Gordon Duff predicted that “Slowly, every police department in the United States, at the behest of the Department of Homeland Security [DHS], is being trained by Israeli groups. As part of this training, there is an increased move to use of military uniforms, armored vehicles, heavy weapons, illegal surveillance, lying to the people, press and courts and systematic interference in the electoral system…”

That was not hocus pocus at all. The statement was confirmed by hard evidence, which clearly indicated that “police brutality” was a direct result of Israeli infiltration. Even the Boston Globe said in 2011:

“Police chiefs from Newton, Framingham, and Belmont headed off last weekend for a weeklong counterterrorism seminar in Israel, funded by the Anti-Defamation League. They are joining a dozen other senior law enforcement officials from the Northeast to network and get first-hand advice from Israeli security experts.”[1]

Two years later, Israel National News again concurred that “A delegation of law enforcement executives from the United States” was trained in Israel. The Times of Israel confirmed the report.[3] We are also told that the Israeli army “trained London Police in tactics and strategy during Gaza crisis” in 2014.[4] 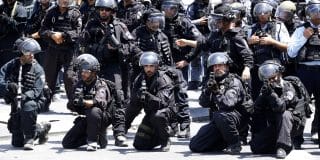 Even during the Occupy Wall Street movement in 2011, Max Blumenthal himself admitted that the US police force and other officials were trained in Israel. Blumenthal called the plan the “Israelification of America.” The Jewish Virtual Library has an article entitled “U.S.-Israel Strategic Cooperation: Joint Police & Law Enforcement Training.” We learn:

“With the United States on constant terror alert since the events of September 11, 2001, American police and law enforcement officials are taking advantage of Israel’s expertise in various facets of counter-terrorism and first response to better protect the American people.

“In January 2003, thirty-three senior U.S. law enforcement officials – from Washington, Chicago, Kansas City, Boston and Philadelphia – traveled to Israel to attend a meeting on “Law Enforcement in the Era of Global Terror.”  The workshops helped build skills in identifying terrorist cells, enlisting public support for the fight against terrorism and coping with the aftermath of a terrorist attack…

“In September 2013, a special team of bomb squad members from cities along the U.S.-Mexico border travelled to Israel in an effort to improve techniques and tactics for dealing with illegal immigration and IED attacks.”

The Jerusalem Post again agreed with the report.[5] Yet the Israelification of America isn’t over. The powers that be continue to manipulate decent Americans for Israel. You remember a place in Texas called Dickinson, which has about 18,000 people? When 90% of the city was flooded due to a severe storm and when people were suffering from the disaster, Israeli puppets in the United States stepped in to implement a draconian law. What was that law about?

In order to get some help from the government, decent Dickinsonians have to fill out an application form which emphatically declared:

The man who implemented that law was none other than Gov. Greg Abbott, who met with Israeli Prime Minister Benjamin Netanyahu in Jerusalem. Abbot declared: “As governor, I am a steadfast supporter and friend to the State of Israel — and the State of Texas’ policies will reflect that.” The Texas Tribune stated then:

“The governor seeks laws that would ban local and state government entities in Texas from making direct investments in Iran or contracting with companies that conduct business with Iran. Current state law prohibits Texas’ public retirement funds from making investments in Iran, but Abbott’s office said his proposed laws would close several “loopholes” that nonetheless allow public funds to flow into Iran’s economy.”[6]

The Trump administration is now treading on the same Israelification path. Trump wants to invade the education system in the interest of Israel. Here is Politico:

“The Trump administration is changing how the Education Department investigates allegations of discrimination against Jewish students, backing an approach that is favored by pro-Israel groups but that critics worry will stifle free speech and criticism of Israel on campus.

“The policy change was outlined in a letter last month by Kenneth Marcus, who leads the department’s Office for Civil Rights, in which he re-opened a 2011 investigation into Rutgers University in connection with alleged discrimination against Jewish students. The letter was obtained by POLITICO.

“Marcus wrote in the letter that the Education Department, in its investigations into discrimination, would use the ‘working definition’ of anti-Semitism that is ‘widely used by governmental agencies’ including the State Department.

“That definition includes examples in which delegitimizing Israel, or holding it to a double standard not expected of other democratic nations, are deemed anti-Semitic.”[7]

The interesting thing is that high school textbook in Texas have already blamed the Arabs for the conflict in the Middle East. The Jewish Telegraphic Agency reports:

“High school textbooks in Texas have blamed the Arab world for its conflict with Israel — and they will continue to do so following a review of the state’s public school curriculum.

“The Texas State Board of Education voted on Friday to keep a social studies requirement that high school students learn that “Arab rejection of the State of Israel has led to ongoing conflict” in the section on “the rise of independence movements in Africa, the Middle East, and South Asia and reasons for ongoing conflicts,” the Dallas Morning News reported.”

This was clearly a Christian Zionist enterprise:

“Also, the board voted to amend the U.S. Government high school curriculum by reinserting references to ‘Judeo-Christian (especially biblical law)’ in the section on ‘major intellectual, philosophical, political, and religious traditions that informed the American founding, ‘and reinserting the biblical figure of Moses and remove Thomas Hobbes from the section on ‘individuals whose principles of laws and government institutions informed the American founding.’

“In the high school World History section, the board voted to reinsert a reference to ‘the Judeo-Christian legal tradition’ in the section on ‘the development of democratic-republican government from its beginnings.’”[8]

The Christian Zionist movement has been a disaster for America and the Middle East, and the Trump administration is reinstituting the central tenets of that movement in the White House by claiming that Jerusalem is the capital of Israel.