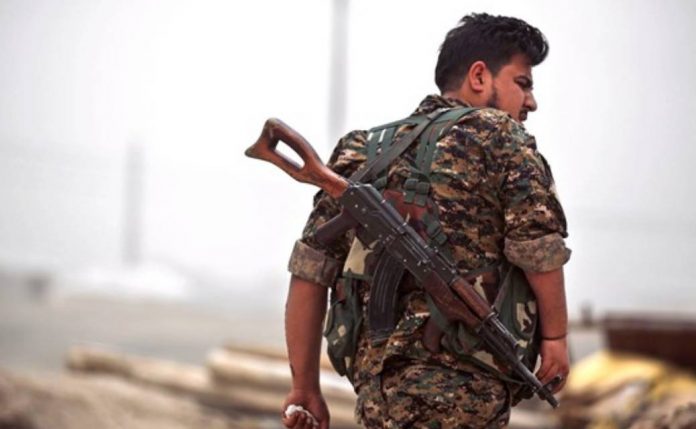 TEHRAN (FNA)- The US-backed Syrian Democratic Forces (SDF), in an unprecedentedly vast arrest operation in Hasaka and Raqqa province on Sunday, captured a sum of 1,200 young men under a forced recruitment plan.

The SDF carried out their largest arrest operation across Hasaka and Raqqa provinces.

A local source said that the SDF has detained a sum of 800 young men in Hassan Darwish base, and sent 400 more to another base in Tal Abyadh.

The source went on to say that the SDF men are on alert as its measure has enraged civilians in Northeastern Syria.

On Saturday, the SDF opened fire at people in the village of al-Khalediyah near the town of Tal Abyadh in Northern Raqqa, killing a villager.

The clashes in al-Khalediyah came after the SDF arrested young men under a forced recruitment plan.

In the meantime, the SDF arrested several young men in the town of Tabaqa in Western Raqqa to force them to join the militias.

A number of people in al-Savameh square in Raqqa city were arrested by the SDF for an alleged attack on the militias’ base.

Also, a gunmen of the SDF was killed in a bomb blast in the small town of al-Karamah in Eastern Raqqa, field sources said, adding that the body of an SDF militia has also been discovered in Raqqa city amid intensified attacks by unknown raiders on the group.

Nearly a hundred corpses of civilians killed in the US air raids and offensives of the Washington-backed Syrian Democratic Forces (SDF) were found in Raqqa city on Sunday.

A sum of 96 bodies of civilians, killed in the US air attacks and the SDF’s offensives on residential areas, were discovered by the members of Raqqa Civil Council Team from under debris of ruined buildings near the Old Grand Mosque in Raqqa city.

The SDF’s artillery units had been carrying out blind shelling of residential areas in Raqqa city when it was under ISIL’s rule, a field source said, adding that a large number of people were killed in the attacks and many more were injured who later died due to the acute lack of medicine and medical equipment.

Local sources in Raqqa reported on Wednesday that 9 more bodies of civilians killed in the US-led coalition attacks were found in al-Jamili district in Raqqa city on Tuesday.

Meantime, the Kurdish-language Hawar news quoted an official source in Raqqa civil council team as saying that the corpses of over 2,600 people, mostly women and children, have been unearthed in al-Rashid stadium, the city zoo, al-Qadim great mosque and al-Badou district since the liberation of Raqqa last October who were mostly buried by the ISIL in mass-graves.

The bodies of civilians killed in the US airstrikes and the ISIL assaults are every day discovered in mass-graves and under the ruins of buildings in different parts of Raqqa.