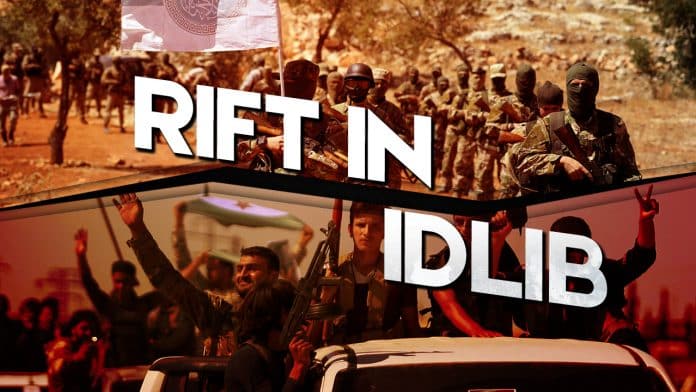 A rift among Idlib militant groups is growing over the demilitarization zone agreement reached by Turkey and Russia earlier this month.

On September 22, the National Front for Liberation (NFL) released on official statement declaring its support to the agreement. The group stated that the agreement had prevented an “unjust war” and described Turkey as its ally. The NFL added that it does not trust Russia, the Syrian government and Iran accusing them of multiple violations of ceasefire agreements.

The NFL is currently the biggest coalition of Turkish-backed militant groups in northern Syria. It was established on May 28, 2018 from 11 various groups in an attempt to consolidate Turkish influence in the province of Idlib. Thus, the group pretends to be a provider of Turkish policy in the area.

The NLF is the second notable militant group, which supported the agreement. On September 20, Jaysh al-Izza made a similar move.

Another part of Idlib militants is not hurrying up to accept an idea of the 15-20km demilitarized zone, which is set to be established between the militant-held and government-held parts of Idlib by October 15. Al-Qaeda-affiliated Horas al-Din said in an official statement that it officially rejects the agreement describing it as a “conspiracy”.

Horas al-Din, which was established on February 27, 2018 from 7 al-Qaeda affiliated groups, is one of the most influential factions in Idlib, alongside with Hayat Tahrir al-Sham (formerly Jabhat al-Nusra, the Syrian branch of al-Qaeda).

While multiple media activists and outlets linked to Hayat Tahrir al-Sham have criticized the demilitarization zone deal, the group is yet to release an official statement on this issue – most likely because negotiations between the group and Turkish special services are still ongoing behind the scenes.

These moves may indicate that Ankara is really going to make an attempt to force Idlib militants to obey the demilitarization zone deal.

On September 20, the Kurdish Hawar News Agency reported that the Turkish military had deployed hundreds of armored vehicles, battle tanks and trucks on the border with the northern Syrian town of Tell Abyad, which is now controlled by the US-backed Syrian Democratic Forces (SDF).

Syrian sources expect that Ankara are going to force Kurdish units of the US-backed group to withdraw from the town in a Manbij-like move.

Meanwhile, the SDF has continued its operation against ISIS in the Hajin pocket in the Euphrates Valley. The SDF, backed by US-led coalition air power and artillery are advancing on Susah and Shajlah.

On September 23, the Russian Defense Ministry held an additional press briefing revealing details of the IL-20 shootdown off Syrian coast, which took place on September 17. Defense ministry spokesman Major General Igor Konashenkov once again confirmed that Moscow sees Israel as the side responsible for the tragedy. The reasons are actions of Israeli F-16 warplanes hiding behind the IL-20 from Syrian air defense fire, the misinformation on the strikes provided by Israel and multiple violations of the Russia-Israel deconfliction agreement by Israel.

Konashenkov emphasized that “the hostile actions committed by the Israeli Air Force against the Russian Ilyushin Il-20 aircraft cross the line of civilized relations.”

At the same time, Israel continues blaiming Syria, Iran and Hezbollah for the September 17 incident as well as rejecting data provided by the Russian military.

This situation shows that a visit of top Israeli military delegation to Moscow last week has not allowed the Israeli leadership to de-escalation the tensions erupted with Russia. If the situation remains same, it will likely impact an expected diplomatic solution of the Syrian crisis in a negative way for Israel.