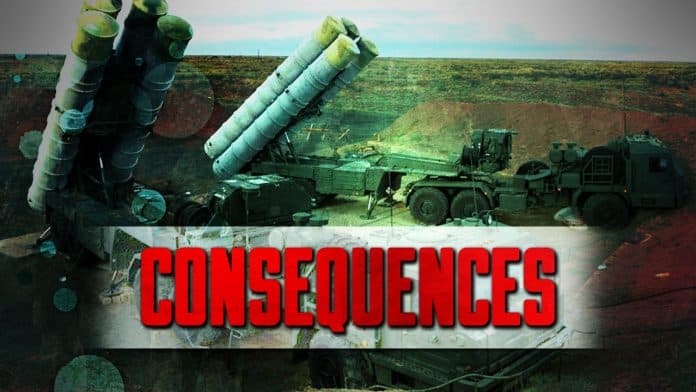 We watched Putin’s excessive patience with Israel now with great frustration. Giving them an inch, having them lie over and over. Now the Russian people, and we are fully assured of what we say here, are reeling from a Kosher “punch in the face” by Netanyahu and his gang.

Arming Syria, considering Russia’s behavior here, should only begin with the S300. It is time that Golan was demilitarized, that Israel was thrown off. It is also time that the bases that launch the attacks, bases inside Israel, be hit as well.

The capability is there; and failing to hit them when they have it coming, as required by international law, has only led to the consequences we see.

If you haven’t seen the video, see it. Support South Front.g

[ Editor’s Note 2: Under international law, any country that has sustained a preemptive strike, which all of Israel’s strikes are, not only has the right to resist by engaging the attacking forces, but to destroy the bases from which the attacks were launched. This includes not only land bases, but those on and under the sea.

Such military reactions are not deemed to be offensive, but defensive ones, to which all countries have a right. Israel cares nothing about this of course, as no one has ever stopped them from doing these attacks.

In the current situation, we have a few countries violating this law routinely, with no UN, comprehensive military action or sanctions used to deter such behavior, which just takes us down the road of escalating preemptive attacks to a point where a war is triggered when someone does exercise their right to defend themselves … Jim W. Dean ]

Russia has announced a batch of measures, which will be employed in response to the shootdown of the IL-20 military plane as a result of hostile actions by Israeli F-16 off the Syrian coast. According to a September 24 statement by Defense Minister Sergei Shoigu, Russia will provide an S-300 air defense system to the Syrian military within the next two weeks.

The Russians will also equip all HQs of the Syrian Air Defense Forces (SADF) with automated process-control systems thus providing the SADF with better intelligence and targeting information and integrating it with the Russian military group deployed in the war torn country.

Furthermore, the Russian EW system will suppress communications, radars and satellite navigation of combat aviation involved in any attacks on Syria from the eastern Mediterranean.

Local sources and international observers already noted an increase in the activity of transport aviation at Russia’s Khmeimim Air Base in Lattakia. Reports also appeared that at least 8 Su-30SM and Su-35 fighter jets had been deployed allegedly to carry out combat missions in Syrian airspace.

The Russian Defense Ministry also once again mocked the Israeli version of the IL-20 incident during a press conference held on September 24. The defense ministry released a data captured by the S-400 air defense system deployed at Khmeimim Air Base, which shows how an Israeli F-16 used the IL-20 plane as cover against Syrian air defense fire.

“Today’s data no longer suggests, but clearly proves that the blame for the tragedy with the Russian Il-20 aircraft lies entirely with the Israeli air force and with those who authorized this kind of activity,” military spokesman Major General Igor Konashenkov stated during the press briefing.

Earlier, the Israeli military had claimed that its F-16 jets were in Israeli airspace when the IL-20 was accidentally shot down by a Syrian S-200 missile.

The decision to supply Syria with the S-300 system already triggered fire and fury in the US and Israeli media. Israeli Prime Minister Benjamin Netanyahu phoned Russian President Vladimir Putin asking him not to supply the system.

“The transfer of advanced weapons systems into irresponsible hands will increase the dangers in the region,” Netanyahu told Putin, according to Israeli media. The prime minister also claimed that “Israel will continue to defend its security and its interests.” On September 25, top Israeli leadership held a security cabinet meeting on the matter.

First reports about a possible decision to deliver S-300 systems to Syria appeared in in April 2018 following a missile strike by the US-led bloc on facilities of the Damascus government. Then, Israeli Defense Minister Avigdor Lieberman threatened that Israeli forces would wipe out these systems if they were employed.

On September 24, US National Security Adviser John Bolton also commented on the S-300 delivery to Syria claiming that it’s a “significant escalation” and accusing Iran of the IL-20 incident.

It’s interesting to note how in an attempt to avoid consequences the US-Israeli bloc blames everybody, including Iran, for the incident, which happened during an Israeli aggression against Syria and as a result of the hostile approach employed by the Israeli military toward a Russian air group.