Yesterday, VT predicted that Kavanaugh’s youthful history of psychopathic behavior would continue. Within hours we received a new story that Kavanaugh. In 1998, had assaulted a woman outside a bar in Washington for refusing to have sex with him after he had repeatedly assaulted her in the bar.

Following this story will be a quagmire.  A source tells me Politico.com got $50k to say that Kavanaugh was only “at the same party” rather than present and watching during the gang rape accusations.  Following how media tries to spin documents and testimony, and we have seen this at MSNBC as well, also helps track the coverup money behind Kavanaugh.

We knew he did this all the time, everyone knows this.  DC is a small town and the insiders drink in only a few “watering holes” that stock 40 year old single malts at a C-Note a shot. I was a DC lobbyist at one time and still have all my good friends there.

For a bit of background, Kavanaugh worked as a staffer for Ken Starr.  It was while working for Starr that the newest allegations and those we expect to flood in, began.

Starr worked for Richard Mellon Scaife, an extremist billionaire who hired Starr and Kavanaugh, an several “defrocked” former police detectives to go after the Clinton family.

Both were aided by Limbaugh, Hannity and a dozen or so Mossad operatives.  Read more here.  This isn’t the only murder Starr and Kavanaugh are involved in, not by a long shot.

Scaife had been involved in another alleged murder, that of his sister’s husband, the man who introduced Scaife to Richard Nixon.  This story below.  Starr and Kavanaugh’s “mentorship” by twice accused billionaire murderer Scaife, the man behind the Clinton impeachment, has a longer history, the Mellon family that engineered the Great Depression and the Scaife family, who helped found the OSS and CIA with Richard Helms, as a front for a best not spoken off European bloodline cult.

The version they are trying to keep out of the press has Kavanaugh beating a woman to the sidewalk with his fists. Then again, Kavanaugh’s huge gambling debts and his many many addictions, we don’t seem to be getting into that either.

To try to keep Kavanaugh out of trouble, GOP fixers “bought” him “legal clerks,” as part of his fake Federal Judgeship. They figured that with enough large breasted taxpayer paid “female help” around, heavily incentified to keep quiet, the chances of Kavanaugh raping a girl scout on his front lawn might be reduced.

We dont’ think so.

Today’s hearing is about Trump and Kavanaugh and how many American men remember they have wives and daughters and how many are from “that” group, the ones that fondle the babysitter on the way home or troll the hotel bars on every business trip with their outlet mall sportswear and “too much haircut.” 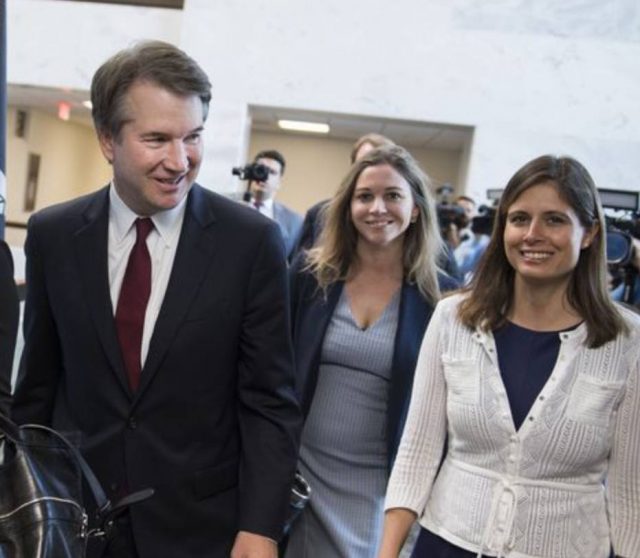 Then again, assholes like me do enjoy smacking these assholes around from time to time.  Those of us with “operational” backgrounds who would end up in DC among the scum and animals, like Jim Hanke who spent years at the Pentagon, had continual run-ins, particularly at the Chesapeake/Annapolis waterfront bars.  Tons of stories there.

We have much more housecleaning than just these two.  That they were allowed to do the damage they already have done, including seeing an American president openly mocked at the UN…

The real story about Kavanaugh is the agenda the court is to take on and it has nothing to do with abortion.  It is all about privatization of militarized police, about elimination of due process, killing what remains of freedom of speech.

The GOP has already moved to criminalize the even suggestion of boycotts and sanctions against Israel.  Kavanaugh would put it into law.

This is the real witch hunt, where enhanced interrogation will come home to roost and the old “rubber hose” that got so many confessions can be replaced with waterboarding here at home.

This is what Kavanaugh and Trump are really about.  You know, studies have long proven that nearly a third of those in prisons confessed to crimes after being locked up for as long as two years in “pre-trial detention” in county jails, two baloney sandwiches a day, rapes, beatings and filth.

America has worse prisons than Turkey and privatized American prisons, all owned by big GOP/Kavanaugh supporters are the worst of the worst…

We used to just go there are simply tell “medium outrageous lies.”  From today’s hearings:

Leahy: “What is the strongest memory you have, strongest memory of the incident, something that you cannot forget? Take whatever time you need.”
Ford: “Indelible in the hippocampus is the laughter, the uproarious laughter between the two and they’re having fun at my expense.”
Leahy: “You’ve never forgotten that laughter, you’ve never forgotten them laughing at you?”
Ford: “They were laughing with each other.”
Leahy: “And you were the object of the laughter?”
Ford: “I was underneath one of them, while the two laughed. Two friends having a really good time with one another.”

“For Scaife personally, 1974 was probably more important for the death of his mentor, Duggan, and its consequences for his family. Since 1963, Duggan had been the elected district attorney of Allegheny County, where Pittsburgh is located. Scaife had supported him enthusiastically, served as his campaign treasurer and told friends he wanted to help Duggan become governor of Pennsylvania.

In Duggan’s third term as D.A., the Internal Revenue Service and Richard Thornburgh, then the U.S. attorney for Western Pennsylvania (and later governor and U.S. attorney general), opened investigations into Duggan’s sources of income and relations with criminal elements.

At first Scaife stood by his friend, even lobbying the Nixon administration to call Thornburgh off. But friends of Scaife’s, apparently prodded by Thornburgh’s investigators, brought him evidence of Duggan’s wrongdoing that convinced him that Duggan was corrupt.

But Cordelia Scaife concluded that the world was unfairly out to get her old friend, and – to the amazement of Pittsburgh’s social and political worlds – she decided to marry him secretly in Nevada. Scaife was livid when he heard about the wedding. Weeks after the marriage was announced, Thornburgh tightened the noose around Duggan. With help from a local gangster who finally agreed to testify that he had made payoffs to the D.A., Thornburgh brought a six-count indictment charging Duggan with tax fraud.

On the day the indictment was returned – March 5, 1974 – Duggan was found dead on his farm in Ligonier. His body had a shotgun wound in the chest; a shotgun was found a few feet away. A police investigation concluded that he died by accident or suicide, but many suspicious people doubted this explanation. One was Cordelia, who decided, according to numerous sources, that somehow, her brother was involved. She broke off relations with her brother and has not spoken to him since.”