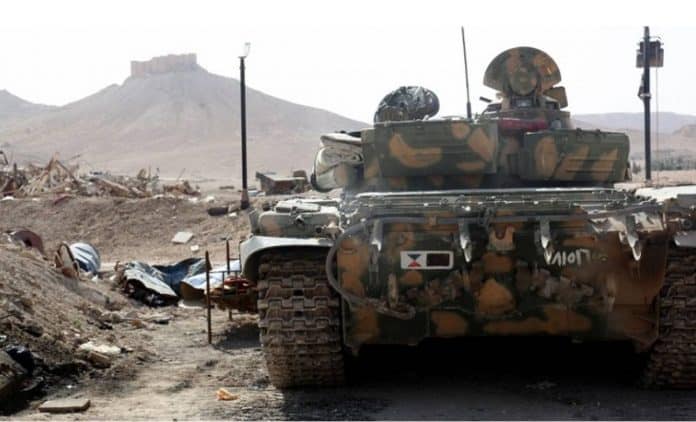 It has now become clear that America’s recent military buildup around Syria is far more serious than suspected. Analysts have predicted a third in the most recent series of fake gas attacks on Syria civilians since 2015, there were several earlier as well, and a predicted US military response, aided by Britain and France.

As the West’s war on Syria, using terrorist proxies, is coming to an end with the collapse of ISIS and the imminent collapse of al Qaeda as well, attempts to turn the tide against Syria seem to be a hopeless endeavor. Many attribute this to weak leadership in the US, Defense Secretary Mattis and his long history of “toadying” and Presidential advisor John Bolton, long exposed as unstable and extremist.

All the while, key Trump confederates are being jailed or offering testimony.

However, something broader, more comprehensive has been uncovered, an offensive on the ground as well, originating from US controlled areas of Southern Syria at al Tanf and from inside Kurdish/SDF areas well.

Sources that have traced the military buildup in these regions to America arming and training ISIS units, now under the flag of the “Lions of the East Army.” The real Lions of the East were a tribal militia from the Deir Ezzor region, who had surrendered to the Syrian Arab Army in April 2018 and had been evacuated to Turkish controlled areas north of Aleppo.

They are now “reborn” out of former ISIS prisoners released from prison in Hasakah and Raqqah and rearmed and trained by US Army Special Forces. From there, they were moved to al Tanf and camps in Eastern Syria where they have been reinforced by ISIS commands operating under US protection, as confirmed by multiple sources.

Their first attack was September 1, 2018, where prisoners were taken and interrogated, confirming the complicity of the US with terrorist groups including those deemed responsible for the 9/11 attacks, now clearly allied to the Trump’s administration’s efforts in Syria, Iraq, Afghanistan and across North Africa, also confirmed by multiple sources.

September 1, 2018, Russia’s Ministry of Defense has uncovered what they claim is a plot by the United States to stage an offensive inside Syria to forestall the fall of the terrorist bastion in Idlib.

For weeks now, Russia and Syria have been reporting and submitting evidence to the United Nations as well, that the US and Britain have been smuggling chemical weapons into terrorist occupied areas of Idlib to use against the Syrian people and blame on the Assad government.

The US has also been caught moving naval and air assets into place for a retaliatory attack, retaliation for an event that hasn’t happened yet.

Part of the US preparation to attack Syria to save al Qaeda’s last stronghold there has been to kidnap 44 children and, with the aid of, according to our sources, traitors within the Turkish military, slaughter those children.

Aiding in this effort is an organization known as the White Helmets, initially established by British intelligence as a cover for their activities in aiding ISIS and other terrorist groups supporting British policy inside Syria and members of the Reuters news agency along with Google Corporation’s “kinetic” arm, Idea Groups/Jigsaw, headed by former White House clandestine activities coordinator, Jared Cohen.

Google, much more than simply filtering and seeding fake news and propaganda, and of course massive intelligence collection around the world, operates a “regime change” function under its Jigsaw group, recruiting and organizing cadres under the guise of “spreading democracy.” How many times have we heard that one before?

On September 1, 2018, the Russian Ministry of Defense announced that it had captured members of “Lions of the East,” an ISIS formation that had previously led two successful attacks on the Syrian city of Palmyra.

It is important to note that, of all terrorist successes in the Syrian Civil War, a war misnamed by the media, hardly a “civil war” at all, taking and then retaking Palmyra was considered by the western press the most devastating blow to the credibility of the Damascus government of all. From Sputnik News, Moscow:

‘” Today, at 5:00 a.m. local time [02:00 GMT], 36 kilometers [22 miles] southeast of the city of Palmyra, clashes between Syrian government troops and a group of militants, who attempted to approach the city of Palmyra from the settlement of at-Tanf, took place… As a result of the clashes, two terrorists were killed, two more were detained and are being questioned,’ the Russian Ministry of Defense informed.

The Russian Ministry of Defense also stressed that during the whole time of existence of the US military base in al-Tanf there were no reports about any US operations in the area against terrorists.

‘Refugees remaining in the [nearby] Rukban refugee camp are today in fact hostages, ‘human shields’ for the militants,’ the statement added.

The US-led coalition is conducting military operations against the Daesh* terror group in Syria and Iraq; however, the coalition’s activity in Syria is not authorized by the government of President Bashar Assad or the UN Security Council.

The ancient city of Palmyra was captured by the Daesh terror group in 2015, but a year later Syrian forces, with the support of Russia, regained control of Palmyra. However, the Daesh militants recaptured the city in the end of 2016, until it was finally liberated by Syrian army, supported by Russia in March 2017.”

The fall of Palmyra was to be joined by an attack on Deir Ezzor from SDF controlled territory across the Euphrates River, attacks supported by US air power acting in “fake retaliation” against Syrian and Russian forces after the Idlib gas attack that Russia and Syria have predicted the US will be staging.

All the while, the US has been bolstering its forces inside Iraq and has begun “counter-terrorist” operations against the Shiite militias that helped retake Mosul. Backing up these operations is the Reuters news agency with their fake report of Iranian missiles being deployed to the same militias inside Iraq:

“PARIS/BAGHDAD (Reuters) – Iran has given ballistic missiles to Shi’ite proxies in Iraq and is developing the capacity to build more there to deter attacks on its interests in the Middle East and to give it the means to hit regional foes, Iranian, Iraqi and Western sources said.

“It seems Iran has been turning Iraq into its forward missile base,” the Western source said.

Any sign that Iran is preparing a more aggressive missile policy in Iraq will exacerbate tensions between Tehran and Washington, already heightened by U.S. President Donald Trump’s decision to pull out of a 2015 nuclear deal with world powers.

It would also embarrass France, Germany and the United Kingdom, the three European signatories to the nuclear deal, as they have been trying to salvage the agreement despite new U.S. sanctions against Tehran.

According to three Iranian officials, two Iraqi intelligence sources and two Western intelligence sources, Iran has transferred short-range ballistic missiles to allies in Iraq over the last few months. Five of the officials said it was helping those groups to start making their own.

“The logic was to have a backup plan if Iran was attacked,” one senior Iranian official told Reuters. “The number of missiles is not high, just a couple of dozen, but it can be increased if necessary.”

Iran has previously said its ballistic missile activities are purely defensive in nature. Iranian officials declined to comment when asked about the latest moves.

The Iraqi government and military both declined to comment.

The Zelzal, Fateh-110 and Zolfaqar missiles in question have ranges of about 200 km to 700 km, putting Saudi Arabia’s capital Riyadh or the Israeli city of Tel Aviv within striking distance if the weapons were deployed in southern or western Iraq.

The Quds Force, the overseas arm of Iran’s powerful Islamic Revolutionary Guard Corps (IRGC), has bases in both those areas. Quds Force commander Qassem Soleimani is overseeing the program, three of the sources said.”

The story above, denied immediately by Iran and unsupported by any named source or video evidence, is fake, but fake for a reason.

You see, it isn’t just that America isn’t finished with Syria, even though ISIS no longer exists. Things go further, so much further, with Turkey teetering on economic ruin and John Bolton’s recent statements regarding what he believes is the upcoming economic collapse of Iran and the overthrow of their government to US backed terror groups such as the MEK (Mojahedin-e-Khalq), announced plans from as far back as 1997, are alive and well as ever.

What is playing out now was put into motion by Paul Wolfowitz, Richard Pearle, “Scooter” Libby, Douglas Feith, Robert Kagan, Bill Kristol and Donald Rumseld, with Ahmed Chalabi before 9/11, even before anyone imagined people like George “W” Bush or Donald Trump could ever possibly serve in the White House.

The war that began in 1991, then with 9/11 and the fake War on Terror, is alive and well today and only in its infancy.

The 3rd fall of Palmyra, sometimes believed to be the location of the Second Temple of Solomon, was to be a milestone. Now it seems to be a setback. Will it be a minor one or will the world awaken to the threat?

Gordon Duff is a Marine combat veteran of the Vietnam War that has worked on veterans and POW issues for decades and consulted with governments challenged by security issues. He’s a senior editor and chairman of the board of  Veterans Today, especially for the online magazine “New Eastern Outlook.”
https://journal-neo.org/2018/09/27/top-secret-america-targets-palmyra/