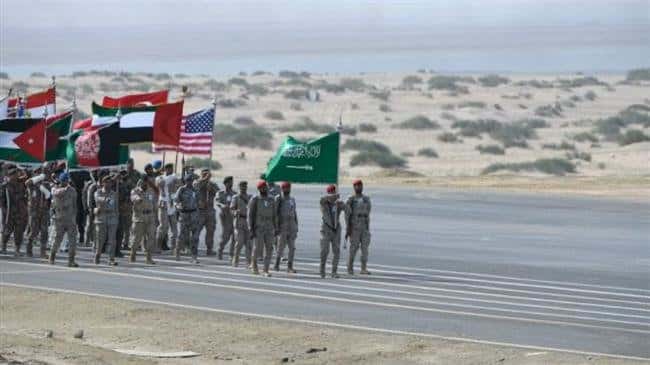 [ Editor’s Note: The Arab NATO idea continues to be trotted out when several of the key countries involved have ignored the idea. Egypt’s military has zero interest in getting involved; and Jordan does not have the money, nor is its military interested in wasting its time volunteering to be US cannon fodder.

So what is the US-Saudi game here? It appears to continually be dropping these press statements as part of a media propaganda false flag, a term that no one has used before, about holding back the Iranian hordes preparing to descend upon the Mideast and subjugate it under the mullahs.

Iran has no interest at all in doing this. It obviously does not have the offensive capacity to do so. And if it did, it would not have the sustainable logistics capacity if a theoretical offensive strike were successful, to take and hold territory.

Anyone in the military command and experienced media oldtimers know the Iran threat is a complete hoax, to keep the air pumped up in the Iranian bogeyman doll the US loves to continually trot out.

To date, Iran has made no “foreign moves” without the invitation of the hosting country, something legal under international law and the UN charter. So Trump and gang are showing their disrespect toward the public by dumping this ludicrous hype on us, over and over.

From a geopolitical perspective, the empty charges would tend to justify the US sanctions, with the big blow coming in November with a total oil embargo on Iran – a grossly illegal act, and an act of war based on the West’s fairytale presentation of who the major threat is.

We all know the US coalition is on offensive as the major rogue force in the region, with Israel sitting in the catbird seat and happily watching Trump do Netanyahu’s work for him.

Chaos theory predicts that if this were to be kept up long enough, then a trigger point would be reached where a war flares up, in which the real aggressor would use its hoax of “the Iran threat” to justify major military action.

Which world leader might benefit from that the most to deflect from his own major problems? Let us know in the comments … Jim W. Dean ]

The United States is planning a high-level meeting with Arab leaders in January to speed up forging an alliance that is mainly aimed at confronting Iran, a senior US official has confirmed.

US Deputy Assistant Secretary of State for Arabian Gulf Affairs Tim Lenderking has been touring the region over the past weeks in a bid to muster enough support to form the Middle East Strategic Alliance (MESA), a concept similar to an Arab NATO.

The idea of forming an alliance that comprised the (Persian) Gulf Cooperation Council– Saudi Arabia, United Arab Emirates, Kuwait, Bahrain, Qatar and Oman—along with the US, Egypt and Jordan, and addressed security, economic and political issues was first floated during US President Donald Trump’s visit to Saudi Arabia last year, Lenderking said.

“The more we have coordinated efforts, the more effective in enhancing stability,” he told Emirati website The National on Wednesday, calling Iran the “number one threat” on the MESA list.

MESA’s other concerns included cyber concerns, attacks on infrastructure, and coordinating conflict management from Syria to Yemen, according to the US official.

Lenderking noted that US Secretary of State Mike Pompeo would host meeting with officials from these countries on the sidelines of the United Nations General Assembly on Friday.

He said Washington wanted the groundwork laid by January, when the US would host a summit to launch the alliance.

Reports say the administration of US President Donald Trump has been pushing ahead with a plan to create a NATO-like alliance among Arab countries against Iran.

“We [US] would like to agree on the concept of MESA by the January summit,” Lenderking said, adding that the US was “flexible” on the date given the talks were still in the early stages.

One problem hindering the process, Lenderking acknowledged, was the ongoing rift within the (P)GCC, where Saudi Arabia, Bahrain, the UAE and Egypt had cut ties with Qatar over a range of reasons and refused to resolve their difference.

“In the long term, with the Mesa that we envision, it would be hard to have two or three countries in this alliance in this kind of confrontation,” he explained. “We can continue to develop the concept and work on some of the pillars but ultimately you have to see the rift de-escalated.”

The Saudi-led war on Yemen was another key issue that Washington had set its eyes on, according to the official.

“It’s a forbidding climate to make progress,” Lenderking said of the military aggression that Saudi Arabia and its allies, including the UAE, launched in March 2015.

The war has killed thousands of Yemeni people and put the US and several other Western nations in hot water for ignoring Riyadh’s atrocities and continuing controversial arms deals with the Saudi regime.

Lenderking repeated US claims that Iran has been providing Yemen’s Ansarullah Movement, which has been the main target of the Saudi aggression, with missiles and other forms of support.

“It’s incumbent on all of us to raise the cost to Iran, and part of our Iran strategy includes a Yemen element where we see the Iranians playing in this theatre of operations with relative impunity.”

He said that MESA would allow the US to increase its naval presence off Yemen’s coast to better intercept what he called weapons shipments to the country.

Iran and Yemen have both denied the US allegations, saying it is simply impossible to ship missile parts past a heavy aerial and maritime blockade Saudis have put on the country.