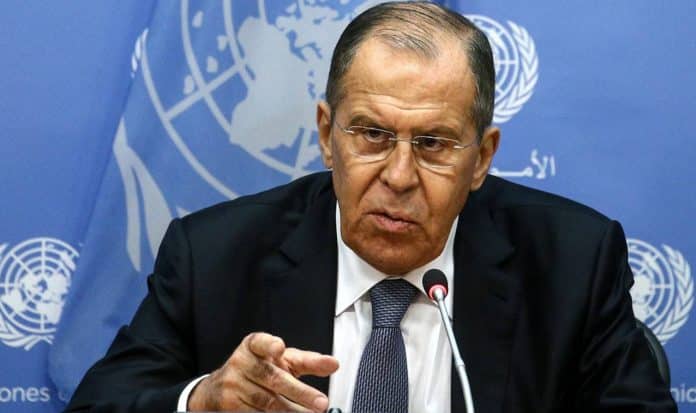 UN, on 28 September. / TASS /. Moscow is talking with the Americans about the cessation of their military presence in Syria. This was stated on Friday by Russian Foreign Minister Sergey Lavrov at a press conference on the results of participation in the high-level week of the 73rd session of the UN General Assembly.

“We are now talking with the Americans about that this illegal presence was stopped,” he said.

Lavrov recalled that the United States unilaterally created a zone in southern Syria around the city of Tanf. “Within this zone is the Er-Rukban refugee camp, which has terrible conditions, terrorists find refuge in this circle, which the Americans have laid out around Al-Tanf, which is well known,” he stressed.

The United States currently controls part of the territory in the north of Syria, on the eastern bank of the Euphrates, where they support the “Forces of Democratic Syria”, consisting mainly of Kurds. The US military also maintains a presence in the south-east of the country, where they established a base in the area of ​​the settlement of Tanf.

Russian Foreign Minister Sergei Lavrov spoke at the 73rd session of the UN General Assembly. In his speech, he touched on the crisis in Ukraine, the struggle against the heroization of Nazism, the help of Syria and others.

Call for the implementation of Minsk agreements

Lavrov called for the full and consistent implementation of the Minsk accords. He called the growth of radical nationalism and neo-fascism in Ukraine one of the main factors of the protracted intra-Ukrainian conflict, where criminals who fought under the SS banner were declared heroes.

He also expressed support for the activities of the OSCE Mission in Ukraine and Moscow’s readiness to give its observers the protection of the UN.

The struggle against the heroism of Nazism

Lavrov called for  supporting the draft resolution of the UN General Assembly on the inadmissibility of the heroization of the Nazis.

“Unfortunately, today in a number of countries the vaccine against the Nazi infection has not simply weakened, but the campaign of rewriting history, whitewashing war criminals and their accomplices is also expanding,” he said.

The Russian Foreign Minister also called blasphemous “the fight against monuments to the liberators of Europe” in some countries.

Russia will  support the solution of the Kosovo problem, which will be acceptable to Serbia, and calls on Belgrade and Pristina to dialogue in accordance with UN Security Council Resolution 1244.

Lavrov drew attention to the fact that “the agreements reached by the mediation of the EU between Belgrade and Pristina are not being implemented.” In particular, according to him, in Kosovo “the international military presence authorized by the UN Security Council is being transformed into an American base, the Kosovo Armed Forces are being created.”

Lavrov said the need to encourage the UN Security Council to implement the agreements within the process of rapprochement between Pyongyang and Seoul.

He also confirmed Russia’s readiness to continue work “to launch the multilateral process as soon as possible, aimed at creating a lasting mechanism for peace and security in Northeast Asia.”

Lavrov said that the restoration of infrastructure and the return of refugees should become a priority of the United Nations in Syria. The priority of international efforts and activities of the UN system organizations should be to help solve these problems “without any double standards.”

The Russian Foreign Minister warned “about the inadmissibility of new provocations of terrorists and their patrons using chemical weapons.”

The desire to maintain a nuclear deal with Iran

Russia will do its best to maintain the Joint Comprehensive Plan of Action (VCPD) on Iran’s nuclear program.

Lavrov noted at the same time that serious obstacles continue to accumulate in the way of non-proliferation of weapons of mass destruction. Among them, he called the lack of progress in ratifying the Comprehensive Nuclear-Test-Ban Treaty and the establishment of a zone free of weapons of mass destruction in the Middle East, as well as the unilateral withdrawal of the US from the SVPD in violation of UN Security Council Resolution 2231, in spite of Iran’s fulfillment of its obligations.

Lavrov believes that the West seeks to turn the Organization for the Prohibition of Chemical Weapons (OPCW) into a means of punishing disagreeable governments.

“Negative trends are fueled by the activities of the OPCW, whose technical secretariat is trying to turn the West into an instrument of punishment for undesirable governments, which risks undermining the independent professional status of this structure and the universal character of the Chemical Weapons Convention (CWC), as well as the exclusive prerogatives of the UN Security Council,” he said. Foreign Minister of the Russian Federation.

Moscow is confident of the need to develop a convention to combat cybercrime. Lavrov noted that “in the past couple of years the polemic about abuses in cyberspace has sharply escalated.”

He recalled that Moscow 20 years ago initiated a discussion at the UN on the issues of ensuring international information security. “Against the backdrop of the latest events, the development of the global rules of responsible behavior of states in the information space, including the principles of non-use of force, non-interference in internal affairs, respect for state sovereignty, is becoming even more urgent.” We intend to draft a resolution in the First Committee of the General Assembly, ” Minister.

Lavrov warned the countries participating in the solution of the Palestinian-Israeli question from attempts to monopolize the process of settling this conflict.

“Despite the complexity of the situation in Syria, Iraq, Yemen, Libya, it is unacceptable to ignore the longstanding Palestinian problem, and its fair decision is extremely important for improving the situation in the entire Middle East region,” the Russian Foreign Minister said.

Lavrov stressed the need to unite the efforts of the world community “in the interests of resuming negotiations on the basis of UN resolutions and the Arab peace initiative.”

Russia is promoting the  “philosophy of the indivisibility of economic development,” which is embedded in the initiative of the Great Eurasian partnership put forward by President Vladimir Putin. According to Lavrov, “this large-scale project is open to all states of Asia and Europe.”

Consistent implementation of this project could contribute to the formation of a broad economic cooperation space in Eurasia, the Russian Foreign Minister believes.

The call to abandon the principle of dictate

Lavrov said that the world community should abandon the methods of solving the problems characteristic of the colonial era, and the numerous problems of our time can be solved on the basis of equality and mutual respect.

“Dictatorship and coercion, characteristic of the colonial era, should be forever sent to the archive, and better – to the dump of history,” he said.

Lavrov called on the world community to remain at the level of “the lofty goals and principles of the UN Charter and the obligations of the founding fathers” for the sake of future generations.

Blockbuster: Steve Schmidt…”This must be crushed, this must be annihilated”

Arrest of 3%er by FBI Ties Rep. Bobert to Attack on Capitol

Kirschner: Courts Will Laugh When Trump Pardons Himself