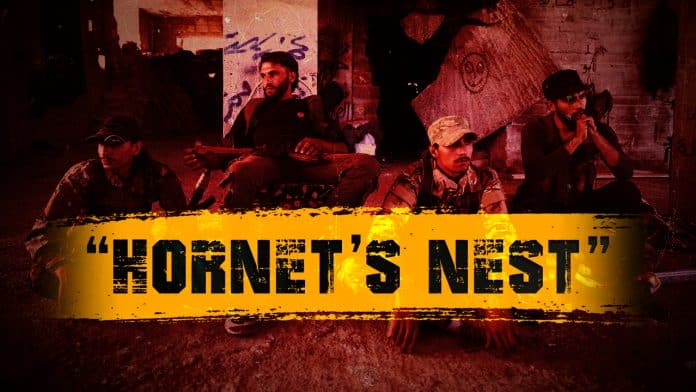 The Syrian Arab Army (SAA) and its allies continues their slow advance on ISIS positions in the al-Safa area in the al-Suwayda-Rif Dimashq desert. The SAA reportedly ambushed at least two groups of ISIS members killing six terrorists and destroying a vehicle.

Nonetheless, most of the area remains in the hands of ISIS. At least 15 SAA troops have been killed in the clashes there.

A unit of the Syrian Air Force Intelligence Directorate (SAFID) cracked down an ISIS cell in the village of al-Harrah in western Daraa detaining. According to reports, five suspects were detained, at least one SAFID servicemember was killed and an unknown number of terrorist was eliminated during the operation.

Some sources speculated that a new round of tensions between various militant groups in Idlib and western Aleppo has been caused by the recent Turkish-Russian agreement to impose a demilitarized zone there.

During a House Armed Services Committee subcommittee hearing on September 26, Assistant Secretary of Defense for International Security Affairs Robert Karem accused the Assad government and Russia of turning Idlib into the terrorist stronghold in Syria.

“There is no dispute that Idlib has become a hornet’s nest of multiple terrorist organizations. Regrettably, this is the product of the Russian and Regime approach to consolidating control on the ground in Syria. They have used de-escalation zones and local negotiated deals to purge areas in Syria and used Idlib as a dumping ground. And they have allowed the free transit of the worst terrorists to go to Idlib,” he stated hinting that the Pentagon’s official attitude is that efforts of the Syrian-Iranian-Russian alliance are allegedly leading to the growth of the terrorist threat in the war torn country.

On September 27, speaking at the UN General Assembly, Israeli Prime Minister Benjamin Netanyahu once again stated that Israel is adamant in its will to act in Syria, Iraq and Lebanon in order to deter what he described as “Iran’s aggression”.

He also made new allegations on Iran’s nuclear program claiming that there is a secret “atomic warehouse” near Tehran, which is capable of containing as much as 300 tons of “nuclear-related material.”

“Today I am disclosing for the first time that Iran has another secret facility in Tehran, a secret atomic warehouse for storing massive amounts of equipment and material for Iran’s secret nuclear weapons program,” Netanyahu stated adding that the data had been allegedly obtained as a result Israeli forces’ raid on Iran’s alleged “nuclear atomic archive”. A part of this data was presented by Netanyahu in April 2018 with similar claims that Iran has not abandoned its nuclear weapons ambitions.

Meanwhile, the US has renewed its efforts to create the so-called Arab NATO to confront the Iranian influence in the Middle East.

According to U.S. Deputy Assistant Secretary of State for Arabian Gulf Affairs Tim Lenderking, the new entity will be entitled the Middle East Strategic Alliance and Saudi Arabia, the UAE, Kuwait, Bahrain, Qatar, Oman, Egypt and Jordan would become the core of the bloc.

These developments show that the US-Israeli bloc is set continue its military, diplomatic and economic efforts in an attempt to reshape the current balance of power in the Middle East and to counter the growing Iranian influence.