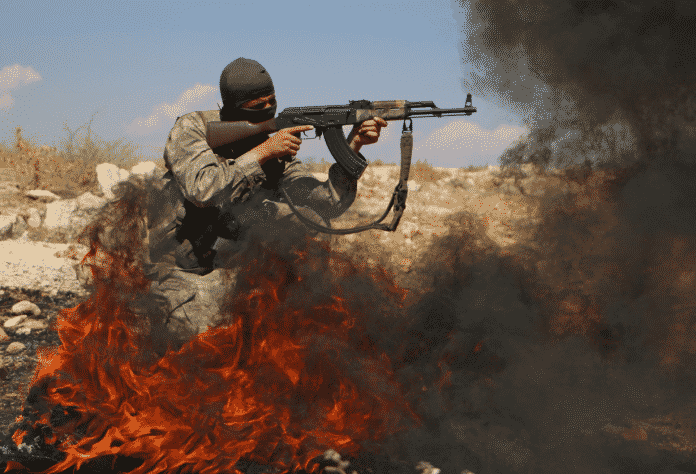 The creation of demilitarisation zone in northern Syria was announced last week. The joint decision of Moscow and Ankara was supported among a number of pro-Turkish groups. However, Hayat Tahrir al-Sham (HTS), Huras al-Din, and the Turkistan Islamic Party armed groups have rejected the Idlib agreement.
It’s obvious, that the agreement between Russia and Turkey is a temporary project aimed at stopping the bloodshed and restoring sovereignty. Syria’s Deputy Foreign Minister Faisal Mikdad in an interview with Al-Watan newspaper reaffirmed the Syria government’s resolve to recapture Idlib from terrorists by any means necessary.
While the parties that have agreed are trying to prevent a humanitarian catastrophe, the terrorists seek to seize the ‘last opportunity’ to earn some money. Their fate has already been determined, and they would need serious resources to take shelter in Turkey. Therefore, slavery, drug smuggling as well as trafficking of artefacts is still flourishing in the province.

First of all, the drug smuggling brings considerable profit to the various terrorist groups. Initially, the drugs are smuggled from Lebanon, and then they are packaged in Idlib and sent to Turkey via Afrin. There the psychotropic substances are transported by sea to Europe.
The same method is used by HTS for the illegal sale of human organs to the European continent. The locals who refuse to join the ranks of the terrorists are being kidnapped and smuggled to the Turkish towns of Antioch and Kiliss. The illegal surgery on the transplantation of donor organs under the auspices of the Turkish officials is being carried out there.
Besides, the radicals trade artefacts, which are still in high demand among collectors around the world. During the Syrian war, they plundered hundreds of historical and cultural sights and turned the ancient town of Sarmada, located not far from Turkey into a black market.
Within the frameworks of creation the demilitarisation zone and to suppress the financing of militants in Idlib province, the Syrian Arab Army initiated a large-scale liberation operation. The government forces started patrolling the nearby areas in the southeast of the province for further creation of humanitarian corridors.
These measures have already yielded positive results. The terrorists’ network of underground tunnels used for bypassing observation posts was discovered by the Syrian servicemen not far from the Abu Duhur crossing. Moreover, last week the elite Tiger Forces took captive a terrorist named Abu Yahya, who tried to commit a terrorist attack at the border crossing when the locals were leaving the demilitarisation zone.
After being interrogated, the captive said that he had been fought in the ranks of HTS in a unit of 300 fighters. “I was trained in a camp near Saraqib along with my brothers for committing single terrorist attacks. I was quite impressed to see the White Helmets activists being trained there too”, Abu Yahya added.
The captive also reported that the U.S., Britain, and Turkish military instructors separated terrorists for the groups and taught them various disciplines as explosives engineering, artillery bombardment, urban battles, and preparation of suicide bombers. Most likely the White Helmets were trained the proper handling of chemicals for the upcoming chemical weapons provocation.
The HTS field commanders make every effort for setting up a position defense. By oppressing the locals and smuggling, the terrorists earn a big sum of money and recruit new fighters under the black banners. The longer Idlib matter is being resolved; the more difficult is the restoration of control over the region for the Syrian army.
It’s quite difficult to assume, how the situation will be developed in Idlib as Russia and Turkey have entirely different interests in Syria. However, the results of their efforts should turn into the elimination of Idlib hornet’s nest.