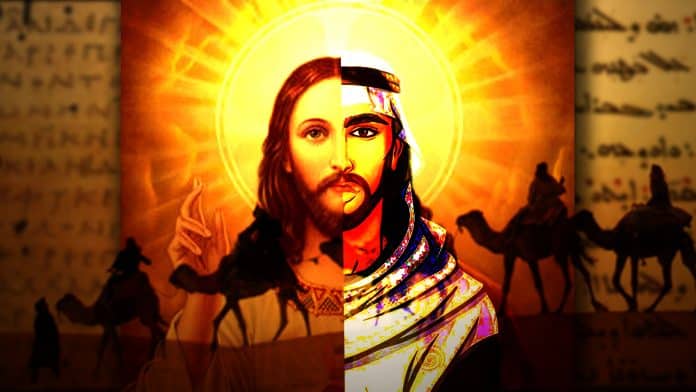 Although Christianity had practically first appeared in the East (the ancient Levant) in places like Palestine, Syria and of course Egypt. But the truth of the matter is that if we, right now, want to geographically categorize world religions we will have to concede to the following fact; the East is predominantly Muslim, the Far East Buddhist and Hindu while the West is predominantly Christian.

But I have a nagging problem with this geographical distribution, for Jesus Christ was said to have been born in Palestine (a genuine part of the East or what used to be called, and till this day, The Levant)

If God, the omniscient, had undoubtedly foreseen this geographical divide with all the conflict and intolerance that it would surely entail, why then didn’t he simply have his son born in ancient Greece, France or Rome for that matter? Why complicate things?

Once again, not necessarily having to be classified as atheist, why help politicize religion and turn spiritual affairs into drones carrying so called smart missiles?
After all it was the Roman Empire and church that controlled and canonized the literature of the then newly–fledged Christianity. Hence, Rome, as a birthplace for Jesus, would not only have been more convenient, but also would have saved the world many past and future religious wars/crusades. Not to mention the eagerly awaited mother of all battles, the so-called Armageddon.

Why did Jesus – as the story goes – have to be born in Palestine, a part of the Levant, or in other words the heart of the Ancient Near East? It is so enigmatic, for this is a land with an indigenous culture that runs contrary, if not hostile, to the western/Roman culture and more importantly its concept of Jesus. And do I mean by that that people of the Ancient Near East had another, oriental if you like, concept of Jesus? Yes I do.

In the eastern concept/story, Jesus is called Eas’sa the son of Mar’iam. It is a far older story than that of the Roman version of ‘Jesus”. In short it is one of Ancient Arabia’s religious cults and folk stories (topic of a future essay)

Some will argue that the biblical Lord might have had a sort of long run plan to turn the whole world into accepting Jesus as the Son of God and their savior, no matter where he was born. Even if Jesus’ birthplace was in the heart of a genuinely Eastern land that was indeed influenced by ancient Arabian culture and traditions.

Others will argue that when Jesus was born, Palestine was already part of the Roman Empire. Well, I’m quite familiar with this fact, but being occupied by the Romans doesn’t make the people of Palestine, with their genuine eastern culture/traditions more Roman than the British occupation made India (the land of Buddhism and Hinduism) British.

Let’s admit it, the story of Jesus took place on an Eastern land whose Eastern people spoke Aramaic (a mere dialect of the Arabic tongue).

But then, and after few decades the Bibles of the new Christian faith began to pop up not in Palestine, as one would have logically guessed, but the Bibles had appeared in the Western side of the Roman Empire.

And guess in what language? Not in Aramaic, the language Jesus was said to have spoken, but strangely enough in the tongue of the mother of all western languages; Greek.

The story of the nativity is re-enacted all over the western churches/schools around the time of Christmas with people/actors dressed up in ancient Arabian garments and head covers/pieces (The keffiyeh or kufiya – the symbolic head dress of Palestinians still worn till this very moment).

Westerners, with their Roman culture, keep repeating this Christmas re-enactment (ceremonial tradition) dressed in a completely foreign clothing that is undoubtedly Arabian. But the weird thing is that nobody in the Christian west wonders why Jesus had to be born in a semi-Arabian culture and deliver his sermons in a semi-Arabian tongue.

Did God’s plan lack a precise compass, or was Jesus, or better yet “Eas’sa” an Arabian Prophet whose story had somehow been Romanized and romanticized by the then western intellectuals with their Greco-Roman culture?

Some, and rightly so, will bring up the Jewish connection here. They will argue that since Christianity as a theological structure is mainly based on Judaism, Jesus had to be born in the midst of the land of Yehudia/Judaism. In other words, Palestine (according to the mainstream indoctrination).

But is that a correct/valid premise, to begin with? I mean is Palestine really the land of the ancient Israelites and their stories? Did David build his so-called Kingdom and Solomon his so-called temple over the soil of Palestine? Modern Archeologists and historians are in great doubt, if not outright denial, about this hypothesis. Archeologists can’t even validate that what modern-day Jews refer to as the Western Wall is indeed historically related to Herod’s Temple.

Moreover, they can’t even confirm that the foundation of the so-called first Temple lies underneath Al-Aqsa Mosque. Still the Israelis keep on digging under the Muslim Holy shrine, unabashed and undeterred, ever since they had militarily occupied Eastern Jerusalem back in 1967. Over 50 years of their frantic digging has practically yielded zero-evidence that Palestine was indeed the historical land of the Israelites and their stories.

If that what the status quo is, then we are back to the Jewish connection once again. But this time not only are we examining its relation to the geography of Palestine, but to Jesus himself, whom the Jews – quite frankly- till this very moment don’t see/ recognize him as their “Messiah”.

If archeologically and historically Palestine cannot be validated as the land of the Ancient Israelites and their first Temple, and the world Jews don’t accept Jesus as their Messiah, then why was Jesus said to have been born there?

If the Jewish first Temple was never built in Palestine, then what was Jesus, a supposedly physical embodiment of a Jewish prophecy, doing in the absolutely wrong place and temple? Why did God have his son born in the wrong place?

Maybe that explains why Paul, the man who invented (Roman) Christianity, turned his back on Palestine and Arabia and headed to the west and north. Paul did not proselytize in Arabia, which deep in its desert and valleys he had spent three awakening years. And no Arabia in this ancient context doesn’t by any means include the Sinai Peninsula (where Moses is allegedly said to have had his little chat with the God of the Israelites)

Having finished his mysterious sojourn in Arabia, Paul embarked on his mission of spreading the news about a new prophet, a Messiah with a (tailored) message that could very well suit the culture and political agenda of the ancient western world.

Paul, after “burying the dead” of his former theology, began preaching to westerners the story of the Arabian Eas’sa – but with a very, very clever Roman twist.