If you don’t think John Bolton is a puppet of the Israeli regime, then think again. Start reading Bolton’s “To Stop Iran’s Bomb, Bomb Iran” article, which was published in the New York Times in 2015.[1]

The Zionist raging bull has recently come out of the woodwork and declared to Tehran: “We are watching, and we will come after you.”[2] How is Bolton going to come after Iran? The Zionist whore continued to say that Iran will have “hell to pay” if it challenges the United States. Bolton: “According to the mullahs in Tehran, we are ‘the Great Satan,’ lord of the underworld, master of the raging inferno.”[3]

It has been reported that “1 million veterans injured from the fighting in Iraq and Afghanistan.”[6] And “Afghanistan and Iraq veterans are ‘the most damaged generation ever.’”[7] There is more:

“More than half of the 2.6 million Americans dispatched to fight the wars in Iraq and Afghanistan struggle with physical or mental health problems stemming from their service, feel disconnected from civilian life and believe the government is failing to meet the needs of this generation’s veterans.”[8]

Why is the United States supporting Saudi Arabia to destroy Yemenis at this present moment? Are all these deaths and suffering good? And if they are not good, was Iran wrong in saying that the Zionist world is using America to destroy countries in the Middle East? Bolton, of course, is still perpetuating the dumb idea that Iraq was a success. He is dumb on purpose, therefore you cannot reason with him. His allegiance is to Israel first, and America is an afterthought.

It was the Ayatollah Khomeini who said that “international Zionism is using the United States to plunder the oppressed people of the world.” Khomeini articulated the term the “Great Satan” in 1979 largely because he himself witnessed what “international Zionism” was doing to several countries in the Middle East and the West. We must keep in mind that the Anglo-American coup in Iran took place in 1953, and it seemed to vindicate what Khomeini was saying.

“There is no crime America will not commit in order to maintain its political, economic, cultural, and military domination of those parts of the world where it predominates,” Khomeini said back in 1979.[9] “By means of its hidden and treacherous agents [i.e., the Neoconservatives and other warmongers], it sucks the blood of the defenseless people as if it alone, together with its satellites, had the right to live in this world. Iran has tried to sever all its relations with this Great Satan and it is for this reason that it now finds wars imposed upon it.”[10]

This uncomfortable but true statement is still relevant today. Just take a look at how John McCain and Lindsey Graham are toe-dancing around important issues and perpetuating the idea that America needs to overthrow Bashar al-Assad and get into conflict with Russia. Just take a look at how the Neoconservatives have overwhelmingly taken over U.S. foreign policy.[11] These people are completely mad. Khomeini wouldn’t mind calling them Satanists.

It must also be noted that these people don’t care about America or its people at all. They only care about fulfilling an essentially satanic enterprise, which is congruent with the “Greater Israel.” As my dear friend Vladimir Golstein of Brown University has put it, the Neocons are incapable of understanding reality.[12] In that sense, they cannot flesh out a coherent system without falling into their own trap. Scholar Michael MacDonald has documented:

“As [the Neocons] were mocking Clinton in the late 1990s as cowardly for his caution in the face of Saddam’s brutality, central Africa was engulfed in war and chaos. Around 5,400,000 people, mostly in Congo, perished in the convulsions and the starvation and disease they caused from 1998 to 2003.

“Yet the Weekly Standard, a reliable guide to neoconservative priorities, published just two stories on Congo during these years. In the same time span it published 279 articles on Iraq. Neoconservatives were bent on projecting power in the Middle East, not on engaging in humanitarian do-goodism.”[5]

The fact that Khomeini brought “international Zionism” to the fore indicates that his target was not decent Americans who virtually have no clue of what is really going on; Khomeini’s target was “international Zionism,” which we all know has sucked the blood out of Palestinian men, women and children and spit out the human bone. This has been going on since 1948. And if 1948 is too far in the past, then Iraq, Afghanistan, Libya, Pakistan, Yemen, and Syria should be case studies for modern observers and scholars. In fact, Israeli historian Benny Morris unequivocally declared:

Morris is also the author of the Cambridge text The Birth of the Palestinian Refugee Problem, 1947-1949, in which he documents throughout that raping Palestinian girls and women was rampant in 1948.[14] Other Jewish scholars such as Ilan Pappe have documented the same thing.[15] 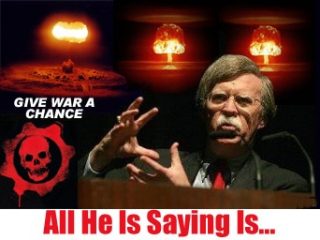 Bolton obviously doesn’t want to know any of this. He has been hired to do a hatchet Zionist job, and he doesn’t want to pay close attention to historical facts. He declared:

“The Iran deal was the worst diplomatic debacle in American history. It did nothing to address the regime’s destabilizing activities or its ballistic missile development and proliferation. Worst of all, the deal failed in its fundamental objective: permanently denying Iran all paths to a nuclear bomb.

“The United States is not naive. We will not be duped, cheated, or intimidated. The days of impunity for Tehran and its enablers are over. The murderous regime and its supporters will face significant consequences if they do not change their behavior. Let my message today be clear: We are watching, and we will come after you.”[16]

Bolton is just following what Benjamin Netanyahu has said a few days ago. Netanyahu things that the entire world does not want to listen to his “evidence,” which he thinks shows that Iran is still building nuclear weapons. This is what the mad man in Tel Aviv told the UN:

“Today, I am disclosing for the first time that Iran has another secret facility in Tehran, a secret atomic warehouse for storing massive amounts of equipment and materiel from Iran’s secret nuclear program.”[17]

The evidence? Well, the mad man presented none, obviously because he had none. He had to concoct blatant lies and fabrications to make a point, even though people of reason will look at him as an ideologue. As Tim Anderson of the University of Sydney has pointed out, Netanyahu “is a dangerous man and he is creating, like his mentor in the US, pretexts, which were a bit of credibility, pretexts that he will use and has used for almost arbitrary attacks.”[18]