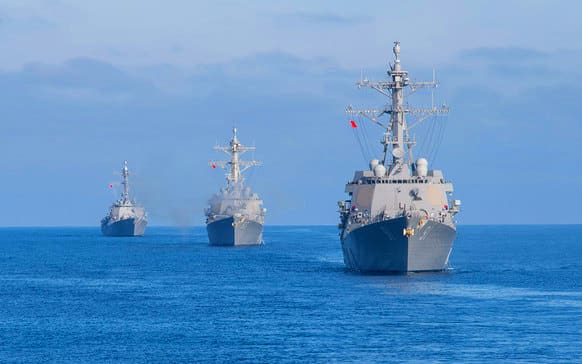 [ Editor’s Note: The US is asserting it has the right put a naval blockade on Russian energy exports, even if our EU and NATO allies choose Russia as a more cost effective and dependable supplier.

A naval blockade is an act of war. If you doubt this, ask the Japanese. A declassified document that David Irving dug up exposed how Churchill and Roosevelt toughened the State Department’s demands on Japan that, if it did not pull out of Manchuria, the US would blockade all scrap metal and oil imports to cripple Japan’s major industry.

They knew Japan could not accept this and would be pushed into a preemptive naval strike to secure its oil lines, presumably on Manila.

They were wrong about Manila. Roosevelt desperately needed war, as his much ballyhooed New Deal program had not created any permanent jobs.

I am not the only one who thinks that Trump, the NeoCons and the Deep State folks are borrowing a page from world war ignition techniques. We have been concerned that, with the US growing a huge national debt and with the need to keep the debt bubble afloat, it would have to go into PacMan mode, gobbling up every potential competitor.

The US Interior Secretary has rolled out a classic colonialist tactic of making serf colonies buy at inflated prices to ensure high margins for elite profit-takers.

To date, the US public and all of its civic institutions are standing down in opposing this trend, which cannot result in a happy ending for the public. But, the public will not be able to play the surprised victim when the hammer falls … Jim W. Dean ]

The United States could impose a naval blockade on Russia if necessary to limit its role in controlling global energy supplies, according to a senior US official.

“The United States has that ability, with our Navy, to make sure the sea lanes are open, and, if necessary, to blockade … to make sure that their energy does not go to market,” Secretary of the Interior Ryan Zinke said Friday at an industry event hosted by the Consumer Energy Alliance.

Zinke underscored that hydraulic fracturing, or fracking, along with the shale energy boom had put the United States in an advantageous position over Russia, by making the country less dependent on foreign energy.

The administration of President Donald Trump has fiercely opposed energy projects by Russia, including the Nord Stream II pipeline to Germany, because it would give Moscow leverage over Europe. Trump has been pressuring European countries to purchase more US natural gas and reduce their dependence on Russian energy.

“President Trump has been clear: America has to be energy dominant,” Zinke said. “We have re-lit the pilot light of American energy under this President. We are incorporating industry innovation, best science and best practices to improve reliability, safety and environmental stewardship. Our energy strategy is ‘all-of-the-above,’ leveraging every source of energy to take our nation forward. I am bullish about America’s energy future.”

The secretary said he believed Russia had asserted itself more forcefully in the Middle East in an effort to control the energy market there.

“Russia is a one trick pony,” Zinke said. “I believe the reason they are in the Middle East is they want to broker energy just like they do in Eastern Europe, the southern belly of Europe.”

On Iran, the official said, the Trump administration was following a similar strategy in order to squeeze the oil exporter out of the energy market.

“We can do that because … the United States is the largest producer of oil and gas,” Zinke said.

Addressing the UN General Assembly on Tuesday, President Trump indicated that the US was ready to “export our abundant affordable supply of oil, clean coal, and natural gas.”

The remarks came after OPEC countries and Russia ignored Trump’s call to bring down oil prices and increase their production to make up for the upcoming US sanctions on Iranian oil exports.